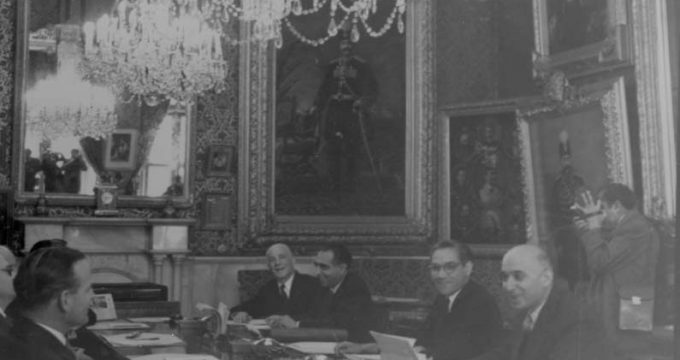 The Consortium Agreement of 1954

A year after the overthrow of Premier Mohammad Mossadegh the new Iranian government concluded its predecessor’s negotiations with Britain over the Anglo – Iranian Oil Company (BP). The Dispute was finalized with the incorporation of an international oil consortium which reduced  BP’s share to 40%.

With a pro-Western Shah and the new pro-Western Prime Minister, Fazlollah Zahedi, Iranian oil began flowing again and the Anglo-Iranian Oil Company, which changed its name to British Petroleum in 1954, tried to return to its old position. However, public opinion was so opposed that the new government could not permit it.

Under pressure from the United States, British Petroleum were forced to accept membership in a consortium of companies which would bring Iranian oil back on the international market. It was incorporated in London in 1954 as a holding company called Iranian Oil Participants Ltd (IOP).

This group of companies at various stages came to be known as the Supermajors or the “Seven Sisters” or the “Consortium for Iran” cartel and dominated the global petroleum industry from the mid-1940s to the 1970s. Until the oil crisis of 1973 the members of the Seven Sisters controlled around 85% of the world’s known oil reserves.

All IOP members acknowledged that National Iranian Oil Company (NIOC) owned the oil and facilities in Iran, and IOP’s role was to operate and manage on behalf of NIOC. To facilitate that, IOP established two operating entities incorporated in Netherlands, and both were delegated to NIOC.

Similar to the Saudi-Aramco “50/50” agreement of 1950, the consortium agreed to share profits on a 50–50 basis with Iran, “but not to open its books to Iranian auditors or to allow Iranians onto its board of directors.” The negotiations leading to the creation of the consortium, during 1954-55, was considered as a feat of skillful diplomacy for the “Seven Sisters”. Some viewed the move as one to quell the rising tensions of Iranians since it allowed IOP to divert and hide profits with ease – effectively controlling Iran’s share of the profits.

Financially, this agreement did not differ much from other agreements in the Middle East, because Iran’s revenues would not move beyond the 50% which was the basis in all of them. In addition to 10 million Pounds it received from Iran, as compensation for Kermanshah refinery and domestic distribution facilities, the British Petroleum also obtained from its new partners who had 60% of the shares of the consortium, the amount of 214 million Pounds (600 million U.S. Dollars) as key money. From the point of view of Iran, the contents of this agreement were much more unfavorable than conditions set forth several months earlier in the joint “Churchill-Eisenhower” proposal to Dr. Mossadegh.

Iranian oil production in the first 3 years reached the pre-nationalization era level. From then on, production gradually increased. Production operations that were limited to Masjid-e Soleiman and Haftgel fields up to the time the oil industry was nationalized quickly expanded and covered the huge oilfields of Gachsaran, Ahwaz and Aghajari.