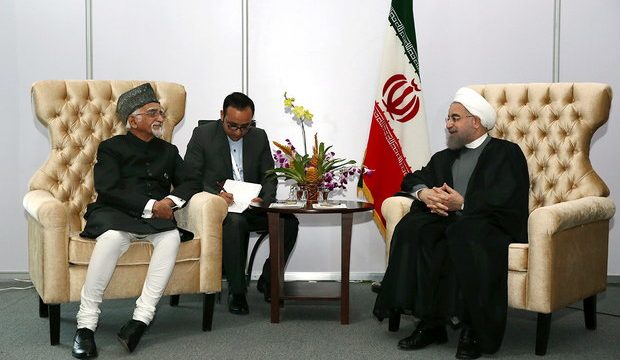 MARGARITA ISLAND, Sep. 18 (MNA) – Iranian President Hassan Rouhani stressed that economic cooperation between Iran and India needed to develop alongside the two countries’ relations in all other areas.

President Hassan Rouhani made the remark in a meeting with Indian Vice-President Mohammad Hamid Ansari that took place on the sidelines of the 17th Non-Aligned Movement Summit on Saturday afternoon on Margarita Island in Venezuela.

The Iranian President went on to note the extensive capacities for developing relations between the two countries, adding “certainly, a comprehensive development of Tehran-New Delhi cooperation will be to the benefit of both nations as well as the whole region.”

Rouhani then referred to the many agreements reached between the two sides during the recent visit of Indian Prime Minister to Tehran, adding “the faster implementation of the agreements, particularly in regard to banking and rail cooperation and the development of Chabahar Port, can give renewed impetus to bilateral relations.”

The President further touched upon the regional issues, adding “while the region is gripped with extremism and terrorism, improving regional cooperation between Tehran and New Delhi is imperative for the establishment of stability and security in the region, and this cooperation will certainly benefit all regional states.”

The Indian Vice-President, for his part, highlighted the need for expansion of bilateral and regional cooperation with Iran, saying the two countries could help restore peace and prosperity across the region.

“The two countries’ relations have always been strong and the visit of Prime Minister Narendra Modi to Tehran has just begun a new chapter in bilateral cooperation,” Mohammad Hamid Ansari added.

He went on to add that the agreements reached during the visit are being implemented, adding “Chabahar will soon become a keyword to the relations of Iran and India and the expansion of their cooperation all across the region.”