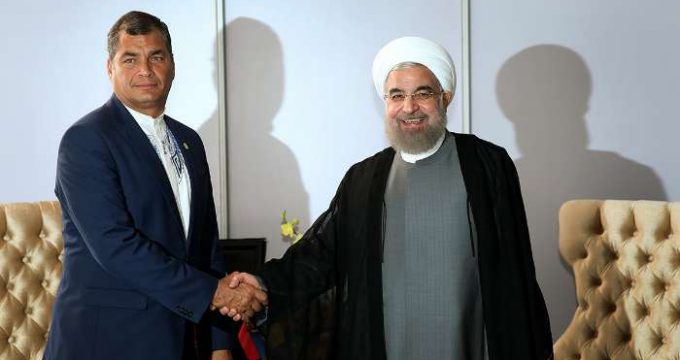 TEHRAN, Sept 18 (Shana) — President Hassan Rouhani says Tehran supports any move for stabilization of the market and improvement of oil prices based on justice, fairness and observation of fair quota for the producing countries.Speaking to Ecuador President Rafael Correa on the sidelines of the NAM Summit in Venezuela on Saturday, Rouhani said the Islamic Republic of Iran welcomes expansion of cooperation with Ecuador in all fields.

He said strong bonds between Iran and Ecuador and their common goals along with their abundant commonalty in international and regional issues all necessitate further expansion of bilateral ties.

He went on to say that lift of sanctions has provided a suitable opportunity for expansion of bilateral relations.

He noted that Iran is fully prepared to provide Ecuador with its potential and experience in the scientific, technological and energy domains.

Referring to the upcoming meeting of the OPEC and non-OPEC producers in Algeria, President Rouhani said instability and falling oil prices are harmful to all countries, especially oil producers, and Tehran welcomes any move aimed at market stability and improvement of oil prices based on justice, fairness and fair quota of all the oil producers.

Correa said in turn that Ecuador nation and government has always been appreciating the campaigns of Iranian government and nation and always supported them.

He said lift of unjust sanctions provides the two countries with an opportunity to upgrade ties and they should benefit from the chance.

“Ecuador is determined to expand cooperation with the Islamic Republic of Iran in all domains and to this end, promotion of mutual banking cooperation is essential to proceed with projects and plans.”

He referred to the upcoming meeting of the oil producers and consumers in Algeria and said justice in price of oil is essential and all countries should strive for success of the meeting.