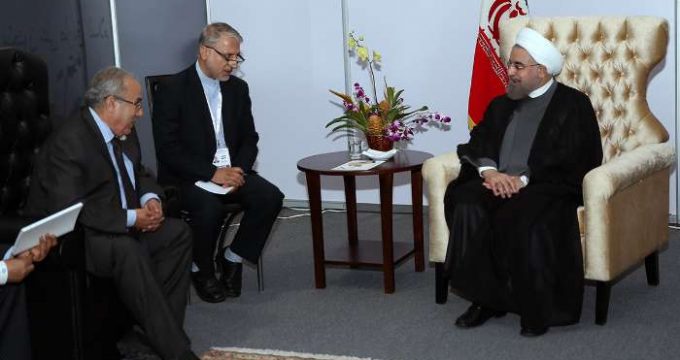 TEHRAN, Sep. 18 (MNA) – President Rouhani said the friendly relations between Iran and Algeria need to be developed at all levels.

Speaking at a meeting with Algerian Foreign Minister Ramtane Lamamra on the sidelines of NAM summit in Venezuela, Iran’s Hassan Rouhani said the two countries have always backed each other in difficult times and today, given the removal of cruel sanctions, grounds are ready to build momentum in boosting bilateral relations especially in economic arenas.

President of Iran expressed hope that a new window will be opened in economic ties between Iran Algeria favoring both nations.

He also referred to efforts to reach a positive outcome at the forthcoming OPEC meeting in Algeria and emphasized the need to bring about stability to the oil market by reaching reasonable price levels; “I hope cooperation and close interaction will lead to effective steps in meeting collective interest of all members,” he continued.

Special envoy of the Algerian minister and Foreign Minister of the North African country Ramtane Lamamra, for his part, conveyed the message of his country’s president to Iran’s Rouhani asserting “relations between Tehran and Algiers are built upon independence of thought and enough determination exists to further expand existing friendly relations with Iran.”

“Tehran and Algiers hold serious determination to develop bilateral relation and cooperation to benefit the two nations as well as regional states,” underlined the Algerian foreign minister noting that Algeria could act as Iran’s gateway to the African market.