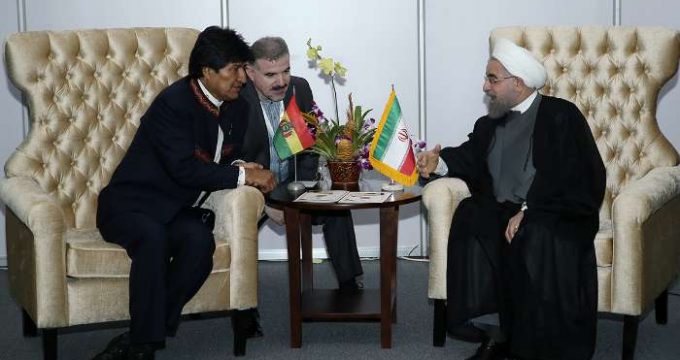 He made the remarks Saturday evening in a meeting with the Bolivian President Evo Morales on the sidelines of the 17th Summit of the Non-Aligned Movement (NAM) held here in northern Venezuela.

Stressing Tehran’s will to establish friendship and cooperation with the Latin American states, the President said he saw no restrictions on growing cooperation between Iran and Bolivia as stronger relations would benefit both nations.

He went on to voice Tehran’s readiness to help La Paz with its development programs noting that private sectors and state-owned companies in both countries should be encouraged to take joint investment projects and cooperate especially in banking areas.

Meanwhile, President Morales praised the successful performance of the Iranian companies involved in economic projects in his country and called for further contribution of Iranian firms in Bolivian construction and economic fields.

He also invited his Iranians counterpart to take part in the upcoming summit of the Gas Exporting Countries Forum (GECF) to be held in Bolivia in 2018.

The two presidents also underlined the need for collective efforts to create stability in the oil market.