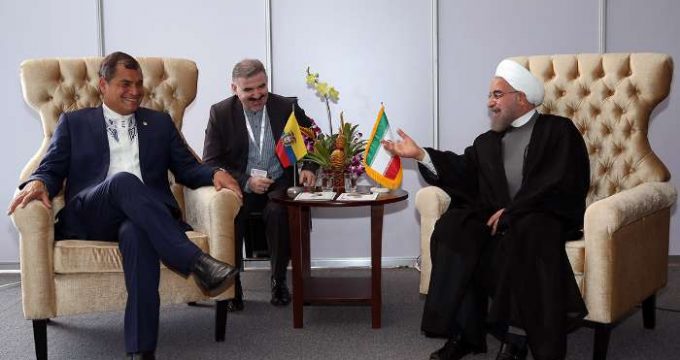 The meeting was held on the sidelines of the 17th Summit of the Non-Aligned Movement (NAM) here.

He added that Tehran welcomes widening of relations with Quito in all areas.

President Rouhani stressed that cordial relations between Iran and Ecuador and their common goals and positions regarding major international and regional developments make it necessary that the two capitals further promote their bilateral relations.

President Rouhani also said that lifting of the anti-Iran sanctions since January 16 was an ample opportunity for fostering bilateral cooperation.

Iran is ready to share its experiences in the fields of science, technology and energy with its friendly country of Ecuador, Rouhani added.

He also stressed the need to improve banking relations in order to accelerate expansion of bilateral ties between Iran and Ecuador.

Turning to the coming meeting of oil producing countries in Algeria which is slated for Sept. 26-28, President Rouhani said instability in the oil market and reducing of its price would damage all world countries, oil producing states in particular.

Members of the Organization of the Petroleum Exporting Countries (OPEC) as well as the non-OPEC countries are to meet in the Algerian capital during an energy conference in late September.

Tehran welcomes stability in oil market and allocation of a fair price to it, said the President.

For his part, the Ecuadorian president said that lifting of unjust anti-Iran sanctions has created an opportunity for further bilateral ties between Quito and Tehran.

Correa said that his country is determined to develop bilateral ties with Iran in all areas including banking relations which is an essential issue.

As for the question of oil, he said that fixing a fair price for oil is a must.