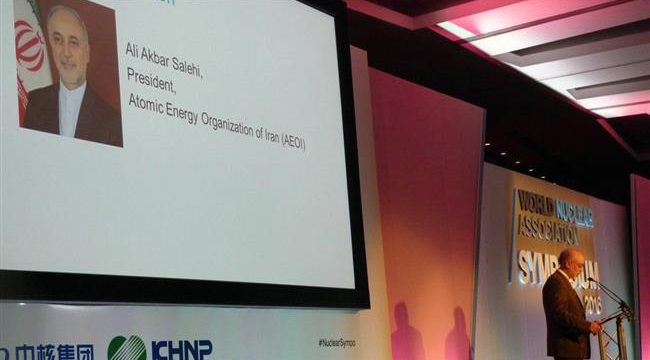 TEHRAN, Sept 17 (Shana) – Head of the Atomic Energy Organization of Iran (AEOI) Ali-Akbar Salehi says long-term generation of 20,000 megwatts of nuclear power is Iran’s target. Addressing the World Nuclear Association Symposium 2016 in London on September 16, Salehi said to achieve the goal, Iran counts on Bushehr Nuclear Power Plant and two more power plants, that contract for construction of which in Bushehr has been signed with Russia in the past few days.

He referred to the interest of the Persian Gulf states to develop nuclear energy and said Iran is ready for partnership and cooperation with the states and put its experience at their disposal.

He noted that in the post-JCPOA era, Iran has signed nuclear agreements with countries and owners of the nuclear industries, inviting them to contribute to AEOI projects.

Meanwhile, Salehi told the Guardian that ‘our Supreme Leader once stated: ‘The Islamic republic will not primarily breach the deal,’ but at the same time, I do not overrule the threats that may endanger the deal.’

The Guardian has published this interview on September 16.

About his Thursday meeting with the UK chancellor of the exchequer, Philip Hammond, Salehi said he had a good relationship with Hammond and that the chancellor had sounded positive during their meeting.

“He stated that they have this file on their agenda, and that they are pursuing the issue very seriously, and they are trying to improvise ways and means that would remove the impediments that lie ahead of this banking cooperation with Iran,’ Salehi said.

Salehi refused to comment on the presidential candidacy of Donald Trump, saying it was an internal issue of another country. ‘The political credibility of the US will be undermined if they take any measures that would jeopardize the JCPOA – to best of my knowledge the European Union is very supportive and Chinese and Indians and [the rest of] the international community are all very happy,’ he said.

‘The world would be safer if, besides contemplating peace, we endeavor to attain it,’ Salehi stressed.

Salehi noted that the JCPOA can set up a new political and diplomatic role model in resolving major international crises.

‘…, so it’s incumbent upon both sides to do their best, to keep the integrity of this deal and not let it break down,’ Salehi was quoted by the Guardian, a British newspaper.

‘The nuclear agreement was in the interest of both Iran and the West and that it would be a pity if it was derailed,’ Salehi said talking of Iran’s nuclear deal known as the Joint Comprehensive Plan of Action (JCPOA) with the world powers on July 14, 2015.

‘Iran has fully complied with its commitments under last year’s landmark nuclear agreement, but eight months after the official removal of sanctions, the west is failing to deliver on its promises,’ Salehi who is also Iran’s Vice President said.
‘If the agreement was to remain intact, both sides had to meet their commitments,’ Salehi stressed.

‘As has been stated by the International Atomic Energy Agency (IAEA), Iran has remained committed to its commitments,’ Salehi said, adding ‘while the other side – it’s very clear now to public opinion and it’s not a secret – has not really delivered on the promises; that the sanctions would be removed and that banking transactions would go back to normal, that trade would speed up and economic relations would be enhanced. These have not been materialized to the extent that we expected.’

Warning about the excessive demands on the part of the Western side, Salehi said, ‘We see, on and off, that there are some demands from the other side, that those demands go to some extent beyond the JCPOA.’

‘At the same time, we see that the other side has not fully delivered its promises, like the issue of big banking doing business with Iran … If there is a demand of overcompliance then things would get more complicated.’

‘There are hints to do away [with] or to rewrite the deal, and on the other hand, to unilaterally impose excessive oversighting and overcompliance to the point of Iran’s discouragement and ultimate submission,’ he warned.