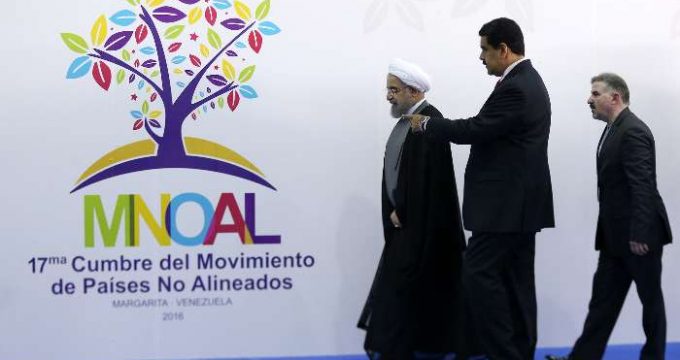 The President made the remarks in his speech to the Summit of Non-Aligned Movement in Caracas.

‘As against the unreal fundamentalist images of Iran portrayed by propagandist and warmonger media, my country has never followed an approach to suggest its national interests collide with global interests. And our support for the world’s righteous movements does not mean confrontation with accepted and legitimate human values.

‘Nor does it mean interference in the internal affairs of the others. Conversely, Iran’s discursive doctrine, originating from religious causes, is against imperialism and global trouble-making which is in accordance with the new intellectual developments and global freedom-seeking literature as well as the Charter of the United Nations.

‘Causes such as independence, freedom, republicanism, democracy and self-determination through the ballot box are considered as not only religious and national but also global values.

‘In recent years, disappointing and unpleasant events for the people of Syria, Yemen, Iraq and Libya as the result of selfish and destructive competition among specific states have hurt the consciousness of people across the world, signaling the irresponsibility of the big powers towards avoidable wounds inflicted every day on innocent bodies.

‘The world is aware that the Islamic Republic of Iran was the first country which warned against the global danger of Takfiri terrorism in Syria. While a number of irresponsible groups in the Middle East and the West were busy equipping and training Takfiri terrorists, Iran stood against Iraq and Syria to confront alone with one of the most brutal terrorist organizations of history.

‘The hands of such groups and their financial and military supporters are spattered in blood which will never drain. It was like a historical satire when the brutal attacks of these groups spread outside Syria and supporters of Takfiri terrorists decided reluctantly to form an inefficient and hollow coalition against terrorism.

‘This is while the global community has so far failed to restore the violated rights of the people of Palestine and end the occupation. Not only have big powers not helped alleviate these pains, but they are playing a notorious role in the escalation of violence, murder, war, poverty and displacement of millions of people in the developing states. All these events are indication of the fact that we should not pin our hope on big powers to achieve security, development and progress.

‘Unfortunately, a small number of Non-Aligned Movement Member States have betrayed the primary principles of our movement and are playing a role in disrupting peace and interfering in the internal affairs of other Member States by accompanying the terrorists.

‘These misguided policies have had no outcome but destruction and historical dishonor for these countries and the terrorist groups supported by them. The divine tradition and historical experience recognize the reality that denying legitimate demands of nations would bring about nothing but enormous costs and dishonor. Moreover, the aggressor powers and interventionists will have no option but to surrender against the demands of the nations.

‘I, on behalf of the noble people of Iran, proposed a resolution on the World Against Violence and Extremism to the United Nations General Assembly which resulted in the adoption by consensus of two resolutions in 2013 and 2015.

‘The Non-Aligned Movement enjoys a large capacity for the advancement of such ideas within the framework of the United Nations.’