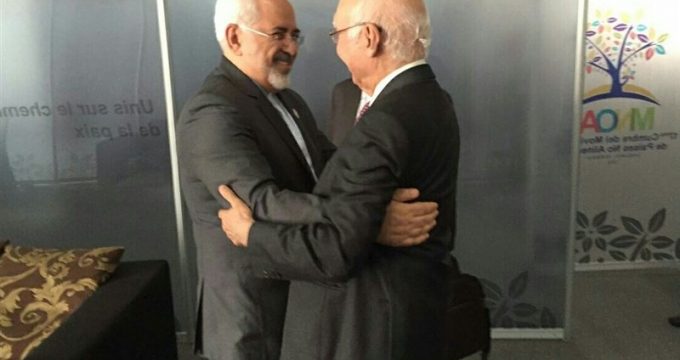 Islamabad, Sept 17, IRNA – Pakistani Adviser to the Prime Minister on Foreign Affairs Sartaj Aziz during his meeting with Iranian Foreign Minister Mohammad Javad Zarif in Venezuela, has appreciated Iran’s role as the President of the Non-Aligned Movement (NAM).

According to a statement of Pakistan’s foreign ministry, the two sides during the meeting which took place on sidelines of 17th NAM Summit in Venezuela, discussed bilateral relations and regional developments and Afghanistan issue.

Aziz also briefed his Iranian counterpart on the situation in Indian Kashmir and Pakistan-India relations.

He also appreciated Iran’s role as the President of NAM.

Iran is the outgoing President, having led the NAM process since 2012.

Aziz is leading Pakistan’s delegation to the 17th NAM Summit being held in Margarita Islands, Venezuela, from 15-18 September 2016.

The Ministerial segment of the Summit concluded yesterday after finalizing the NAM declaration and the Outcome Document, which will be presented to the Summit for adoption on 18 September 2016.