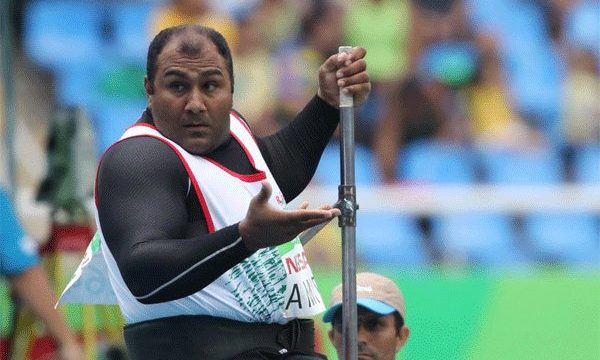 Amiri’s first attempt was an 11.26 meter throw, but his second and third throw resulted in a foul. The 34-year-old Iranian athlete managed a 10.62 meter throw in his fourth attempt, an 11.40 meter in his fifth and 11.11 meter in his final attempt. Amiri’s 11.40 meter throw won him the second place and a silver medal at the completion, while his Bulgarian opponent won gold with a throw of 12.33 meters and a Polish athlete grabbed bronze. Amiri’s silver was Iran’s 20th medal at Rio Paralympics.

Iran is now placed at 14th place in the medals’ standings, with 7 Gold, 7 Silver, and 6 Bronze medals.

The 15th round of Paralympics kicked off in Rio on Sep. 8 and will run through 18 September. 4,500 athletes from 159 countries are participating in the event.  The Mina delegation of Iranian Paralympians at the Rio Paralympics is comprised of 111 sportspeople who vie at 12 fields of the 23 athletics.