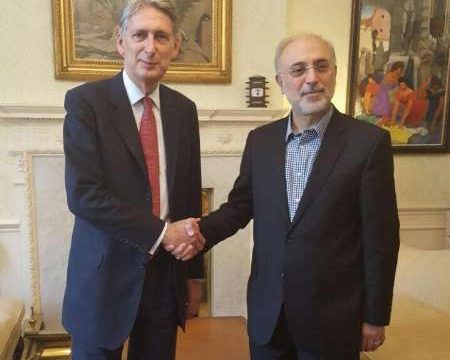 Head of the Atomic Energy Organization of Iran (AEOI) Ali Akbar Salehi and UK Chancellor of the Exchequer Philip Hammond have exchanged viewpoints on the banking restrictions facing Iran and a new dawn for the country’s economy after nuclear-related sanctions were lifted following the landmark agreement between Tehran and the six world powers.

During a meeting in London on Thursday evening, the pair explored avenues for the further expansion of Iran-Britain economic and trade relations, and stressed the need for the swift removal of all banking hurdles and the full implementation of the nuclear deal struck between Iran and the P5+1 group of countries last July.

“Although many issues were resolved and many banks resumed their relations with Iran after the implementation of the Joint Comprehensive Plan of Action (JCPOA), big banks are yet to return to do business with us. This issue was specifically brought up during talks with the chancellor of the exchequer,” Salehi told reporters after his meeting with Hammond.

Salehi further pointed to the measures being adopted by Britain’s top business official saying, “I assume that they are trying to clear the hurdles and find solutions to the existing problems.”

“The work is progressing and the problems are being dealt with seriously so that they are swiftly resolved,” the senior Iranian official said.

Salehi reaffirmed Iran’s full commitment to its obligations under the JCPOA, saying Tehran expects the other side to do the same.

The two officials also emphasized the need for necessary measures in order to open up Iran’s business environment to the global markets, and facilitate European investors’ engagement with Iran.

Iran and the five permanent members of the UN Security Council — the United States, France, Britain, China and Russia — plus Germany finalized the text of the JCPOA in Vienna, Austria, on July 14, 2015. They started implementing the agreement on January 16.

However, many large European banks still refrain from engaging in transactions with Iran for fear of US penalties.