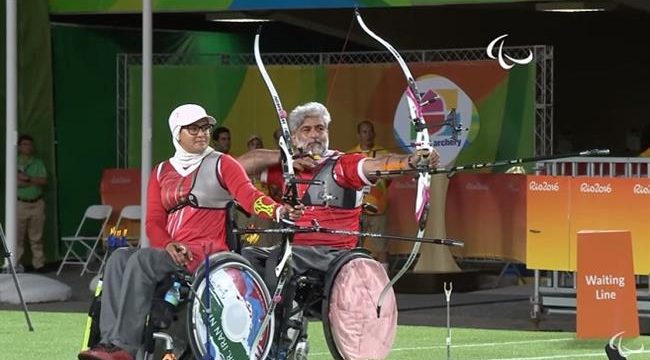 Iranian Paralympic archers have picked up a silver medal at the 2016 Summer Paralympics in Rio de Janeiro, Brazil.

On Sunday afternoon, 46-year-old Iranian sportsman Ebrahim Ranjbarkivaj plus Paralympic and Olympic archer Zahra Ne’mati vied in the mixed team recurve open competitions at the Sambadrome Marquês de Sapucaí parade area in Rio, and lost to the Chinese squad of Zhao Lixue and Wu Chunyan 3-5 in the title showdown to claim the second spot.

The Italian contingent, consisting of Roberto Airoldi and Elisabetta Mijno, edged past the Mongolian team 5-1 to settle for the bronze medal.

Ne’mati said after the final competition, “It was such a fine final, and I performed much better than the previous contests. We did not expect to receive the silver medal.”

The Islamic Republic of Iran’s National Paralympic Committee has dispatched a 111-strong delegation, dubbed the Mina Caravan, to the 12-day sporting event. Iranian sportsmen and women are in action in 12 different fields.

Iranian athletes have so far clinched four medals — one gold and three silvers — putting the Islamic Republic in the 32nd slot of the medal count table.

The United States, Brazil, Uzbekistan, Australia, the Netherlands, Germany and Tunisia are in the 4th to 10th places respectively.