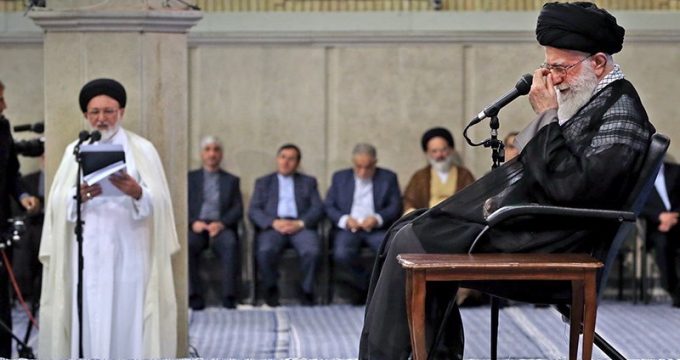 Because of Saudi rulers’ oppressive behavior towards God’s guests, the world of Islam must fundamentally reconsider the management of the two holy places and the issue of hajj.

Foreign Minister Mohammad Javad Zarif says the religion of Iran and most of the Muslim world is nothing like that of Saudi Arabian Wahhabis.

Iranian President Hassan Rouhani called on all parties to the July 2015 nuclear agreement between Tehran and world powers, known as the Joint Comprehensive Plan of Action (JCPOA), to quickly fulfill their obligations under the deal.

Supreme Leader of the Islamic Revolution Ayatollah Seyyed Ali Khamenei on Wednesday demanded an international and Islamic inquiry into deaths of Iranian pilgrims and blood money the Saudis must pay to the families who lost their loved ones.

Foreign Ministry to follow up Leader’s message on Hajj

The Foreign Ministry will follow up Supreme Leader’s message on this year’s Hajj in all aspects, it was announced on Thursday by Deputy Foreign Minister for Asia and Pacific Affairs Ebrahim Rahimpour.

The execution operations on the construction of the second unit at the site of the Bushehr nuclear power plant, known as the Bushehr-2 project, has begun on Sat. with Iran’s first VP in attendance.

US admits Iran honors its obligations in nuclear deal

A senior US State Department official has verified Iran’s commitment to its nuclear obligations.

Tehran seeks to step up its military and counterterrorism cooperation with Moscow, Iran’s vice-president said.

No commitment given to FATF

Economy minister, while stressing that no commitment has been given to Financial Action Task Force (FATF), voiced Iran’s readiness to launch conditional cooperation with the international body.

Polish refiner Lotos could sign a long-term oil deal with Iran after receiving its first supplies from Iran last month, the deputy head of Lotos said on Thursday.

Iran’s Auto Importers Association announced that the recent report about “lifting the ban on luxury cars” has been misinterpreted. According to the director of the organization, Maysam Rezaei, the new court ruling only applies to cars that have entered the country before the imposition of the ban on imported cars with engines over 2.5 liters.

The Algerian energy minister has lent weight to Iran’s bid to regain market share through stepped-up oil production despite objections from Saudi Arabia.

President of Iran Wrestling Federation Rasoul Khadem has been elected as the new member of United World Wrestling’s executive committee known as the bureau.

FAO signed an agreement with the Urmia (Oroumiyeh) Lake Restoration Commission (ULRC) in Tehran to lend substantive technical assistance for the execution of an integrated program that aims ultimately to secure sustainable water resources management in the Urmia Lake basin.

Iran is home to 19 UNESCO-registered sites, including the ancient city of Bisotun and the ancient Persian capital of Persepolis.

The remains of an elephant which date back to two million years ago were found in a county named Bileh Savar located in Iran’s north-western province of Ardabil.

War and poverty have forced 50 million children around the world from their homes, according to UNICEF.

Russian Foreign Ministry has announced that Palestinian President Mahmoud Abbas and Israeli Prime Minister Benjamin Netanyahu have agreed “in principle” to meet in Moscow as Russia hopes for the revival of the so-called peace talks.

Millions of Muslims gather in Mecca for Hajj pilgrimage

Millions of Muslims from around the world are gathering in Saudi Arabia to perform special ceremonies for the annual Hajj pilgrimage.

Russia and the United States have reached an agreement on a ceasefire in Syria as part of a plan to find a political solution to the years-long crisis in the Arab country.

Bahraini people have staged anti-regime demonstrations across the tiny Persian Gulf kingdom in support of distinguished Shia Muslim cleric Sheikh Issa Qassim, who recently had his citizenship removed by the Al Khalifah regime.