A Look at Iranian Newspaper Front Pages on September 11

Iranian newspapers on Sunday covered the construction of the second and third units of Bushehr nuclear power plant in southern Iran, which was started on Saturday based on a deal between Tehran and Moscow.

They also highlighted a recent truce announced by the US and Russia, which is going to be enforced as of Monday in the war-hit Syria.

The issue of Iran’s interaction with the Financial Action Task Force (FATF) has also remained a top story in Iranian media outlets.

4- Nuclear Chief: New Reactors in Bushehr Will Be Completed in 10 Years

5- Trump: If I Become the US President, Iranian Intruding Boats Will Be Shot

6- US and Russia Establish Joint Base to Attack ISIS 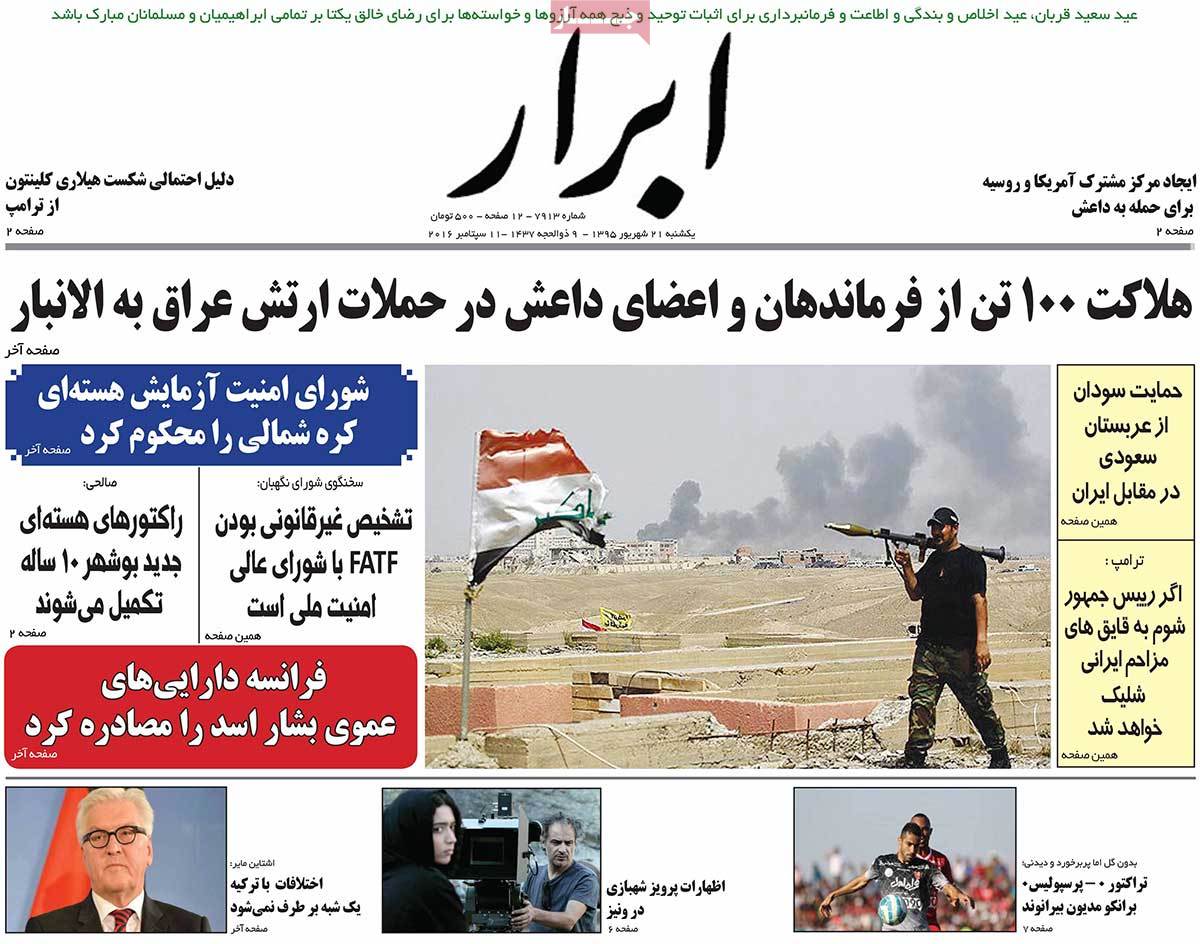 1- Cars with +2,500cc Engines Will Be Put in Auction in 15 Days: Government’s 4 Scenarios for Import of Luxury Cars

3- Free Trade Zones to Be Banned from Importing Consumer Goods 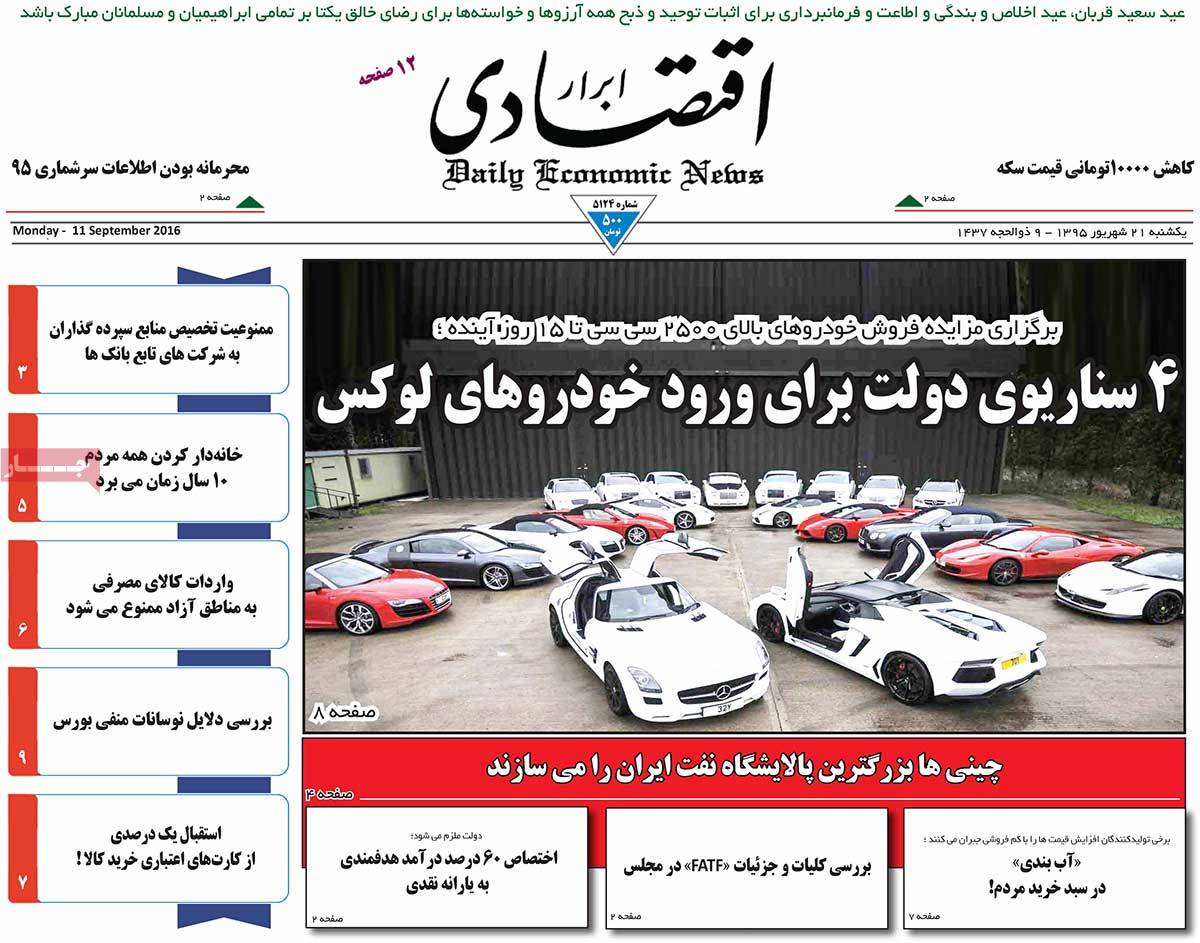 2- First VP: Construction of Second Nuclear Power Plant in Bushehr Is a Symbol of JCPOA 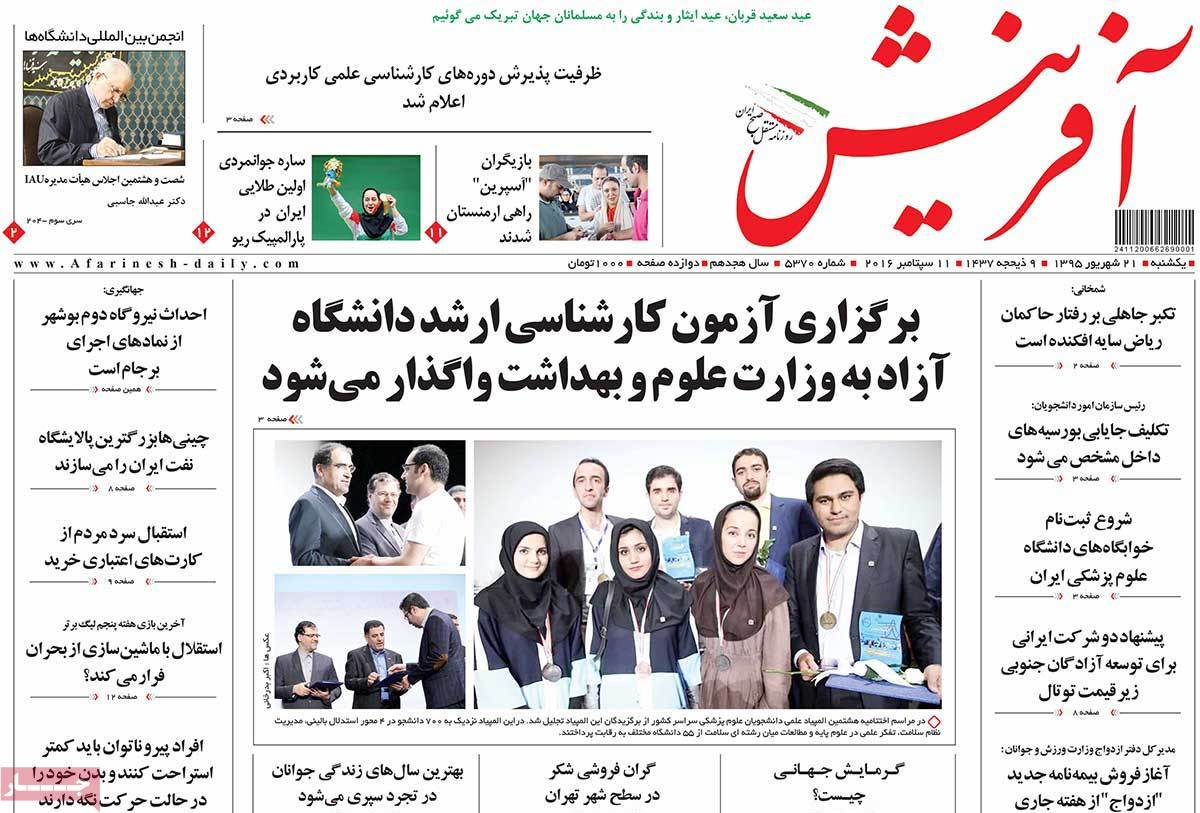 1- Trusting the Russians Once Again! [Construction of 2nd and 3rd units of Bushehr Nuclear Power Plant was started on Saturday based on a deal between Tehran and Moscow] 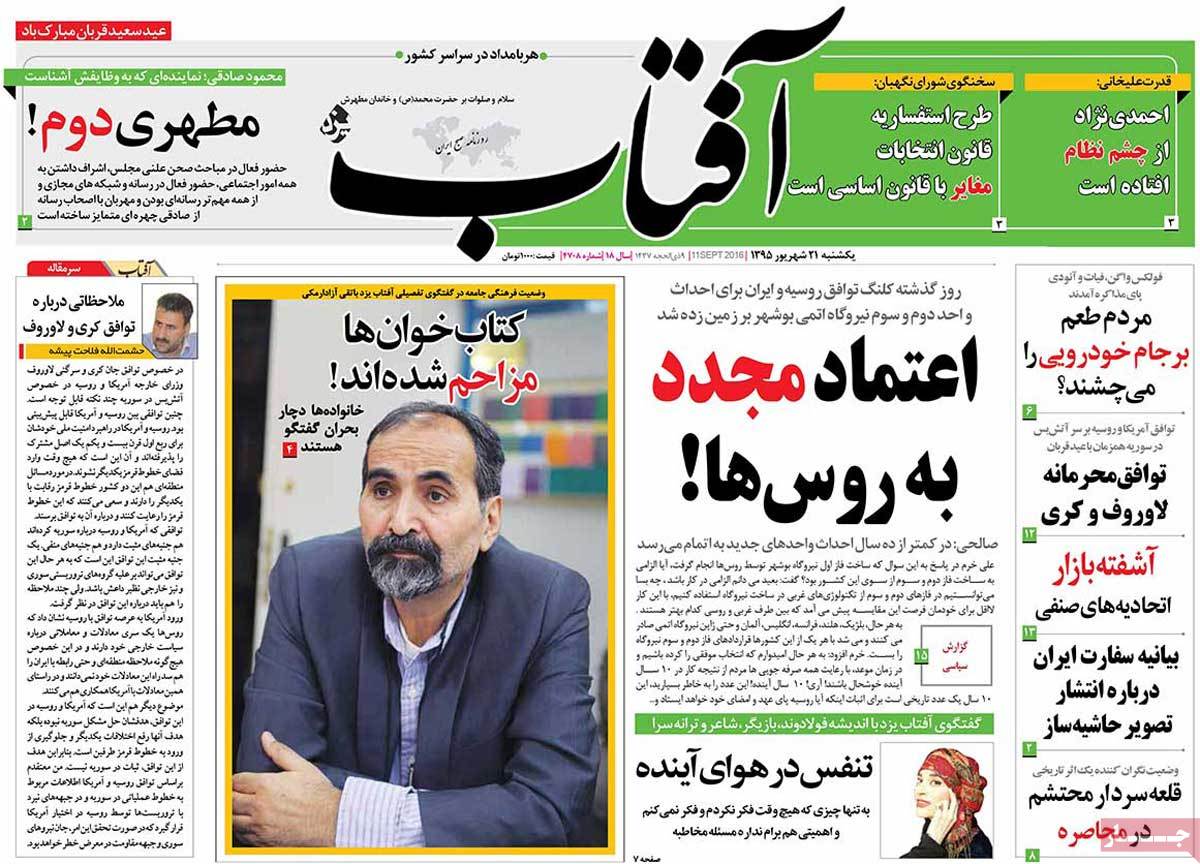 1- Reformist MP: Rouhani’s Main Supporters Have Been Left Aside 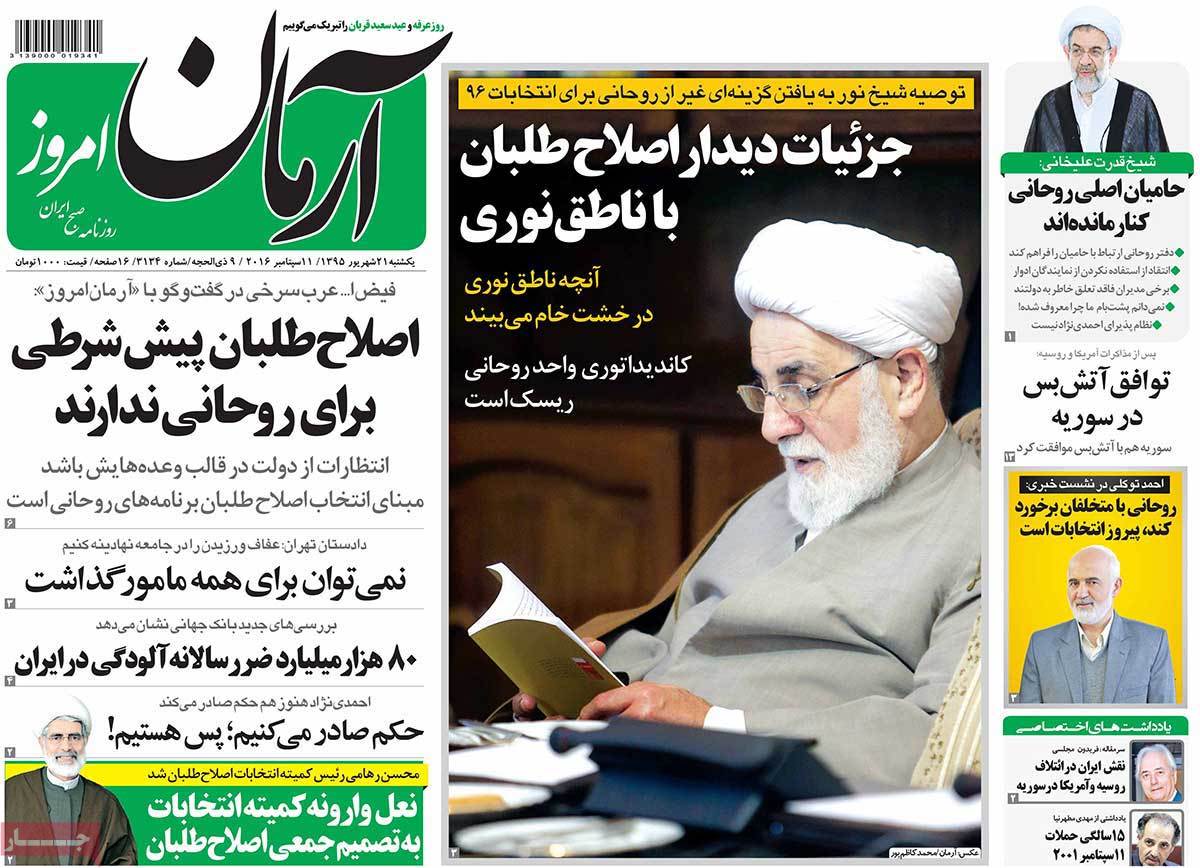 3- Reformist Cleric: We Won’t Choose Anyone but Rouhani under Any Circumstances 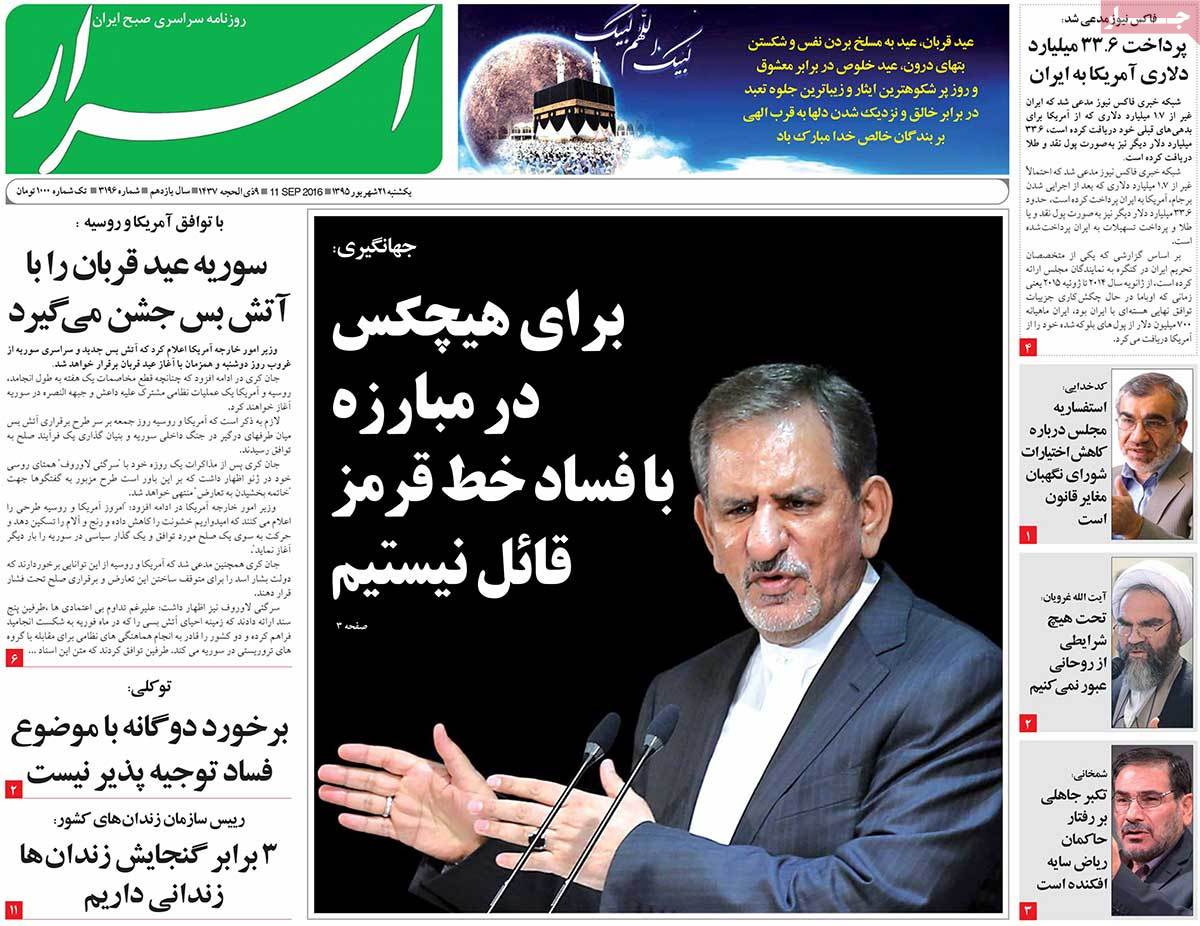 2- VP: Government Has No Red Line in Confronting Violations of Law 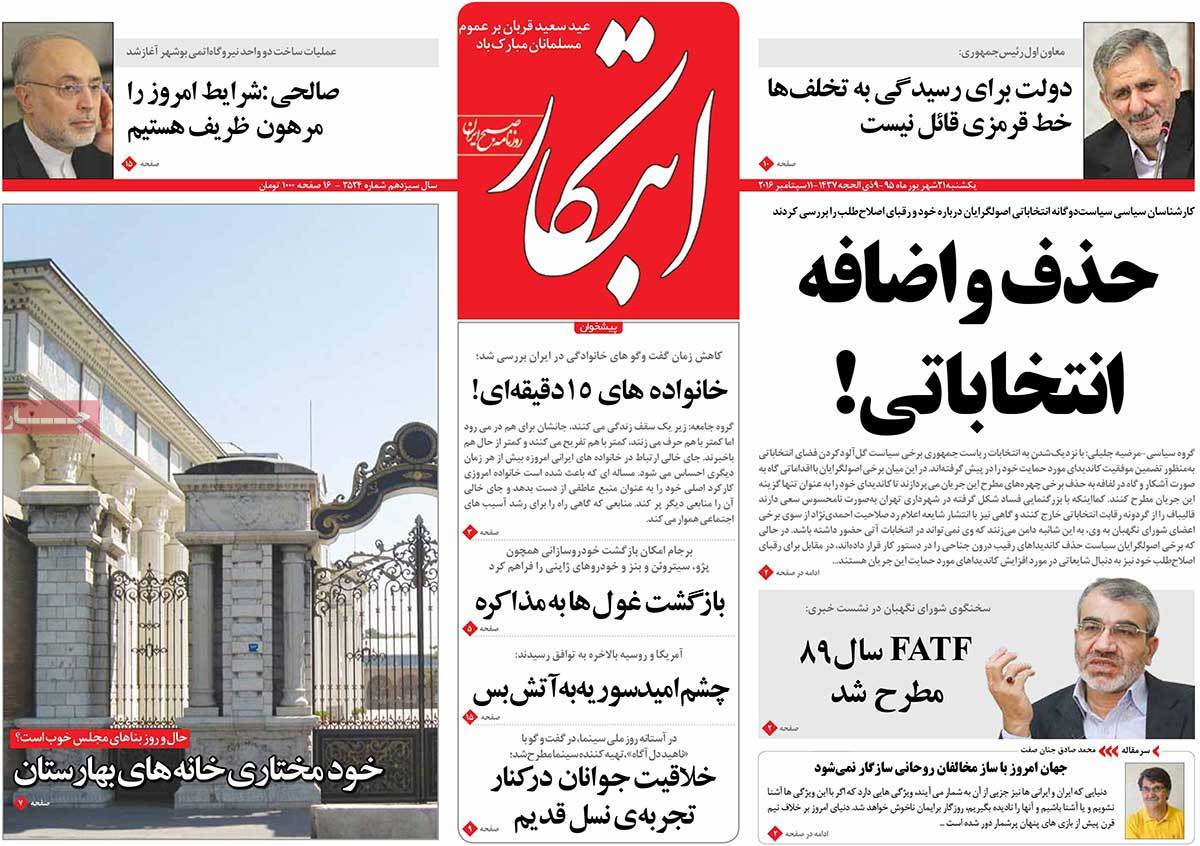 1- Beginning of New Ceasefire in Syria: Kerry and Lavrov Agree on a New Work Plan 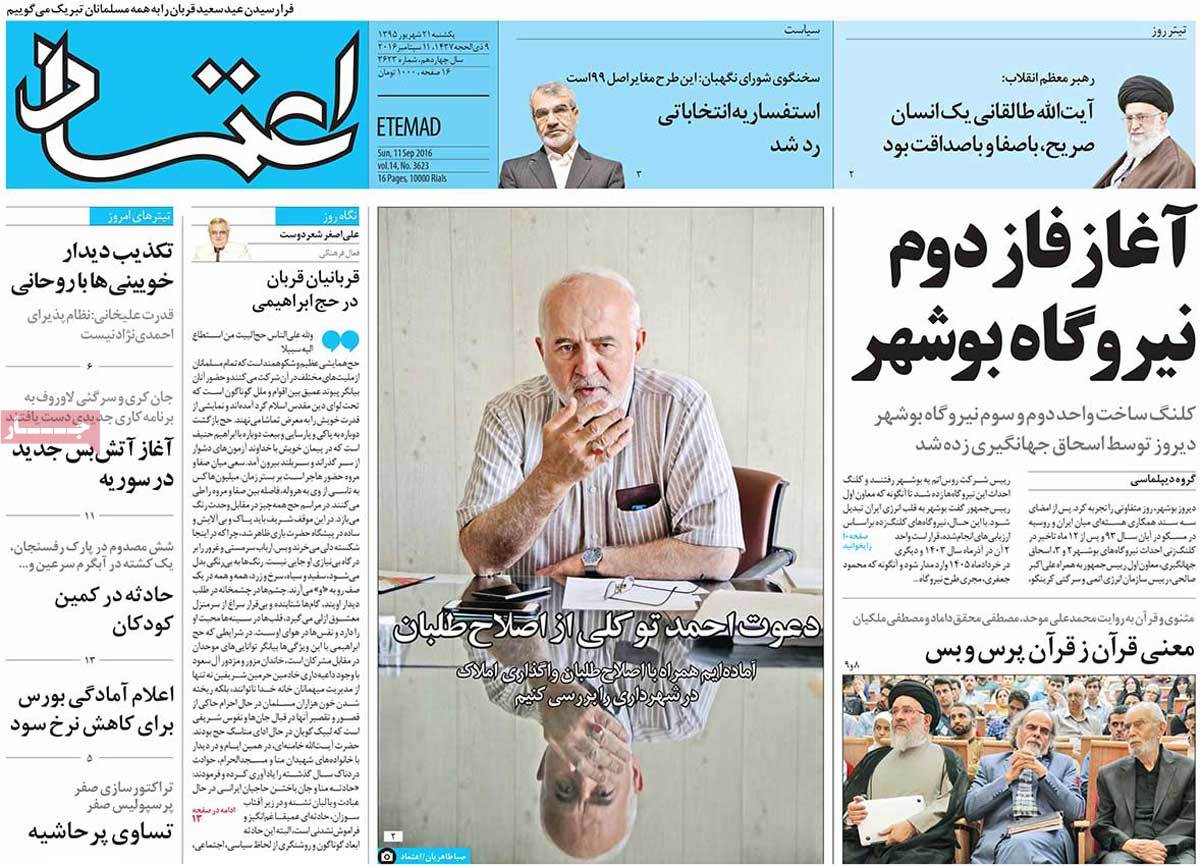 2- Prosecutor-General of Tehran: Smuggling of Goods Is Considered as Economic Corruption 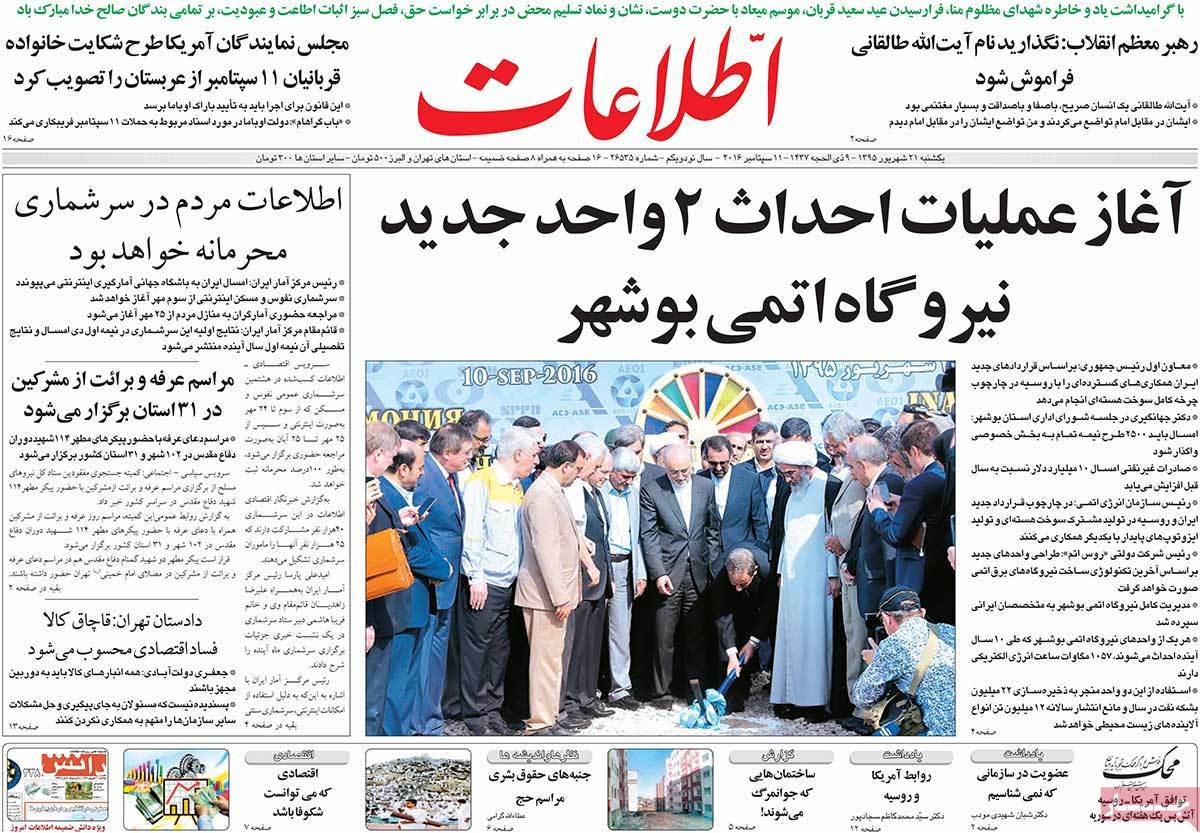 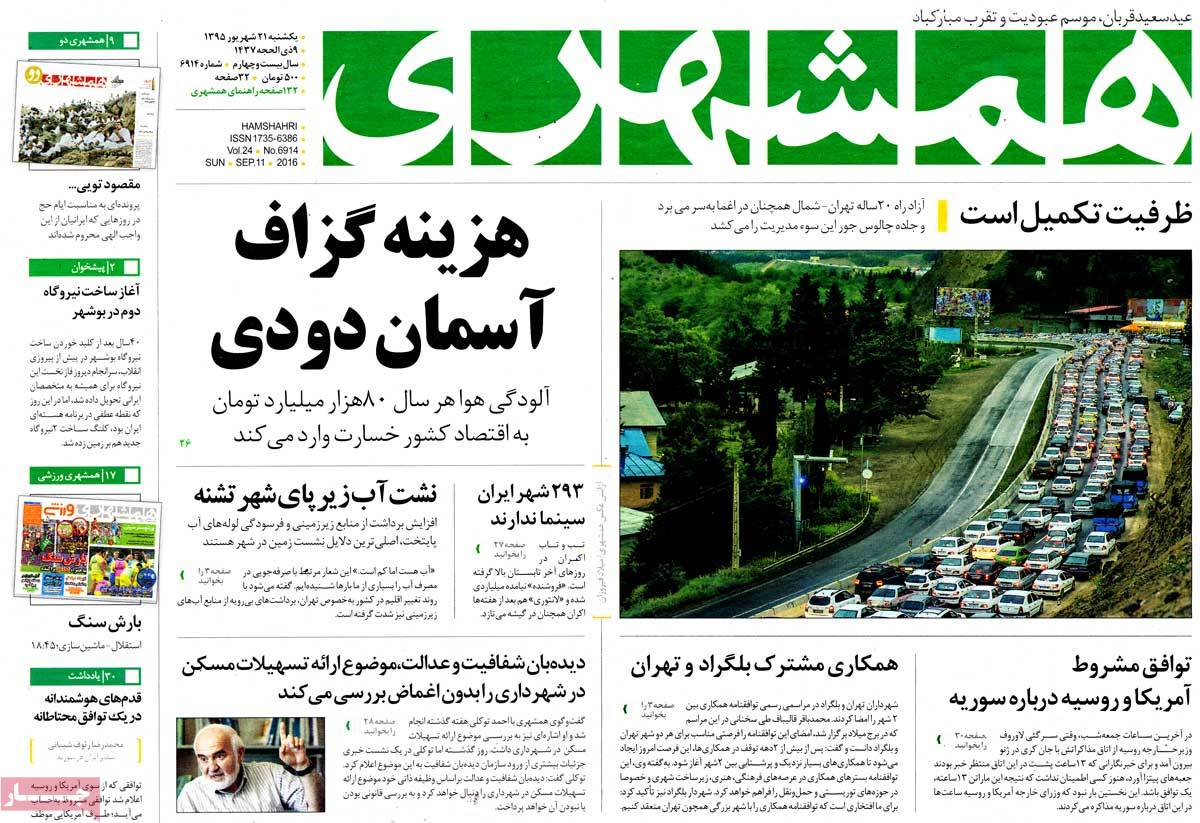 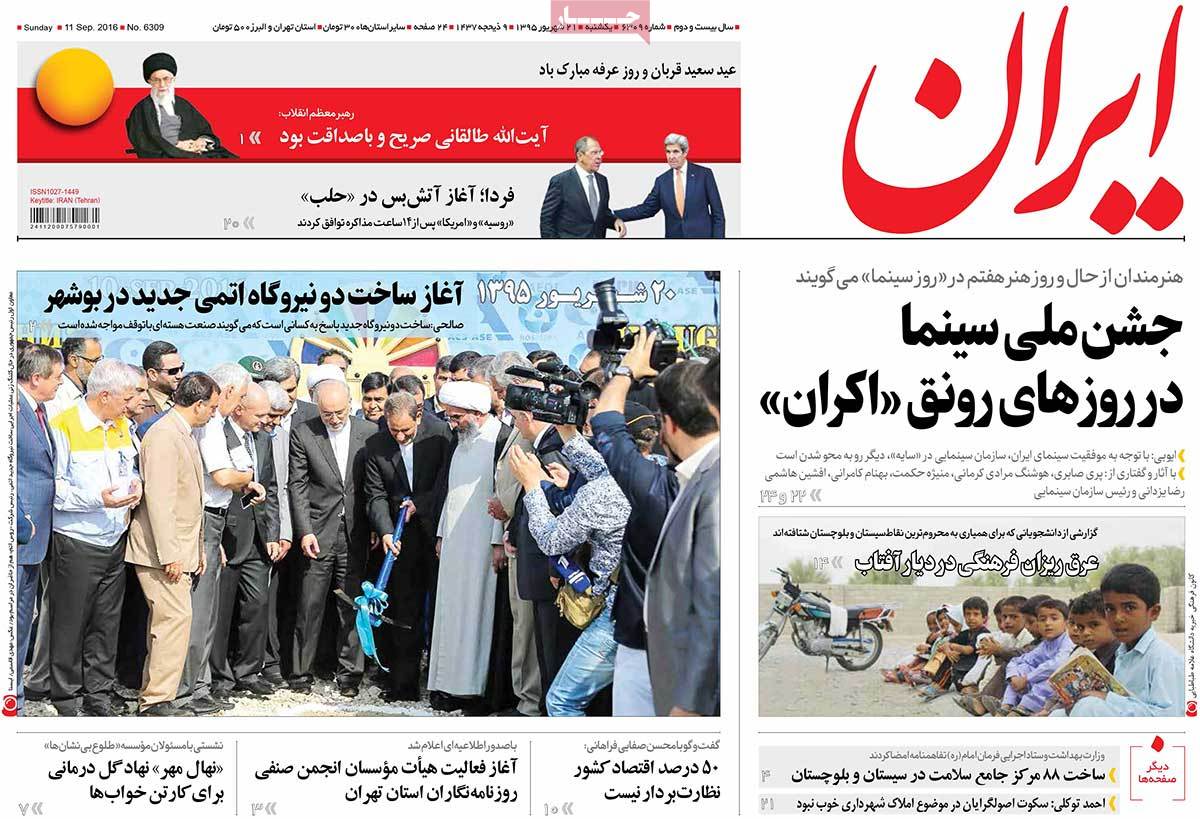 2- US Agrees to Fight Terrorists on Paper: Kerry-Lavrov Deal for Syria Truce 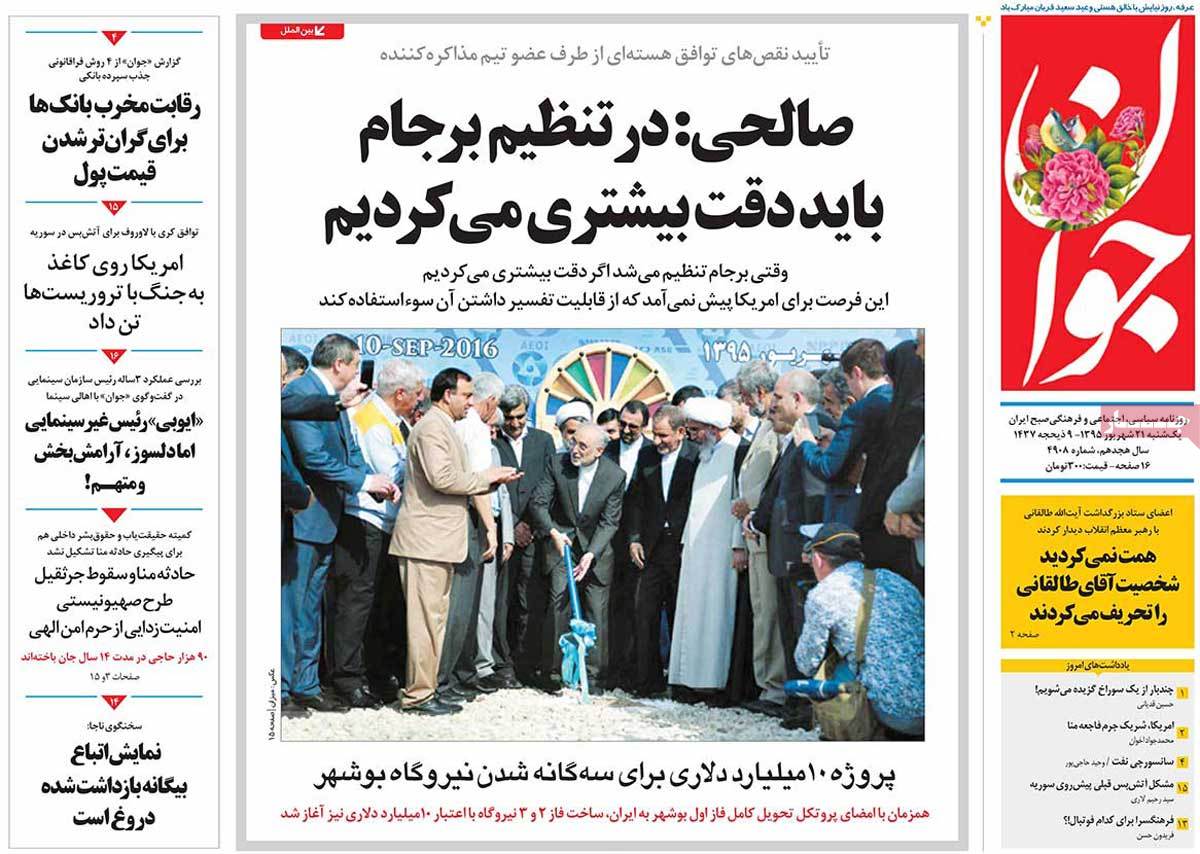 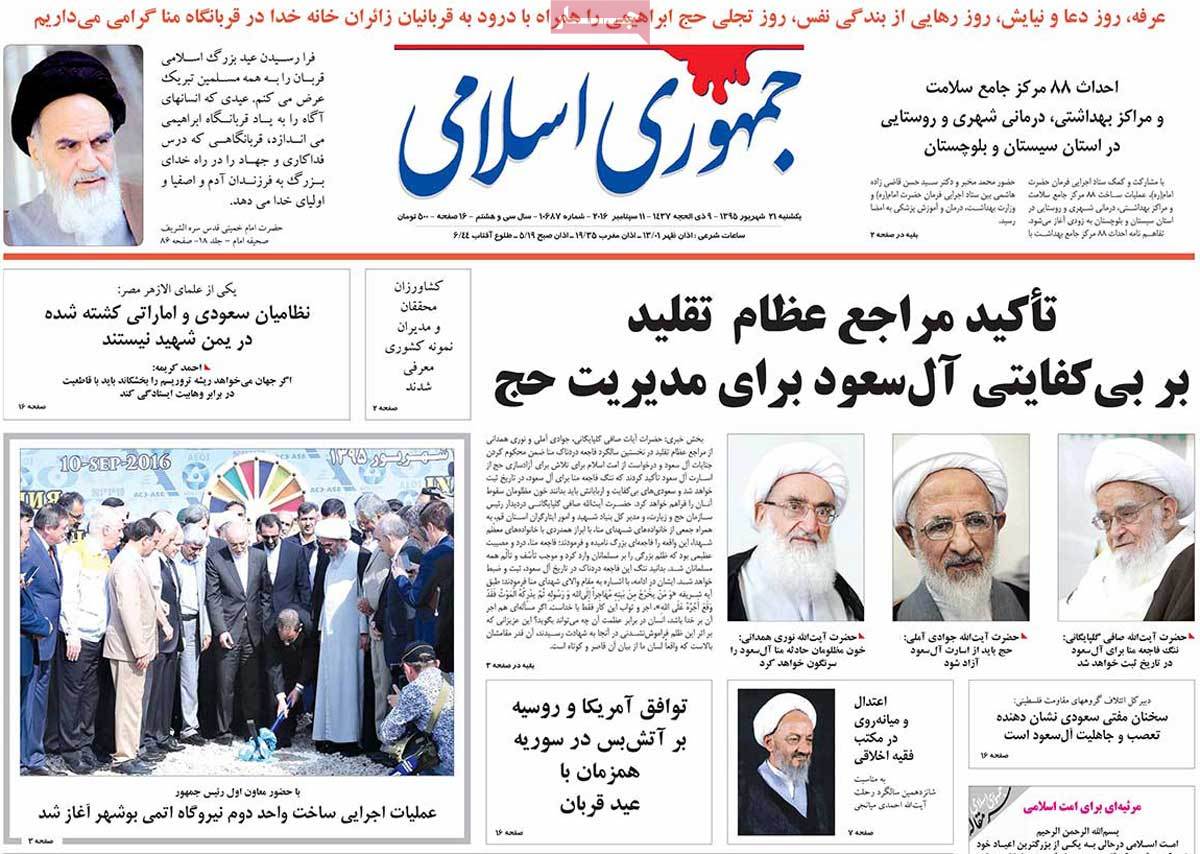 2- Cuba: We’ve Achieved ‘Almost Nothing’ from Our Ties with the US

3- Former World Bank Official to Kayhan: Clinton and Trump Are Both Soldiers of Israel 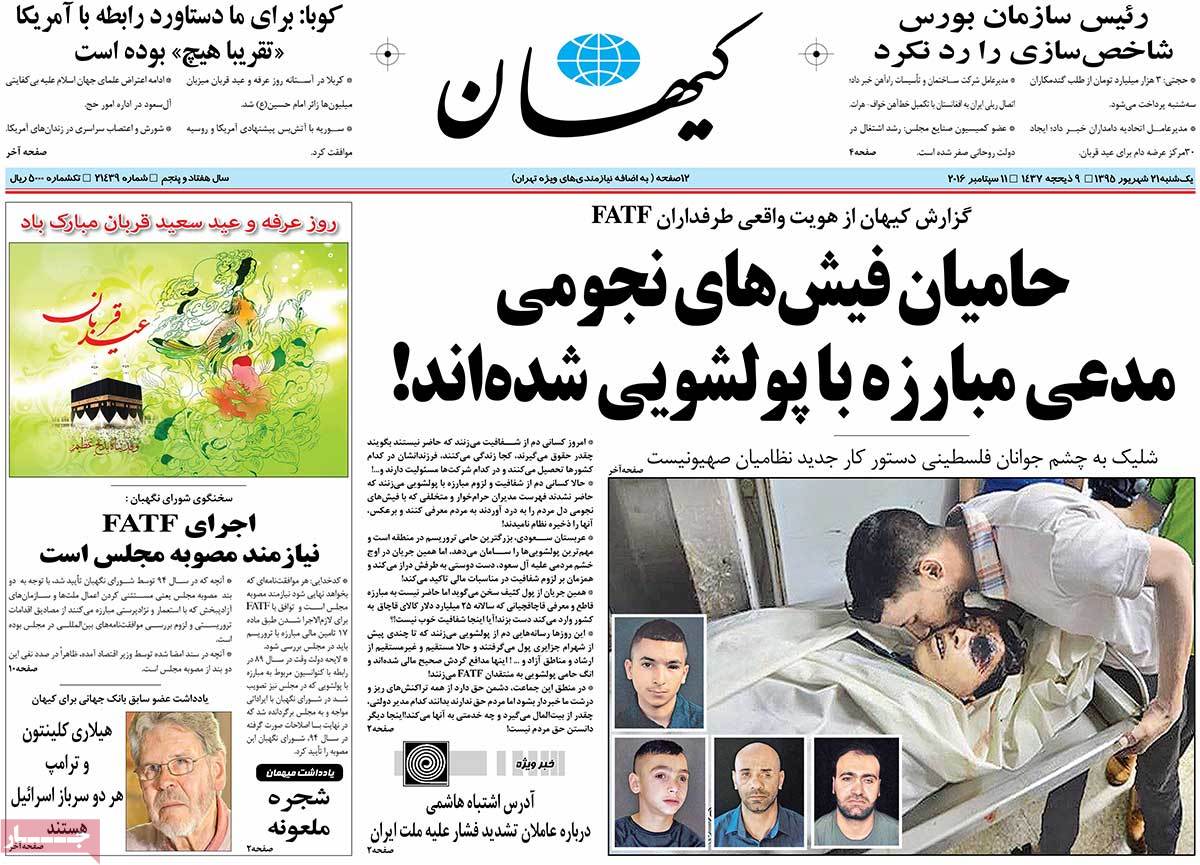 1- Killing the Time or True Ceasefire? US-Russia Deal ahead of Eid al-Adha

2- Iranian Banks Earn $3.3bn in Revenue out of Late Fees 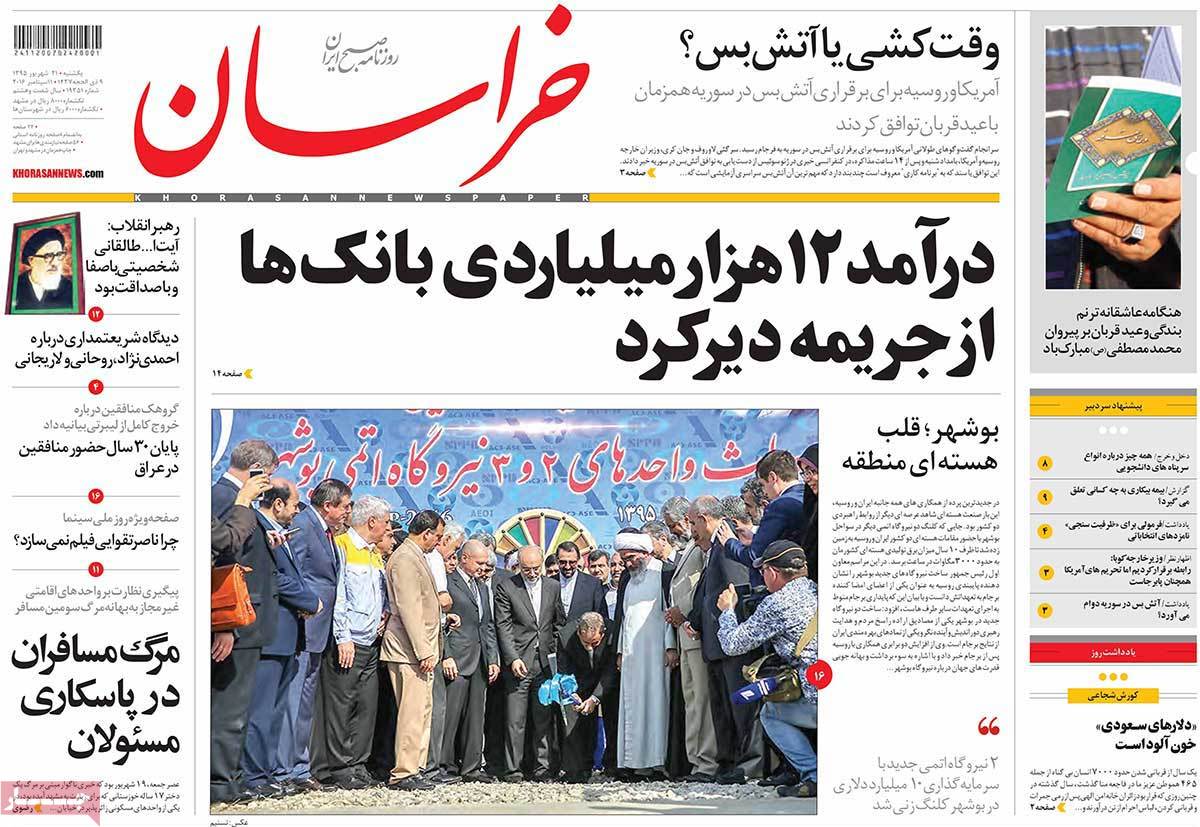 2- Sergei Krinko: We Have Two Celebrations; Final Delivery of Bushehr Nuclear Power Plant’s 1st Unit, and Beginning of Units 2 and 3

3- Senior Cleric: How Can We Have Good Neighbourliness with a Regime that Is Pioneer of Extremism and Sedition? 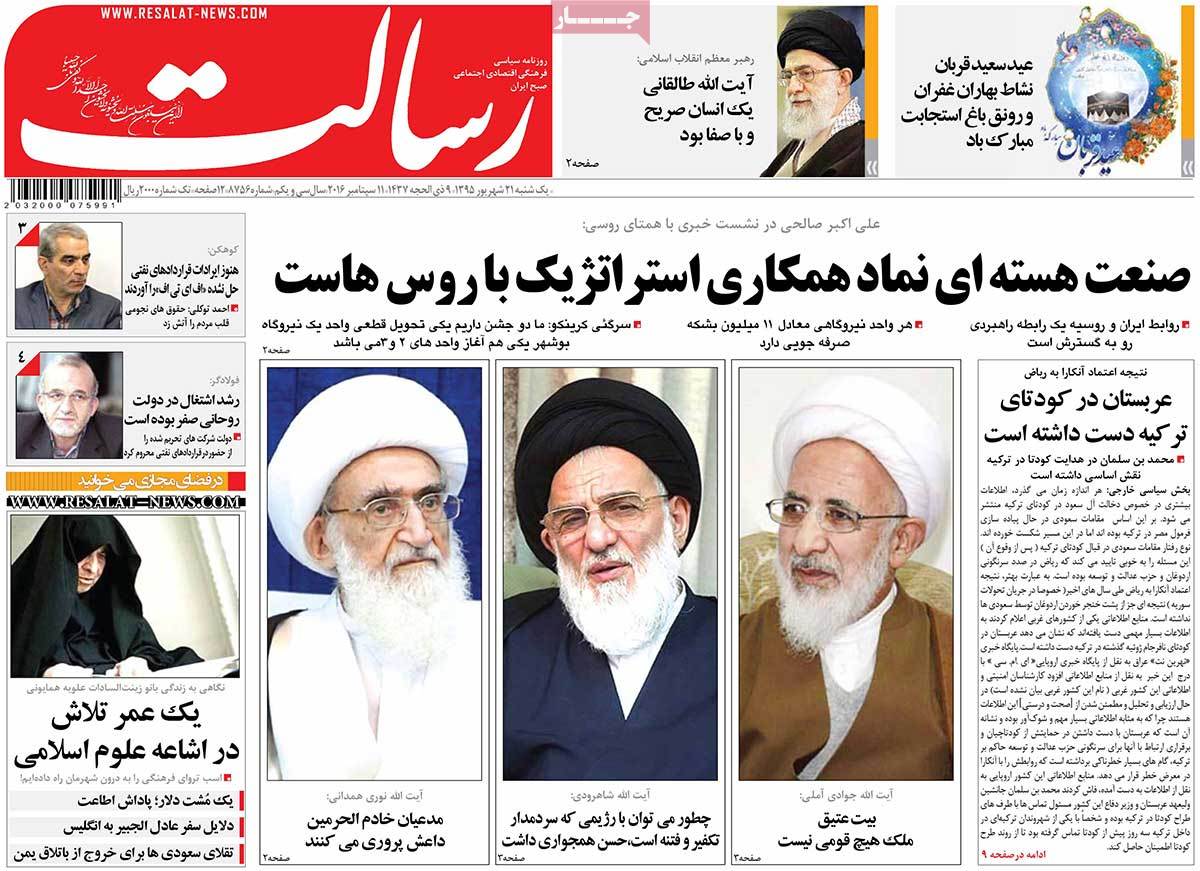 1- Editor-in-Chief of Kayhan: Ahmadinejad Was Also Looking for Ties with US

2- Iran’s Accession to FATF Has Been Approved by Guardian Council: Spokesman 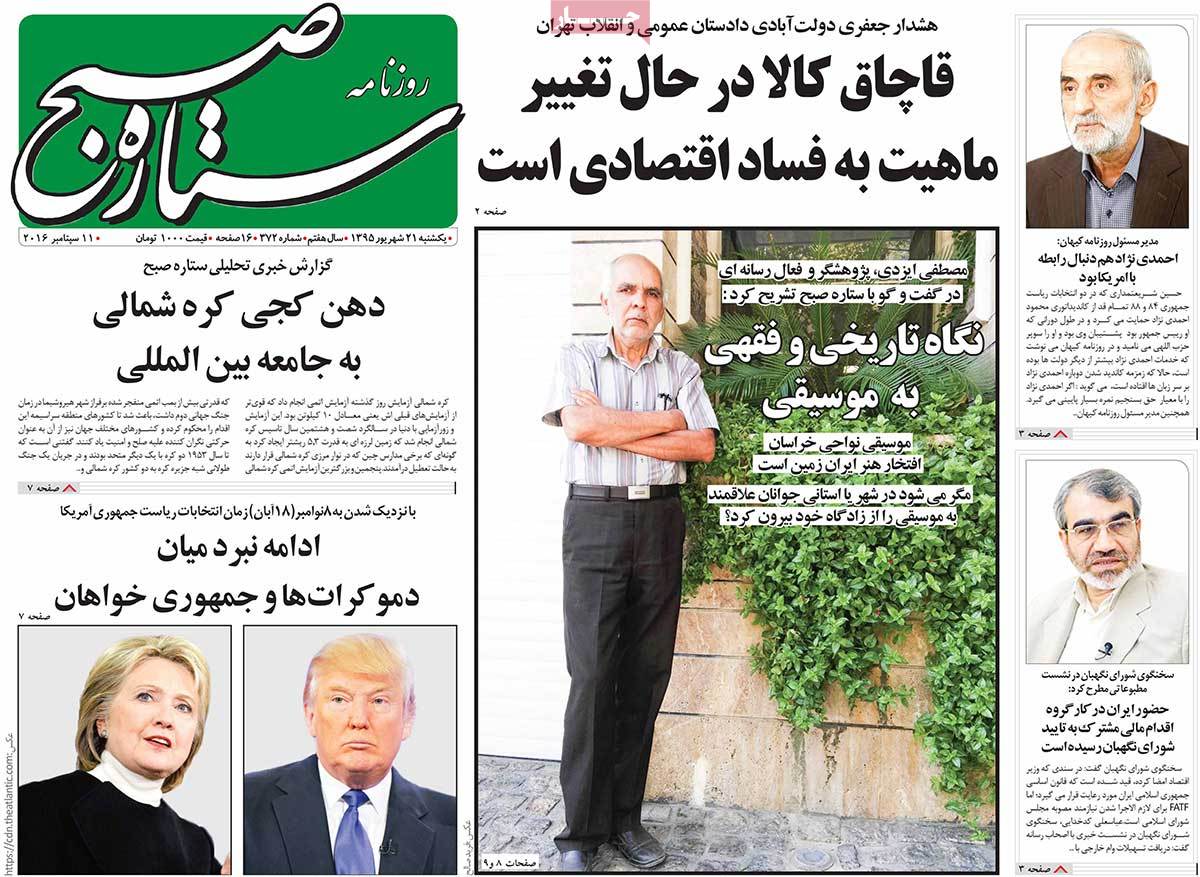 3- MP: Reformists Will Win Elections Even If Conservatives Build Coalitions 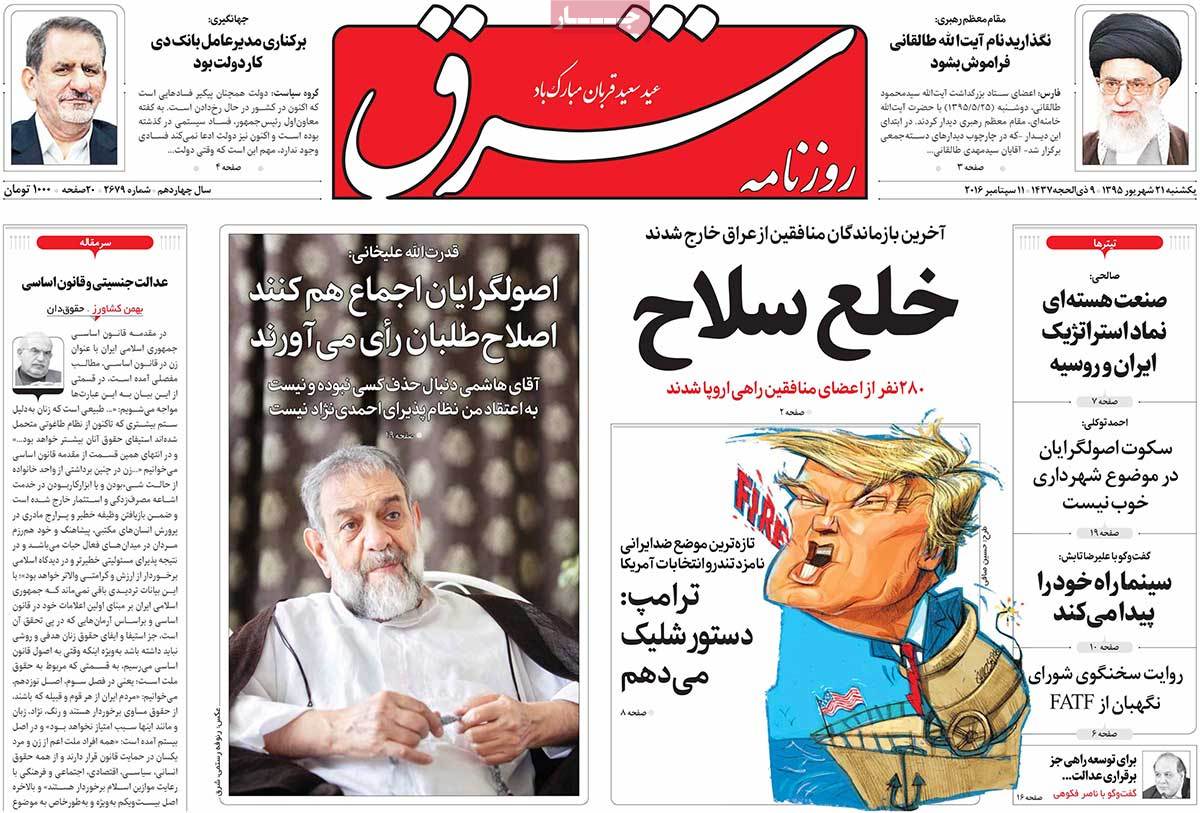 1- Diplomacy is Weak: Grand Ayatollahs Underline the Need for All-Out Follow-up of Mina Tragedy Case and Punishment of Al Saud

2- A Quick Overview of Life in Saudi Arabia: Biggest Violator of Human Rights 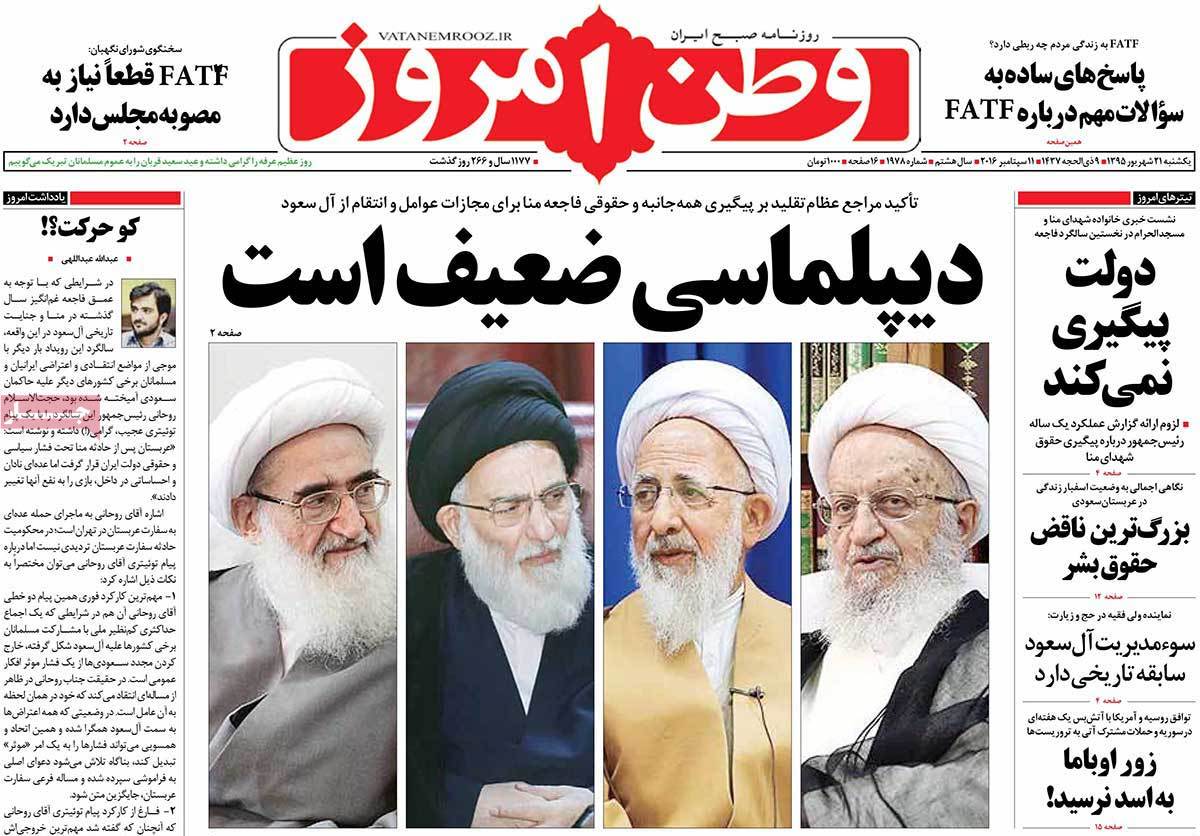