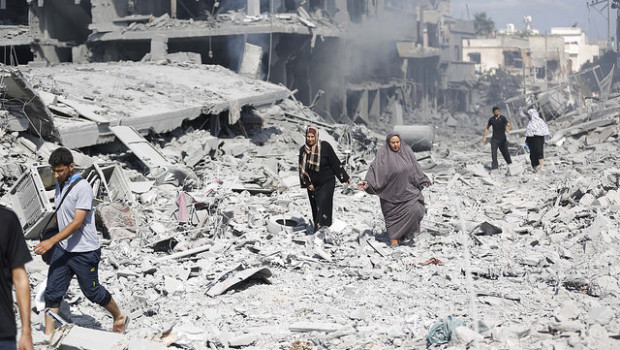 Alwaght- Studies show Israeli occupation has prevented Palestinians from their human rights and their economy from getting twice as large as it is now, a report by United Nation’s trade and development body (UNCTAD) revealed.

“The economy of the Occupied Palestinian Territory could easily produce twice the gross domestic product (GDP) it generates now, while unemployment and poverty could recede significantly, according to this year’s report on UNCTAD assistance to the Palestinian people,” the United Nations Conference on Trade and Development reported in a statement on 6 September.

UNCTAD’s fresh report listed 9 channels through which Israeli regime has deprived the economy of the Occupied Palestinian Territory from producing twice the gross domestic product (GDP) it generates now:

The confiscation of Palestinian land, water and other natural resources; loss of policy space; restrictions on the movement of people and goods; destruction of assets and the productive base; expansion of Israeli settlements; fragmentation of domestic markets; separation from international markets and forced dependence on the Israeli economy; continuous process of de-agriculturalization and de-industrialization that has deformed the structure of the Palestinian economy.

According to the latest estimations by the Palestinian Central Bureau of Statistics nearly 27 percent of people of the autonomy are currently without job. Meanwhile UNCTAD has revealed that over 66 percent of the Palestinians were food-insecure last year.

The continuous process of de-agriculturalization and de-industrialization” has contributed to a severe degradation of Palestinian economy, according to the UN report. The paper states that in Gaza “producers are denied access to half of the cultivable area and 85 per cent of fishery resources.”

The West Bank area is facing a similar problem, according to the UN. In the so-called area C, which constitutes over 60 percent of West Bank “more than 66 per cent of its grazing land, is not accessible to Palestinian producers”.

The figures published in the report say that the Israeli occupation of the Area C “costs the Palestinian economy the equivalent of 35 per cent of GDP ($4.4 billion in 2015).”

According to the report, Gazan producers are denied access to half of the cultivable area and 85 per cent of fishery resources.

The UN body’s study also shows that the cost of the direct damage inflicted by three Israeli regime aggressions on the besieged costal area, between 2008 and 2014, is estimated to be at least three times the size of Gaza’s annual GDP.

Touching on Israelis atrocities against hapless Palestinians, the report explains that “In January 2015 alone, 5,600 productive trees were vandalized, adding to the more than 2.5 million productive trees (including 800,000 olive trees) that have been uprooted since 1967.”

The Study, moreover, shows how Palestinian are deprived of access to safe water, as it explains ” Palestinians are prohibited from maintaining or digging water wells, while Israel has been extracting much more water than the level stipulated by the 1993 Oslo Accords and confiscating 82 per cent of Palestinian groundwater. The Palestinians are left with no choice but to import their own water from Israel to cover 50 per cent of their consumption.”

Slow reconstruction after Israeli regime’s 51-day war on Gaza in 2014 has compounded the adverse trade and development impact of Israel’s prolonged occupation of the Palestinian territory.

There are now 142 settlements in the West Bank, bringing the number of Israeli settlers to over one fifth of the Palestinian population. This expansion undermines the prospects for a two-State solution, the report says.

The UN body also earned that the Occupied Palestinian Territory has been “a captive market for Israeli exports as a result of the restrictions on Palestinian trade and productive activities,” that has made trade with Israeli regime account “for 54 per cent of the Palestinian trade deficit.”

The report argues that the occupation has cultivated permanent crises of unemployment, poverty and food insecurity. In 2015, 25 per cent of the people in the Occupied Palestinian Territory were unemployed and 66 per cent were food-insecure. In Gaza, unemployment reached 38 per cent in 2015; 73 per cent of the population is in need of humanitarian assistance.

“Israel has tightened its blockade on Gaza during the past year and added more items to the banned list of “dual-use” items – a list of civilian goods that Palestinians are not allowed to import because Israel deems them as having potentially harmful uses. The list includes raw materials, agricultural fertilizers, telecommunications equipment, steel, pipes, spare parts and other capital goods. Wood more than one centimetre thick is now classified as being of dual use. The blockade had devastated Gaza’s once-vibrant furniture industry; it also restricts the movement of people, including those in need of essential medical treatment,” report adds.

The blockade and attacks on the Gaza Power Plant in 2014 have further deepened Gaza’s electricity crisis, exacting a heavy toll on every aspect of public and private life. The report highlights some of the consequences of this crisis:

Shedding more lights on other aspects plight inflicted on Palestine bi Israeli occupation, report revealed that “For the first time in 50 years, the infant mortality rate in Gaza escalated from 12 to 20.3 per 1,000 live births between 2008 and 2013. This trend is unprecedented and rarely observed outside communities affected by HIV epidemics.”