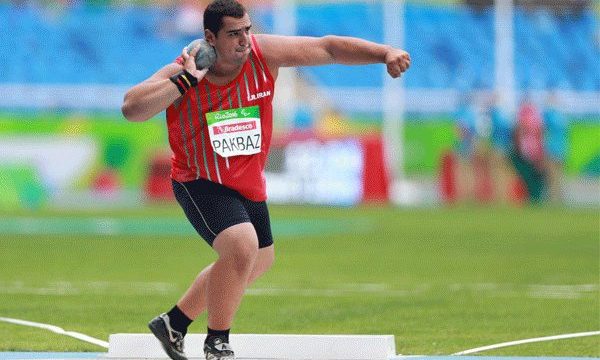 His medal is the first for Iran’s athletic delegation to the 2016 Paralympic Games in Brazilian city of Rio de Janeiro. To commemorate the loss of around 500 Iranian pilgrims in last year’s tragedy of Mina the Iranian squad is called the Mina delegation.

The Iranian sportsman who had earned his ticket to the 2016 Summer Paralympics on October 24, 2015, hurled the shot out to 14.15m for his first throw while his second throw was not accepted. The Iranian shot putter’s fourth throw was not accepted after his third-round effort of 14.94 meters. 15.28m and 15.98m were the fifth and sixth throws of Pakbaz at the João Havelange Olympic Stadium (also known as Nilton Santos Stadium) of Rio de Janeiro.

The Mina delegation of Iranian Paralympians at the Rio Paralympics is comprised of 111 sportspeople who vie at 12 fields of the 23 athletics.