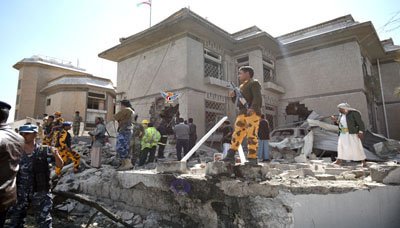 A complicated war is going on in Yemen. The point, which should be taken into account is that especially since 2011, the United States and Saudi Arabia have shared common views on some of their regional policies while having more differences on certain issues. For example, they shared less common views on how to deal with the Egyptian revolution in 2011, had great differences in the case of Bahrain, and their views about the crisis in Syria were poles apart and those differences still exist. The United States, however, had put Saudi Arabia totally in charge of the Yemen case since the beginning of Arab revolutions in 2011 and fully supported Riyadh while Russia was also not specifically opposed to this situation.

The most important point is that the people of Yemen do not need to be supplied with weapons and the likes of them. Therefore, in a show of goodwill and relying on the trust that Yemeni people and parties put in Iran, the Islamic Republic offered its four-point plan for resolution of the crisis in Yemen. In an article written for the New York Times in April 2015, Iran’s Foreign Minister Mohammad Javad Zarif noted that from Iran’s viewpoint the solution to the crisis in Yemen was more at hand than other regional crises, especially the crisis in Syria. He suggested that the Yemeni crisis could be seriously addressed within framework of Iran’s plan or any other just plan. Perhaps, one reason for this issue is that the two sides to Yemen’s crisis have entered the war unwillingly. On the one hand, the Ansarullah movement never aimed to consolidate its grip on the entire Yemen and just wanted to have a fair share in future and political structure of Yemen. On the other hand, it seems that Saudi Arabia’s decision to enter into war with Yemen, despite past experience of Saudi Arabia’s failed military interventions, was the result of the excitement after the death of its former King Abdullah in January 2015, and also a result of domestic rivalries and the power struggle in the country.

Due to these reasons, it is believed that Iran’s four-point plan can be still pursued despite all developments that have taken place thus far. Just in the same way that Iran’s four-point plan for Syria turned into a basis for the country’s political process through the adoption of the United Nations Resolution 2254, the same step can be taken in Yemen. It still seems that complexities surrounding the crisis in Yemen are less than those of the Syria crisis. The point, which must be taken into account, is that the more Saudi government dawdles and puts back the political process in Yemen, existing issues would become more complicated and chances for achieving a political agreement would decrease. In other words, the more innocent blood is spilt in Yemen, various parties involved in the country’s crisis would be less willing for Saudi Arabia and its allies to take part in defining a peaceful and political solution to the crisis. This is true because war always makes the situation more complicated and never helps achievement of an agreement or political solution. At any rate, there is hope that through developments that have taken place in the Yemeni crisis over recent weeks, including reopening of the country’s parliament and establishment of the Supreme Political Council of Yemen, and also due to the more active role that Russia has assumed with regard to Yemen’s crisis, achievement of a fair and mutually satisfactory solution would be possible in the near future.