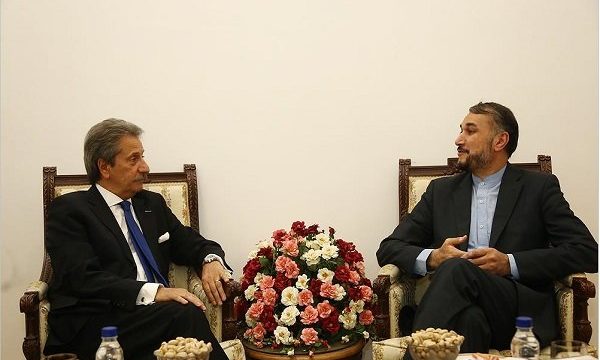 Iranian Parliament’s General Director for International Affairs Hossein Amir-Abdollahian made the remarks at a meeting with Mario Damas Nunes, the ambassador of Portugal to Tehran, who has ended his mission in Iran.

The two sides discussed prospects of bilateral cooperation between Iran and Portugal while exchanging views on regional developments.

Iran’s Amir-Abdollahian emphasized the need for parliamentary ties between the two countries and voiced Iran’s readiness to bolster ties with Portugal by launching regular diplomatic dialogues over issues of common interest.

He further noted that the Iranian Parliament plans to form parliamentary friendship groups in near future and suggested creation of a similar group in the Portuguese Parliament.

The official also pointed out the importance of political ties between the two sides and, while describing certain regional developments, appreciated Portugal’s realistic and firm stance towards ongoing crises in Syria as well as the fight against terrorism; “the Islamic Republic of Iran has always stressed that the Syrian issue needs to be resolved through political approaches and by the will of the Syrian nation.”

Mario Damas Nunes of Portugal, for his part, welcomed escalation of political ties between the two sides and voiced his country’s determination to develop multilateral ties with Iran; “Portugal seeks to strengthen relations with Iran in all areas and looks forward to expediting implementation of agreements between the two countries.”

He referred to Iran’s role in resolving the Syrian issue calling for an uplift in mutual consultations; “we hope that parliamentary ties between Tehran and Lisbon will be deepened in the new era.”

The Portuguese official also welcomed exchange of parliamentary delegations within foreign policy commissions and friendship groups as well as meeting of intermission meetings of the two sides’ parliament speakers.