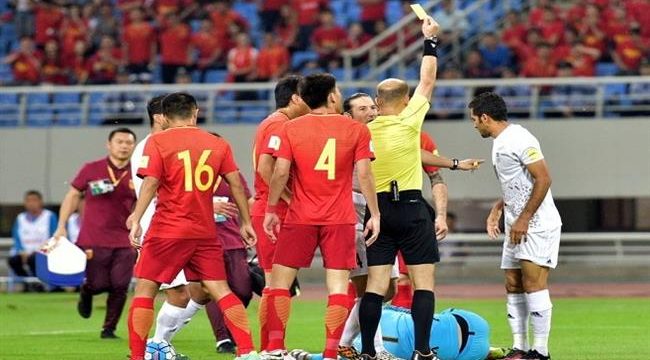 Iran’s national football team, known domestically as Team Melli, has played out a goalless draw against China in its second encounter at the third round of the 2018 FIFA World Cup qualification tournament.

On Tuesday evening, the Iranian outfit looked the better of the two in the first few minutes of the Group A match played at the Shenyang Olympic Sports Center Stadium in the northeastern Chinese city of Shenyang.

Only one minute into the game, captain Andranik Teymourian sailed the ball into the middle of China’s penalty area, where waiting forward Sardar Azmoun was geared up to blast and net the opener. The ball failed to reach the 21-year-old FC Rostov striker, and went out.

Chinese footballers were awarded a corner three minutes. Iran’s goalkeeper Alireza Beiranvand, though, made a great save and killed off the hosts’ scoring hopes.

Iranian midfielder Masoud Shojaei did not hesitate then to mountain a counter-attack, and sent a long pass to teammate Vahid Amiri. China’s rushed out of his net to collect, and it was when Amiri rammed into him, prompting the Jordanian referee Adham Makhadmeh to show the Iranian midfielder a yellow card.

Teal Melli grasped its first golden scoring opportunity in the 18th minute, when Ramin Rezaeian sent the ball into the right-hand side of China’s goalpost. But, Azmoun squandered the chance and shot the ball out of the pitch.

Iranian Masoud Shojaei set up another scoring chance for Azmoun in the 24th minute, but his efforts went down the drain as the latter fell short to place the ball into the opposite side’s net.

Iran had further scoring chances later on, but could not find the back of the net.

After the breather, Iranian footballers took up their second favorable opportunity to tack a goal in the 50th minute, when Amiri stripped the ball off a Chinese football and quickly passed to Shojaei, who was hanging about in the penalty area. Shojaei then dribbled two Chinese footballer and rolled the ball to Alireza Jahanbakhsh. Jahanbakhsh, however, shot the ball wide off the target.

In the 53rd minute, Chinese sportsmen tried to score a goal but Iranian defenders sprang into action and kicked the ball out into corner to crush the hosts’ dream.

Both teams then went through ups and downs in their attempts to score a goal but all to no avail.

Iran is pitted against South Korea, Uzbekistan, China, Qatar and Syria in the Group A of the third round of the 2018 FIFA World Cup qualification tournament.