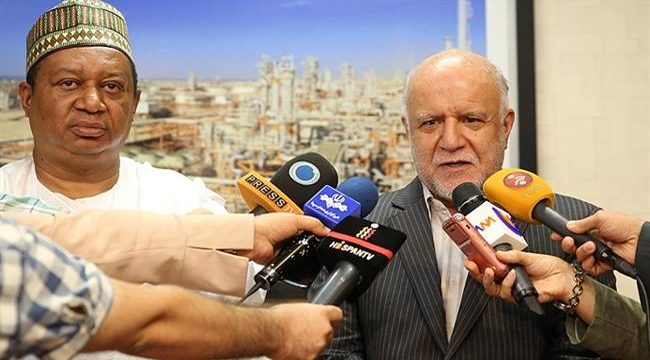 TEHRAN, Sep 06 (Shana) –Iranian Minister of Petroleum Bijan Zangeneh said Iran would support any decision by crude oil producers that would bring stability back to the oil market.

Speaking after a meeting with OPEC Secretary General Mohammed Barkindo here in his Tehran office on Tuesday, Zangeneh told reporters that the price of crude oil at 50 to 60 dollars per barrel is what most members of the Organization of Petroleum Exporting Countries (OPEC) are interested in.

He said the price of oil at $55/b would be suitable, saying, “This price makes production of oil by OPEC members profitable, economical and useful, while preventing the rivals from raising their output.”

This is the first visit to Iran by Barkindo in his new post as OPEC secretary general.

“We keep supporting him [Barkindo] in his new post,” Zangeneh further said.

The Iranian official said Iran’s stance regarding the upcoming meeting of OPEC member and non-member producers of crude oil due to be held in Algeria mid-September, was related to the OPEC chief who in return recounted on his talks with other countries.
Barkindo arrived in Tehran Monday night.