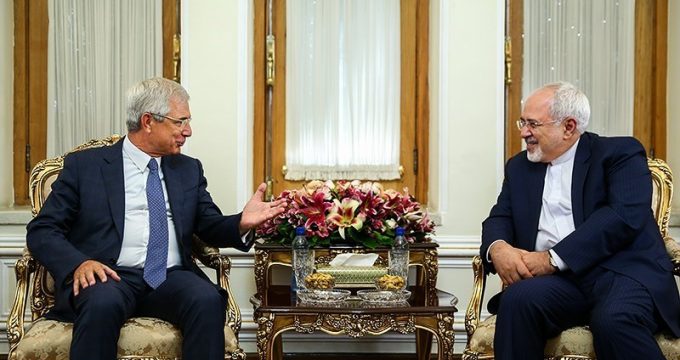 “We are ready to hold more consultations with Europeans, particularly France, about the crisis in Syria,” Zarif said in a meeting with President of French National Assembly Claude Bartolone in Tehran on Tuesday.

He strongly rejected the dichotomization of terrorism into good and bad forms anywhere in the world, saying, “Today, the threat of terrorism is a global threat … and we believe in [the need for] the international community’s more serious cooperation to remove this common threat.”

The top Iranian diplomat further said Tehran regards Paris as an “important partner in its economic relations” and added that the two sides have common views on many regional issues.

“The exchange of political and economic delegations between the two countries at high levels will lead to further expansion of cooperation and fostering of more mutual understanding,” Zarif added.

The top French parliamentarian said Paris attaches importance to the full implementation of the nuclear agreement, known as the Joint Comprehensive Plan of Action (JCPOA), between Iran and the P5+1 group of countries.

He added that the JCPOA opened up positive opportunities in Iran’s ties with other countries, saying that several European and French banks have started cooperation with Iran.

On January 16, Iran and the five permanent members of the United Nations Security Council – the United States, Britain, France, China and Russia – plus Germany started implementing the JCPOA, which they had clinched on July 14, 2015.

Under the nuclear agreement, Iran agreed to limit its nuclear program in return for the termination of all nuclear-related sanctions against the Islamic Republic.

Bartolone also stated that Tehran and Paris have common views on regional issues, particularly the situation in Lebanon, Iraq and Syria and emphasized that the Syria crisis must be settled only through political approaches.

“Any remarks suggesting a change in the political map and geographical borders of countries will intensify disputes and tensions,” Shamkhani said.

He added that the prolongation and spread of the Syria crisis would not be beneficial to the region and Europe, saying that France, as a country which has suffered from terrorism, must take more serious actions to stop the delivery of military, intelligence and financial aid to terrorists.

The SNSC secretary emphasized that Syrian people are in dire need of humanitarian aid in areas controlled by Daesh Takfiri terrorists and al-Qaeda militants.

“European countries’ refusal to take in refugees and harsh treatment of refugees are at odds with human rights standards and show a lack of responsibility vis-à-vis people plagued with the crisis of terrorism,” the senior Iranian official said.

No let-up in fight on terror: Bartolone

Bartolone, for his part, said France strongly believes in a relentless fight against terrorism and is monitoring and countering methods used by terrorist groups to attract and recruit teenagers.

The top French parliamentarian said some countries seek to use the issue of human rights as a means to create limitations for Iran and added that such issues can be resolved thorough dialogue.

Claude Bartolone, Mohammad Javad Zarif, Syria crisis September 6, 2016
Chances high that Russia will resume its use of Iranian military base
No meeting with Netanyahu for now: Palestine’s Abbas