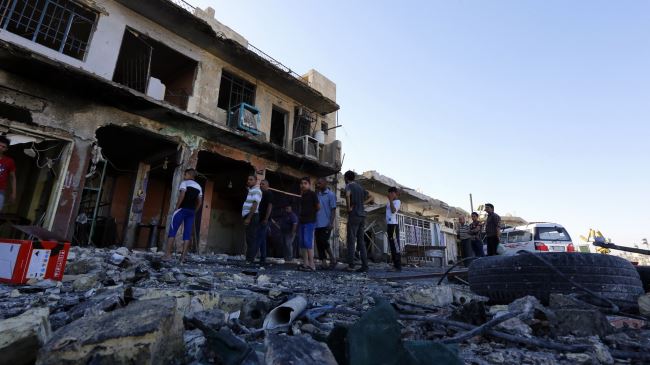 A Daesh car bomb attack has killed at least nine people and injured 20 more in the Iraqi capital Baghdad.

The late Monday blast went off near a hospital in the city’s Karradah district. According to reports the target of the attack was a Shia gathering in the neighborhood.

The Takfiri terrorists claimed responsibility for the attack via a statement posted by the Amaq news agency, an affiliate of the group.

Police and medical officials say that the death toll from the incident is expected to rise.

The latest bomb attack took place in an area not far from the July attacks, which claimed the lives of over 300 people.

The deadly blast took place when a vehicle packed with explosives was detonated in Karradah area while families were shopping for Eid al-Fitr which marks the end of the holy Muslim fasting month of Ramadan.

The United Nations Assistance Mission for Iraq says a total of 691 Iraqis were killed and another 1,016 wounded in acts of terrorism, violence and armed conflict in August.

The northern and western parts of Iraq have been plagued by gruesome violence ever since Daesh terrorists mounted an offensive there more than two years ago. The militants have been committing vicious crimes against all ethnic and religious communities in Iraq, including Shias, Sunnis, Kurds and Christians. The Iraqi army and volunteer fighters from the Popular Mobilization Units have been engaged in joint operations to retake militant-held regions.