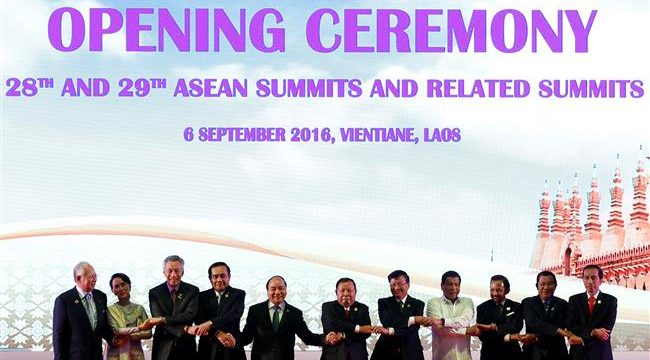 Leaders of the Association of Southeast Asian Nations (ASEAN) have kicked off a regional summit with different topics on their agenda, including the South China Sea dispute.

The 10 ASEAN leaders attended the opening ceremony on Tuesday in the Laos’ capital, Vientiane, with the host country’s President Bounnhang Vorachith delivering a speech at the event.

The bloc seeks to promote intergovernmental cooperation and facilitate economic integration amongst its member nations.

The summit is expected to be overshadowed by the issue of the South China Sea.

While China claims almost all of the South China Sea, most of the group’s 10 members, including Vietnam and Malaysia, have also been competing claims to the waters, which are believed to be rich in oil and gas.

The maritime dispute pushed the ASEAN into deadlock in July, when Cambodia foiled all attempts by other member countries to issue a joint statement against China.

Earlier in July, The Hague-based Permanent Court of Arbitration ruled that China’s claims to sovereignty over the disputed areas in the sea or its resources “had no legal basis,” in a case brought by the Philippines.

Beijing, however, rejected the verdict, arguing that the tribunal has no jurisdiction over the issue

According to a draft of the agenda of the ASEAN summit, obtained by the Associated Press on Monday, Southeast Asian leaders are likely to avoid any official statement about the ruling.

The draft pointed out eight issues related to the disputed sea; but there was no mention of the July ruling.

Analysts say the group’s decision to avoid mentioning the court ruling, would represent a diplomatic victory for China.