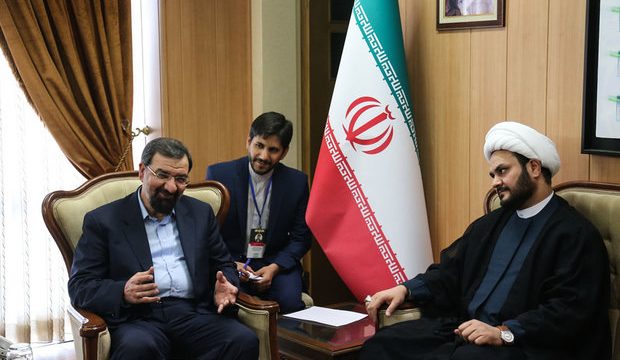 Speaking during a meeting with Maj. Gen. Mohsen Rezaei, Sheikh Akram al-Kaabi said Americans seek to establish a permanent military base in Mosul; “these plans can be disrupted only if Al-Hashd Al-Sha’abi takes part in Mosul Liberation operation.”

The visiting official pointed to the latest field developments in Syria stating “over the recent weeks, it was announced that terrorists have broken the siege in Aleppo, which happened only once though we immediately took control of it as the terrorists are under our fire again.”

Nujaba SG deemed some Arab countries in the region as the reason behind growth of terrorism; “al-Nujaba intelligence surveillance center has taken hold of some documents revealing a direct connection between Al-Nusrah Front and Qatar.”

Later in his remarks, the official touched upon Iraqi issues and Mosul operation underlining “not only do we want to enter Mosul, but also we plan to take control of its center.”

He outlined Al-Hashd Al-Sha’abi’s participation in Mosul operation as vital and added that Americans want to establish a permanent military base in Mosul, a plan which can be foiled with intervention on the part of Al-Hashd Al-Sha’abi.”

Sheikh Akram al-Kaabi went on to extend his gratitude to the Islamic Republic of Iran and on top of it the Leader for their generous aids; “Islamic Resistance forces are indebted to Iranian commanders for their experience and skill in battlefields specially in ‘street fighting’,” he concluded.