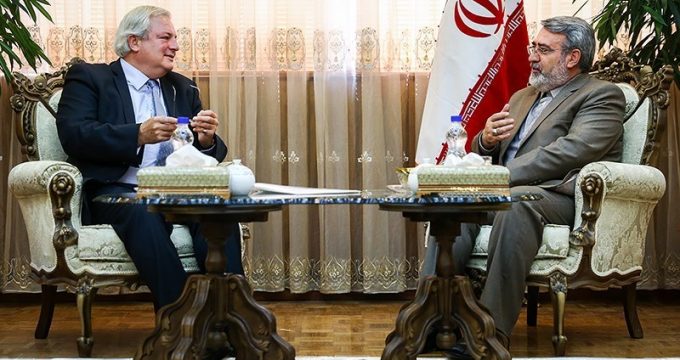 Iran urges UN to be active in dealing with humanitarian crises

TEHRAN – The Iranian interior minister has called on the United Nations to be more active in helping the people in need of humanitarian aid.

The call by Abdolreza Rahmani Fazli came after he met with UN Emergency Relief Coordinator Stephen O’Brien in Tehran on Sunday.

Now the Middle East is caught in its worst humanitarian crisis. Now millions of people in Syria and Yemen are suffering from lack of food, medical facilities, shelter, etc.

“These are major humanitarian crises that the United Nations should be actively involved in,” the interior minister remarked.

The minister also said he had told O’Brien that Iran, due to its geographical location, is prone to natural disasters such as earthquake and storm.  He said dust storms have been added to natural mishaps.

However, he added, Iran has good experiences in dealing with such mishaps.

The minister said Iran and the UN can exchange experiences in training, bilateral and multilateral cooperation in facing natural disasters and sending aid to people in need.

In talks with O’Brien it was agreed that Iran be more actively involved internationally and that Iran and the UN use each other’s capacities and experiences, Rahmani Fazli explained.

The interior minister also said he held discussions with the UN aid chief on the drug trafficking and the “relationship between drug trade and terrorism and evil acts”.

He went on to say that all UN bodies acknowledge that Iran has been hosting great number of people displaced by war and that Iran is a pioneer in the campaign against drug trafficking.

“We are obligated” to inform the international community about “all the steps taken by people and (state) bodies,” he remarked.

For his part, the UN aid chief praised Iran for hosting about three million Afghan refugees since the Soviet invasion of Afghanistan in 1979.