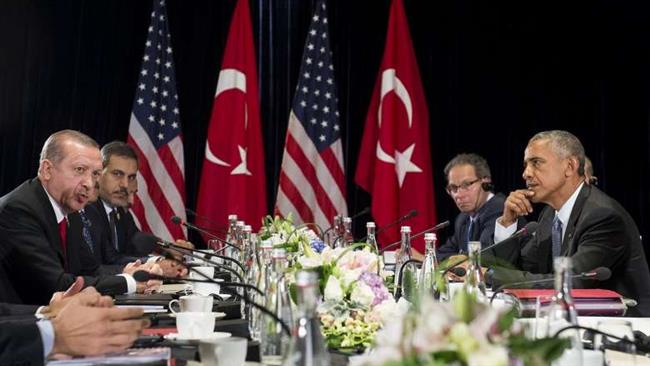 US President Barack Obama says his administration will help Turkey bring to justice those who attempted to overthrow the government of President Recep Tayyip Erdogan.

Obama made the remarks in a meeting with Erdogan on Sunday in Hangzhou, China, on the sidelines of the Group of 20 economic summit.

“We will make sure that those who carried out these activities are brought to justice,” Obama said.

Ankara has accused US-based cleric Fethullah Gulen of orchestrating the failed coup of July 15, and asked Washington to extradite him.

However, the US has so far refused to do so, saying it needs evidence of Gulen’s involvement in the coup organized by an army faction.

Over 40,000 people were detained in connection with the abortive coup, of whom 20,355 were formally arrested. A number of 79,900 people were removed from public duty in the military, police, civil service and judiciary.

On August 10, Erdogan said Washington must make a choice between Turkey and the so-called Fethullah Terror Organization (FETO). “Sooner or later, the United States will make a choice. Either Turkey or FETO. They will either choose the putschist terrorist FETO or Turkey, the democratic country. They need to make a choice.”

He said that Turkey had sent “eighty five boxes of files” to Washington to prove Gulen’s alleged role in the failed coup.

In his meeting with the Turkish president, Obama also talked about Turkey’s military operation in Syria, saying that it was important to “finish the job” of securing the country’s border with Syria.

Turkey has been striking Kurdish positions in northern Syria, including groups Washington sees as integral to the fight against Daesh.

Erdogan told Obama that Turkey and the US “should adopt a shared attitude against all terrorist organizations as NATO member countries.”

“There is no good terrorist or bad terrorist; every kind of terrorism is bad,” he said. “We do not want the formation of a terror corridor on our southern [border].”

A US Army High Mobility Artillery Rocket System (HIMARS) conducted a successful strike Friday on a tactical unit and building owned by the Takfiri group, Major Josh Jacques, a spokesman for US Central Command, told AFP.

The detachment, which allows the US to strike a target “with a high degree of accuracy and a significantly greater range,” was deployed to Turkey, Jacques said.

“HIMARS is unique in reducing the potential collateral damage as it impacts a target at a high angle, has a relatively small blast radius for the effect achieved, and functions in all weather conditions,” he added.

“HIMARS is a complementary asset and involves US troops operating artillery from the soil of a NATO ally,” he noted.