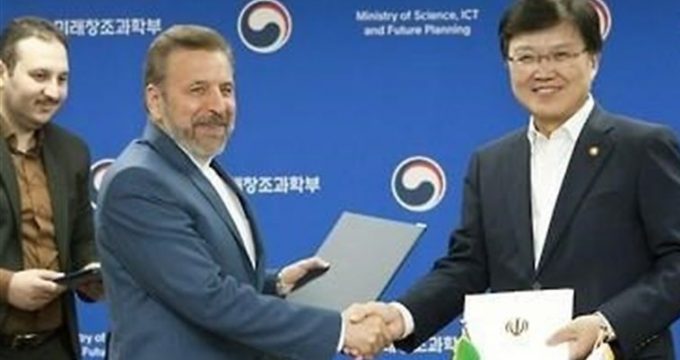 TEHRAN (Tasnim) – Tehran and Seoul have reached a memorandum of understanding (MoU) to increase their mutual cooperation in Information and Communications Technologies (ICT), a report said.

“I asked the Iranian government to largely support South Korean firms making inroads into Iran with a huge potential in the ICT Sector” Choi said following the signing ceremony.

During his stay, Vaezi is scheduled to pay a visit to headquarters of the East Asian country’s major technical firms, including Samsung Electronics Co., the report added.

Back in May, Iran and South Korea inked 19 memorandums of understanding at a high-profile ceremony in Tehran, attended by the two countries’ presidents.

Cabinet ministers and senior officials from the two countries signed the documents as part of efforts to boost the relations between Tehran and Seoul.

The deals are meant to boost bilateral collaborations in a range of fields, from maritime transportation to cultural and academic issues.

The MoUs were on cooperation in the oil, gas and petrochemical industry, management of water resources, technological interaction, medical fields and banking ties, among others.