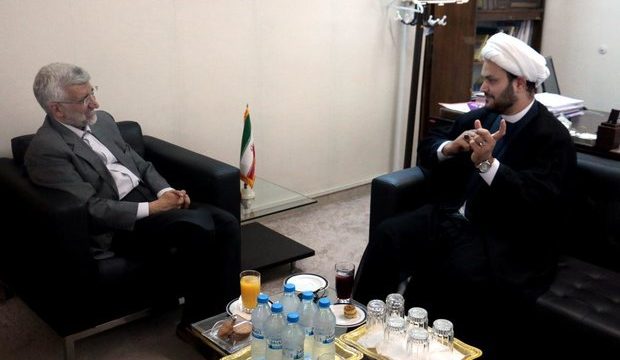 Sheikh Akram al-Kaabi met Saeed Jalili once arriving in Tehran and prior to his visits with other Iranian officials, including Parliament Speaker Ali Larijani and Head of National Security and Foreign Policy Commission of Iran Parliament Alaeddin Boroujerdi.

In the meeting with Jalili, which was held in private, the two sides conferred on various issues, including the influential role of Iran and the commanders in the Resistance Front under the auspices of the Leader of the Islamic Revolution, the necessity of national and religious unity in Iraq, the latest developments in Aleppo, the necessary of participation of the Resistance group Al-Hashd Al-Sha’abi in the decisive operation of Mosul Liberation, and the obvious support from the US, Saudi Arabia, and Qatar to the terrorists in the region.

Sheikh Akram al-Kaabi further deemed the achievements of the Resistance Front indebted to ideas of Imam Khomeni, and expressed hope that ISIL would be eradicated in Iraq by the success of Mosul Liberation operation, and efforts would be organized and united in fighting terrorism in Syria.