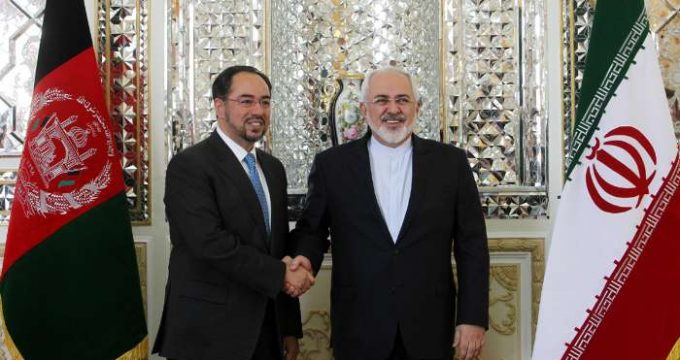 Speaking during a meeting with his Afghan counterpart Salahuddin Rabbani on Monday, the Iranian Minister of Foreign Affairs Mohammad Javad Zarif said Iran attaches great importance to Afghanistan as the neighbor’s development, peace and security would similarly benefit us.

He also emphasized that security issues hold great momentous in both countries calling for continuous negotiations of the two sides over the issue.

Referring to the scourge of terrorism and extremism in the region, Zarif emphasized the need to confront terrorists and said “terrorism cannot be classified into ‘good’ or ‘bad’ and all takfiri and extremist groups need to be eliminated.”

The visiting Afghan official Rabbani appreciated hospitality of the Iranian side and noted that frequent visits of his country’s authorities to Tehran indicate the amount of value that Afghan people and government give to ties with Iran.

He also appreciated the Iranian Leader’s measure in issuing the necessary permit for education of Afghan children in Iran. Salahuddin Rabbani further underlined that Chabahar Port could exert and influential role in development and expansion of Afghanistan.

The two parties at the meeting exchanged views on several issues including formation of water committee, issuance of electronic passport for Afghans, customs tariffs, organizing Afghan emigrants in Iran, extradition of prisoners, transit as well as bilateral cooperation of the two countries in regional and international summits.

The visit to Tehran of Afghan Foeign Minister Rabbani aims to expand and strengthen mutual relations between the two friend and neighboring countries as well as to pave the way for further multilateral cooperation between Tehran and Kabul.