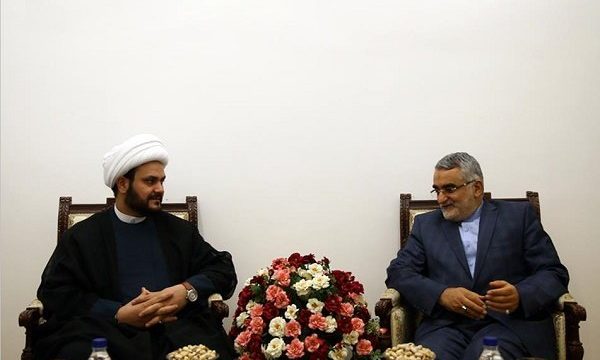 TEHRAN, Aug. 29 (MNA) – Head of Parliament National Security Commission Boroujerdi said Americans and Saudis have tried to enunciate the war in Iraq as religious though Sheikh Sistani thwarted the plot.

Iran’s Boroujerdi pointed to the significance of establishing peace and stability stressing “Parliament and government of the Islamic Republic of Iran would support all measures towards solidity and secureness for eliminating terrorist-Takfiri groups inside the region.”

Conspiracy planned against the axis of resistance in Syria, despite enjoying financial and military assistance by the US, the West and its regional allies, has failed to make a dent in the resistance of Iraqi and Syrian people after more than four years, he underlined.

“We believe that Iraq must remain united as today, America and its regional allies are losers of the dangerous game,” continued Boroujerdi.

He pointed out at the contemporary history of Iraq stating that the past years have been years of difficulty for Iraqi people; “they needed reconstruction after a period of crisis; however, with the occupation of Iraq by the US, hundreds of thousands of Iraqi citizens were killed.”

He deemed it a great honor for Iraqi people that enemies could not continue their occupation and left, while they virtually have remained in any country they have occupied since World War II as countries like Japan, South Korea, and Afghanistan yielded to the Americans’ will.

Touching upon Iraqi people’s resistance against the Americans he clarified “neither the parliament nor the government yielded to Americans’ will and finally Americans left which marks an honor for Iraqi people though the US supported the terrorists in Iraq later on.”

Boroujerdi also said over the past years, the terrorist activities have increased in Iraq which is of course a security challenge; “we have always stood by Iraqi people’s side in times of trouble and will continue to do so.”

Stressing on Iran’s aids to Iraq, the official said “we offered our military experience to Iraq and Syria and the formation of Popular Mobilization Forces was a big step forward.”

He referred to Iran’s stand on Iraq’s future noting “we are against disintegration of Iraq as its integrity has to be preserved which will be to the benefit of Islam and Iraqi people. Americans and their allies have planned to challenge the integrity but they will fail.”

“US seeks to divert attentions from Palestine to civil wars in countries. We have to stand firm against these threats and defend Islamic dignity; nevertheless, Israel will fail and the US will face the same fate as the Soviet Union.”

Stressing on the importance of Iraq for Iran, head of Parliament National Security Commission added “we attach importance to ending of these turbulent conditions and Iran’s relations with Iraq have been on highest level during these years.”

He then pointed out Iran’s independence in military sphere maintaining “we produce and meet all our military needs independently; however, we used to be completely dependent on the US before Islamic Revolution.”

“Enunciating the war in Iraq as religious is a Saudi and American conspiracy,” said he, continuing, “Maraji (sources of emulation) in Iraq are vigilant and have controlled the situation perfectly and we hope to see the end of the crisis in Iraq and Syria.”

The official also referred to the Saudi crimes in Yemen and said Yemen is the symbol of the US and their allies’ crimes in the region as what Saudis do in Yemen is worse than Israel’s crimes in Gaza.

At the end of his remarks, head of Parliament National Security Commission appreciated resistance of Iraqi people and government.

Sheikh Akram al-Kaabi, for his part, said the US does not want ISIL to fail in Iraq and its military operations in Iraq are facades for their conspiracies.”

He stressed that many countries were seeking to break the Aleppo siege and they partially succeeded but we mended the siege once again and now we control Ramouse in Aleppo.

The visiting official underlined that “our forces are present in Iraq under the flag of ‘Popular Mobilization Forces’ (Al-Hashd Al-Sha’abi) and thousands of other soldiers are fighting ISIL in Hezbollah Al-Nujaba Islamic Resistance.”

“The Al-Hashd’s forces stop the disintegration of Iraq and their participation in Mosul liberation operation is indispensable and if Al-Hashd retreats from Western regions of Iraq, ISIL terrorists will enter the country once again from Syria,” he added.

Stressing the negative role of the US in Iraq, he said “Americans do not want ISIL to fail in Iraq and they are only looking for feint victory as they only seek creating a balance of power between Al-Hashd and ISIL.”

Deeming the presence of Al-Hashd forces in Syria as necessary, he added “the liberation of Al-Raqqah and Deir ez-Zor in Syria is a matter of National Security for Iraq; by an agreement with Syrian government, Al-Hashd forces must enter Syria on land and free these strategic cities.”

Sheikh Akram al-Kaabi later noted al-Nijab’s stand towards Islamic Republic of Iran, concluding “we believe that Iran is the leader of true Islam in the world and the Leader of Islamic Revolution is its authority and Ahlul Bayt (AS) have mentioned that Imam Mahdi will come from Khorasan in Iran.”