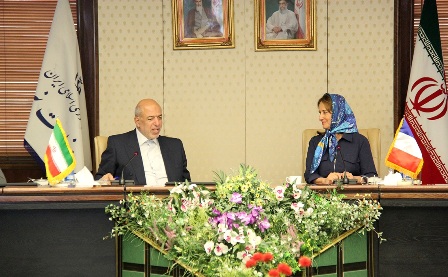 Hamid Chitchian, on the sidelines of a meeting with the visiting French Environment Minister Ségolène Royal, pointed to capacities and potentials of Iran in power and water industries saying “at the present time, the country’s electricity production capacity reaches more than 75,000 megawatts.”

“About 12 thousand megawatts of the existing capacity pertains to hydroelectric plants and renewable energies and one thousand to nuclear generators while the rest is supplied by thermal power houses,” said the official asserting “versatile venues exist for Tehran-Paris cooperation as well as that Iran’s remains committed to its obligations defined by the 2015 Paris Climate Conference which called for zero net anthropogenic greenhouse gas emissions to be reached during the second half of the 21st century.”

Energy Minister Chitchian went on to add that plans have been made to build 7,500 megawatts of renewable energy power houses by 2030 inside the country 5,000 megawatts of which will be constructed within the next five years.

The first agreement has been sealed with the French side to build a geothermal power plant with a capacity of 5 thousand megawatts, noted the official voicing Iran’s readiness to launch collaborations with the French through investment or the use of modern manufacturing systems.

Hamid Chitchian, while recalling Iran’s earlier close-knit ties with a French firm over water consumption management, referred to poor conditions of water resources resulting from climate change and emphasized “Iran remains as one of the victims of climate change in the world which has exerted its adverse effects in the form of drought.”

“Iran has entered into fruitful contracts with France and Sweden on the issue of water consumption management while the possibility exists for further cooperation in several other areas including deep water exploration, restoration and balance of groundwater as well as use of new technologies in the field of desalination,” he underscored.

The Iranian official outlined banking issues as a major obstacle to cooperation with European countries expressing hope that effective measures will be taken to remove existing barriers in order to expedite and expand collaborations between Tehran and Paris.

The 2015 United Nations Climate Change Conference, COP 21 or CMP 11 was held in Paris, France, from 30 November to 12 December 2015. It was the 21st yearly session of the Conference of the Parties (COP) to the 1992 United Nations Framework Convention on Climate Change (UNFCCC) and the 11th session of the Meeting of the Parties to the 1997 Kyoto Protocol.