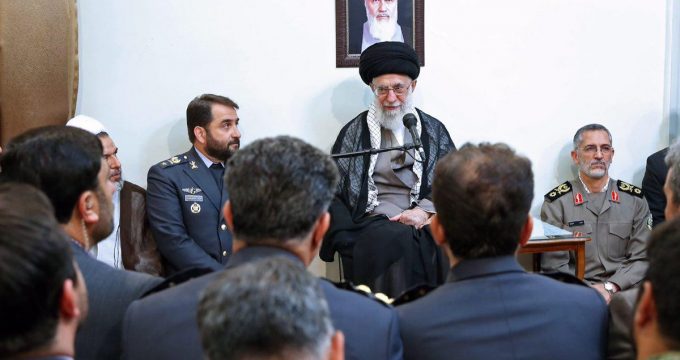 Supreme Leader: Iran to give crushing response to enemies’ aggression

TEHRAN (FNA)- Supreme Leader of the Islamic Revolution Ayatollah Seyed Ali Khamenei warned the enemies that they will face Iran’s harsh response if they dare to launch a military attack against the country.

“The enemy should understand that if it makes any aggression, it will be hit hard and our defense will also include response,” Ayatollah Khamenei said in a meeting with commanders of Khatam ol-Anbia Air Defense Base in Tehran on Sunday.

Warning that the enemy is after weakening Iran’s defense power, he said, “We should increase the Armed Forces’ preparedness to the extent that the enemy doesn’t even allow itself to think about aggression.”

Ayatollah Khamenei referred to the enemies’ ballyhoos and opposition to Iran’s purchase of the S-300 missile defense system from Russia, and said, “The S-300 system is a defensive and not offensive tool but the Americans have made their utmost efforts to prevent the Islamic Republic’s use of this possibility.”

“We are facing such an enemy which doesn’t respect our nation’s right of defense and actually wants us to remain defenseless so that they can launch aggression against our country whenever they want,” he added.

His remarks came hour after Commander of the Islamic Revolution Guards Corps (IRGC) Navy Rear Admiral Ali Fadavi downplayed the US military power to launch a war against Iran, stressing that Tehran has even harnessed Washington’s power in the sea.

“The US doesn’t enjoy the power to confront Iran militarily,” Rear Admiral Fadavi said, addressing a gathering of Basiji (volunteer) forces in the Central city of Arak on Saturday night.

Noting that Washington’s military power has now been confined in the sea, he said that the US warships haven’t for years dared to approach Iran’s territorial waters because 97 IRGC speedboats are always patrolling the Persian Gulf.

In relevant remarks in May, Rear Admiral Fadavi downplayed the US power, and said no naval force in the world dares to threaten the IRGC Navy and its speedboats.

“We at the IRGC Navy and in the sea give no care to the US power and our speedboats don’t recognize the US aircraft carriers” as a power, Fadavi said, addressing a ceremony in the Southern city of Bandar Abbas.

“No one dares to give a dirty look at Iran let alone launching a war,” he added.

Fadavi said the United States doesn’t even think of attacking Iran for fear of a huge backlash to its interests.

“Due to the presence of IRGC forces, the Americans do not dare to get near the Iranian borders,” Rear Admiral Fadavi said.

Referring to the failed US wars of the past decade, he said, “Washington seeks to weaken and marginalize countries that follow the Iranian Revolution as their role model; however, this is doomed to fail too.”

“The US presence in the region causes insecurity and therefore it should leave,” Rear Admiral Fadavi added.