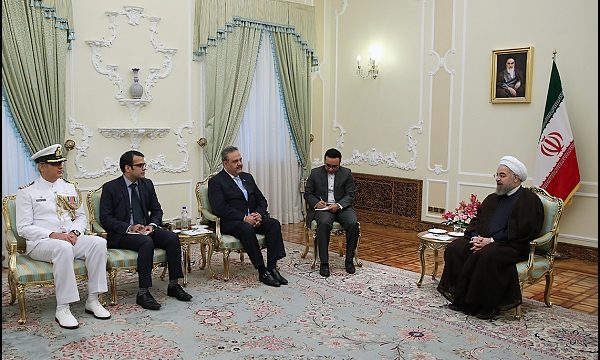 Iranian President Hassan Rouhani made the remark on Sunday while receiving the credentials of Pakistani Ambassador Asif Ali Khan Durrani. Rouhani stressed that the implementation process of signed agreements between the two countries should be expedited so that Tehran and Islamabad would be able to further expand their economic cooperation.

Rouhani also referred to terrorist activities that have no commitment to any Islamic, ethical or humanistic principles, and called for closer joint cooperation with Pakistan for providing security at the borders and across the region; “combating terrorist groups is not an easy task, but our belief is that there is the will and adequate power in the Pakistani army and military forces to fight the terrorists,” Rouhani said.

President Rouhani further highlighted the many cultural commonalities between Iranian and Pakistani nations, calling for more cooperation in cultural, academic, and scientific fields.

The newly-appointed Pakistani envoy, for his part, maintained that Tehran and Islamabad’s strategic cooperation has been well revealed during difficult times, saying the two countries’ commercial and economic relations should improve to the level of political ties.

He also expressed his country’s readiness to expand cooperation with Iran in all areas, including the fight against terrorism.