A Look at Iranian Newspaper Front Pages on August 27

Newspapers on Saturday covered the death of renowned Iranian cinema and theatre actress Davoud Rashidi who recently died at 83.

They also highlighted the remarks made by Intelligence Minister Mahmoud Alavi, who said Saudi Arabia has been creating terrorist rings in Iran in a bid to cause insecurity in the country.

Other top stories included the Iranian Foreign Minister Mohammad Javad Zarif’s visit to Latin America as well as the Vice-President for Women Affairs Shahindokht Mowlaverdi’s call for finding a way to let women go to stadiums. 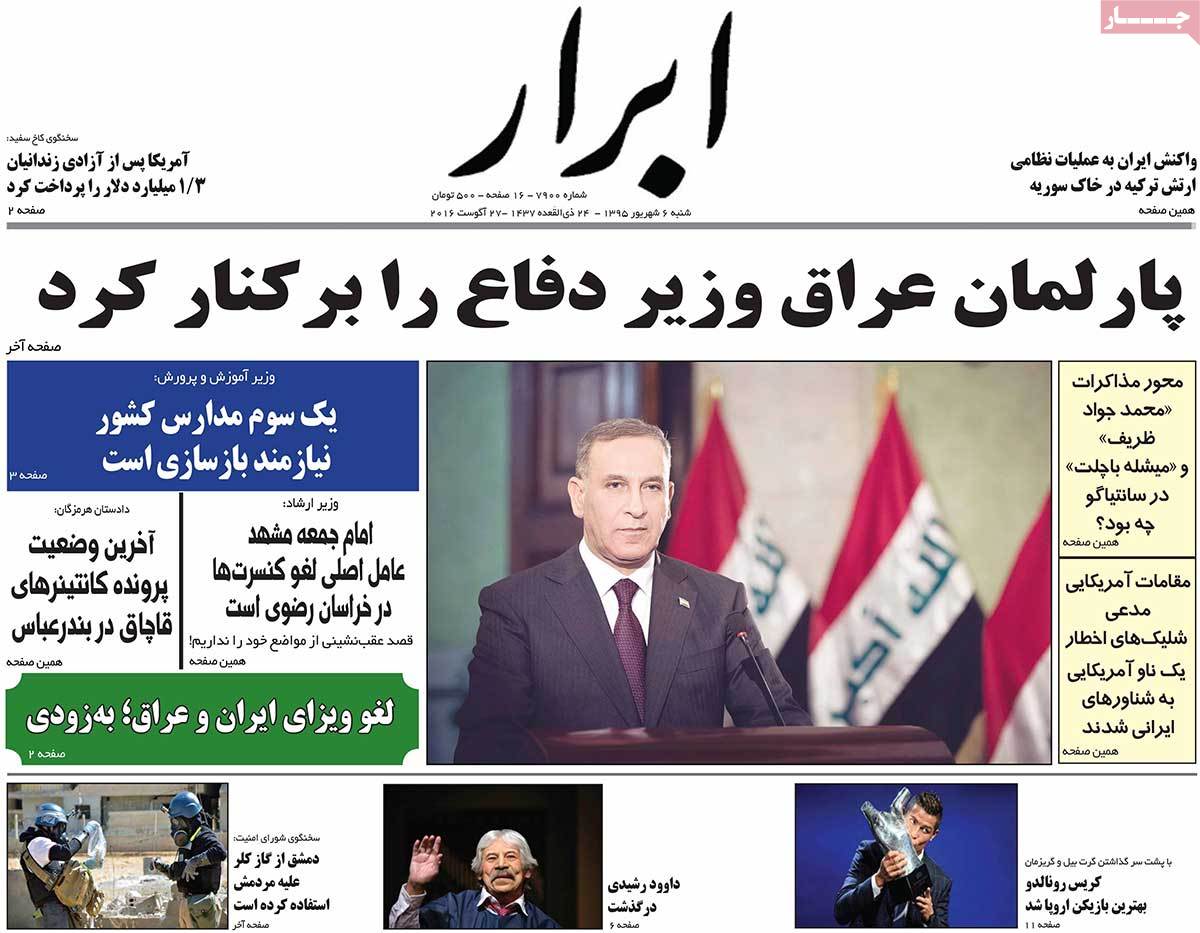 1- Export of Iranian Radars to Other Countries 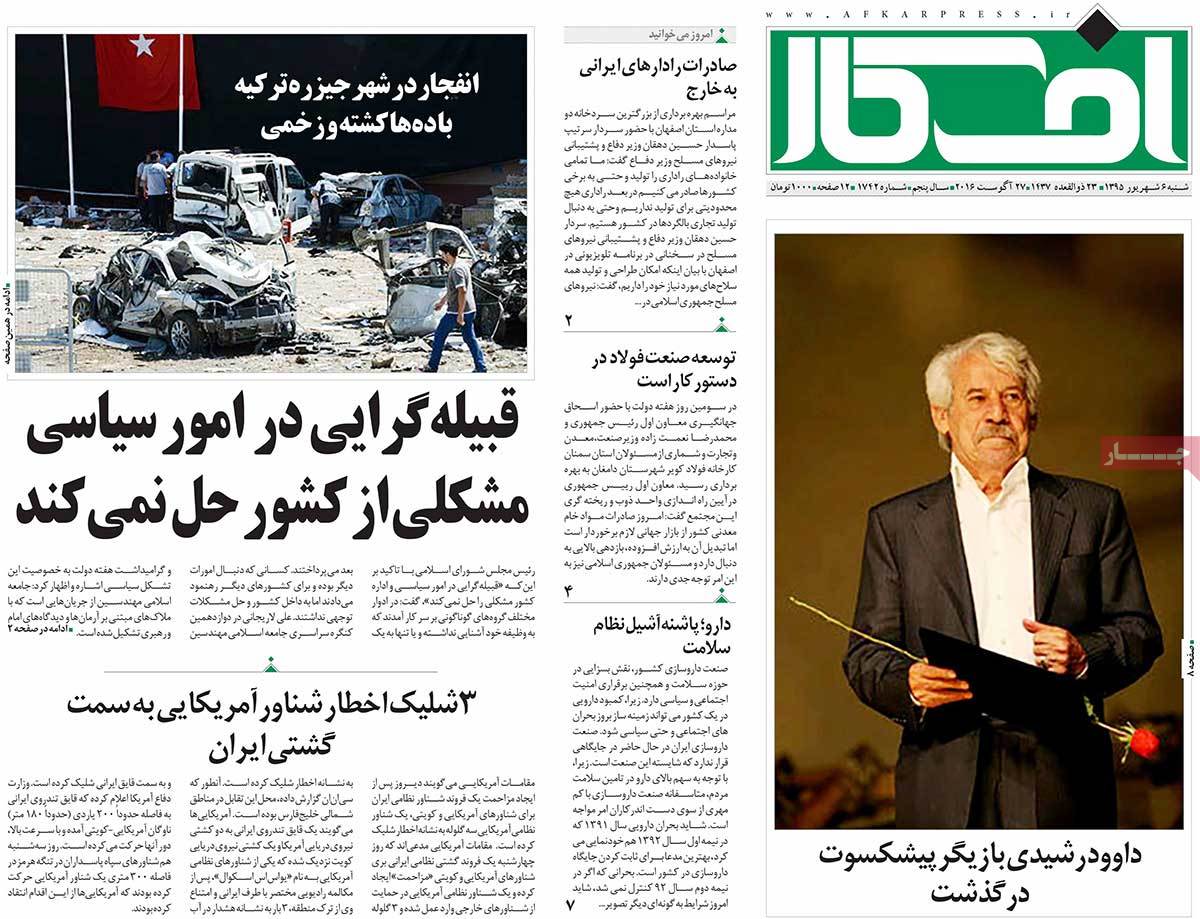 1- Gardener of Cinema Dies: Art Community in Black after Death of Rashidi

3- China’s Interest in Selling Goods to Iran by Instalment 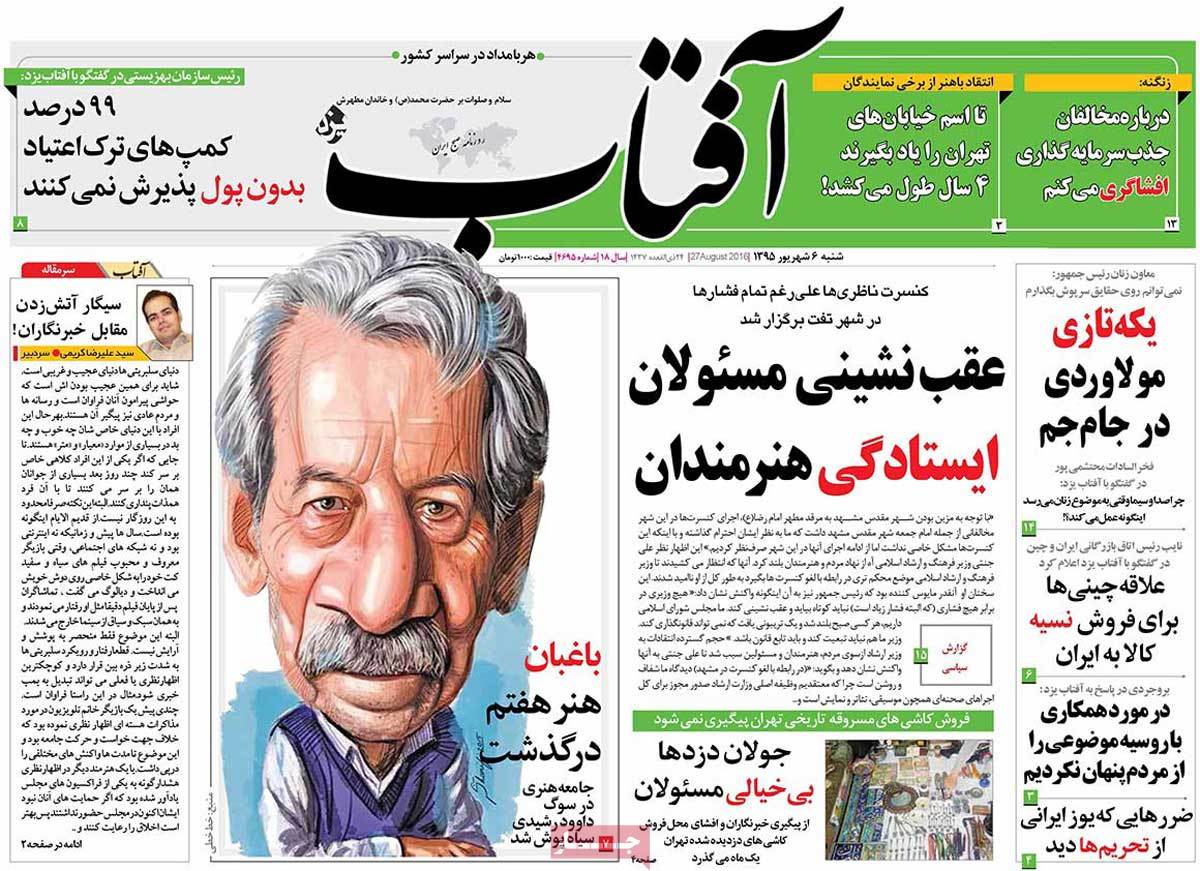 1- Rouhani’s Gov’t Target of Those Who Have Tribunes: Critics Continue Attacking Rouhani on Government Week 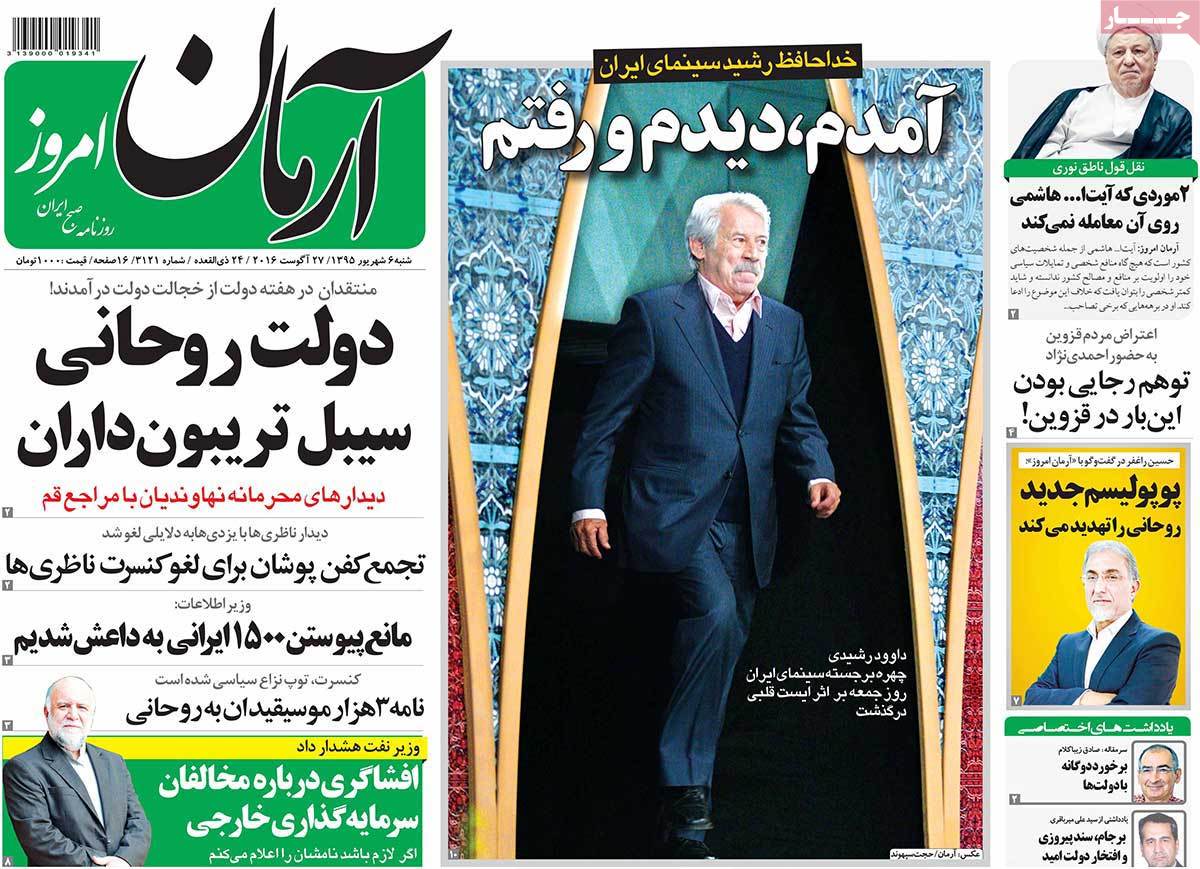 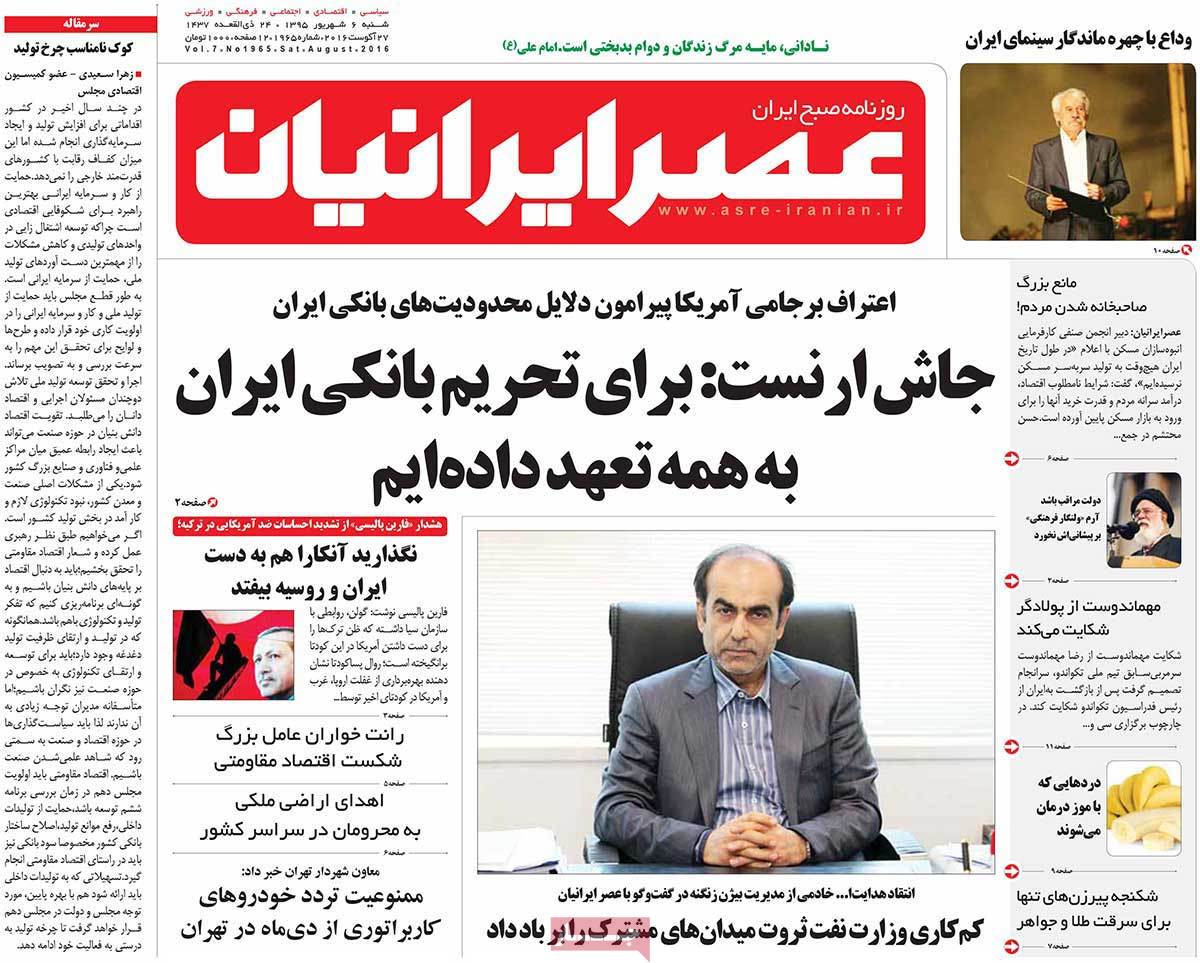 1- Zarif’s Reaction to Kerry: US Should Learn from Its Grave Mistakes

2- Transport Minister: New Planes to Be Delivered to Iran by Year-End

3- Shamkhani: Path to Dialogue between Iran and Saudi Arabia Is Not Blocked 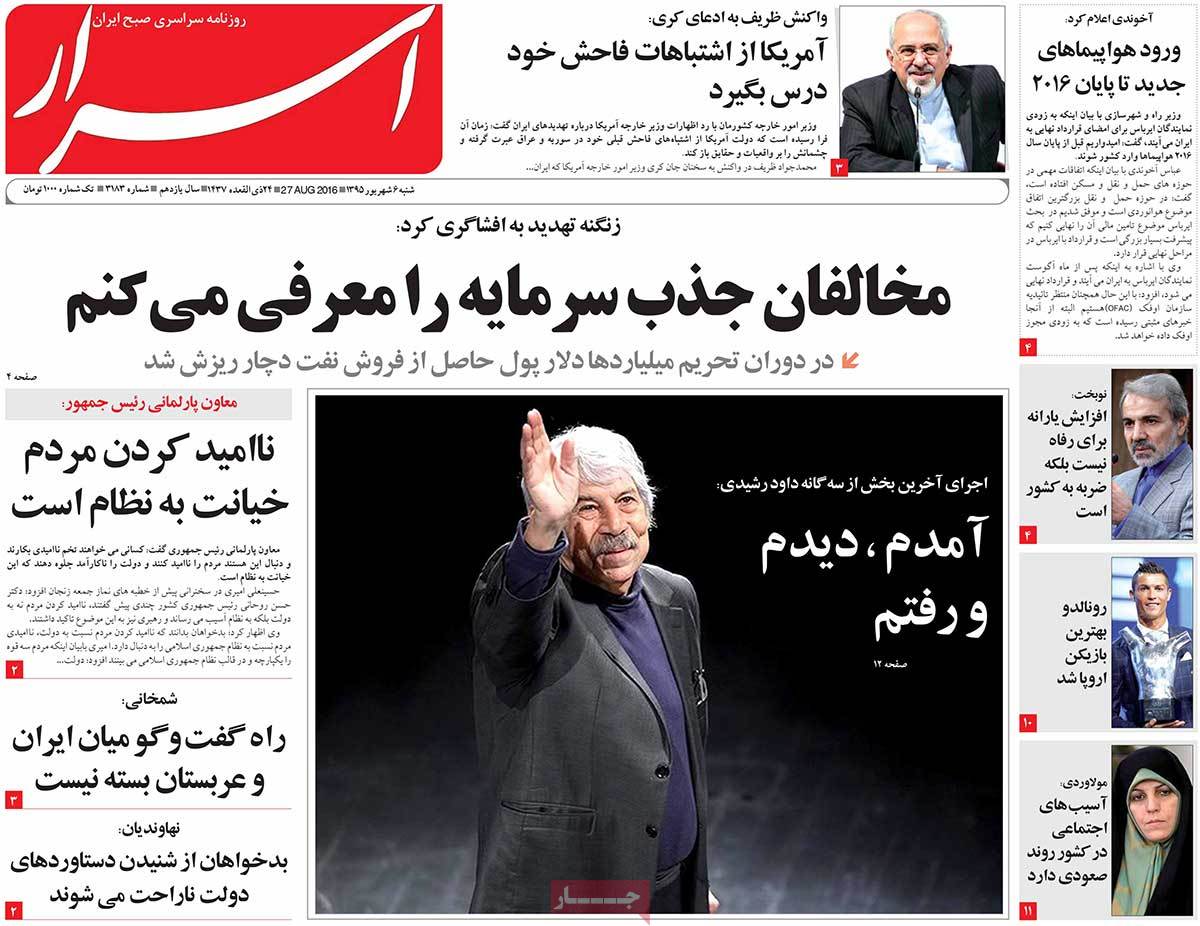 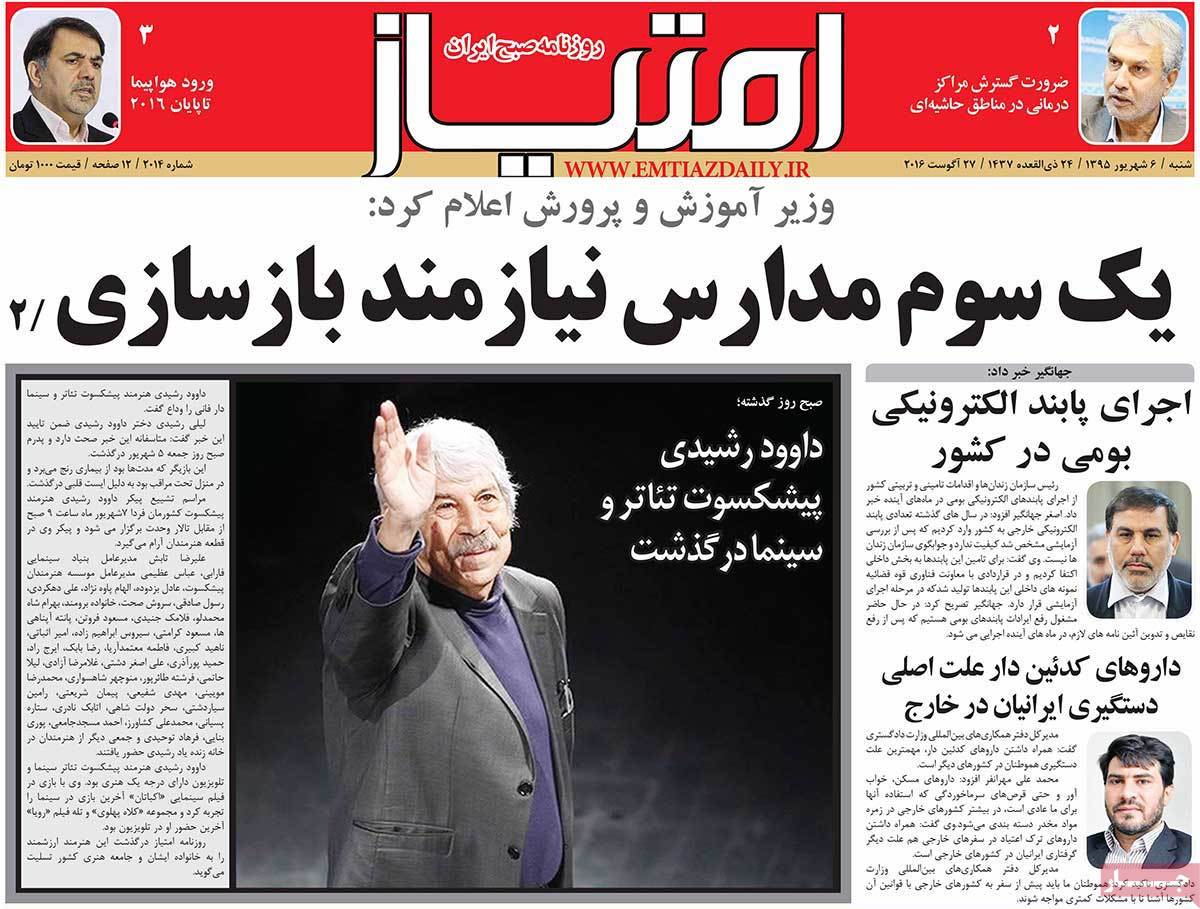 2- VP for Women Affairs: We Should Find a Mechanism to Let Women Go to Stadiums

3- Bolivia’s High Medal Given to Zarif 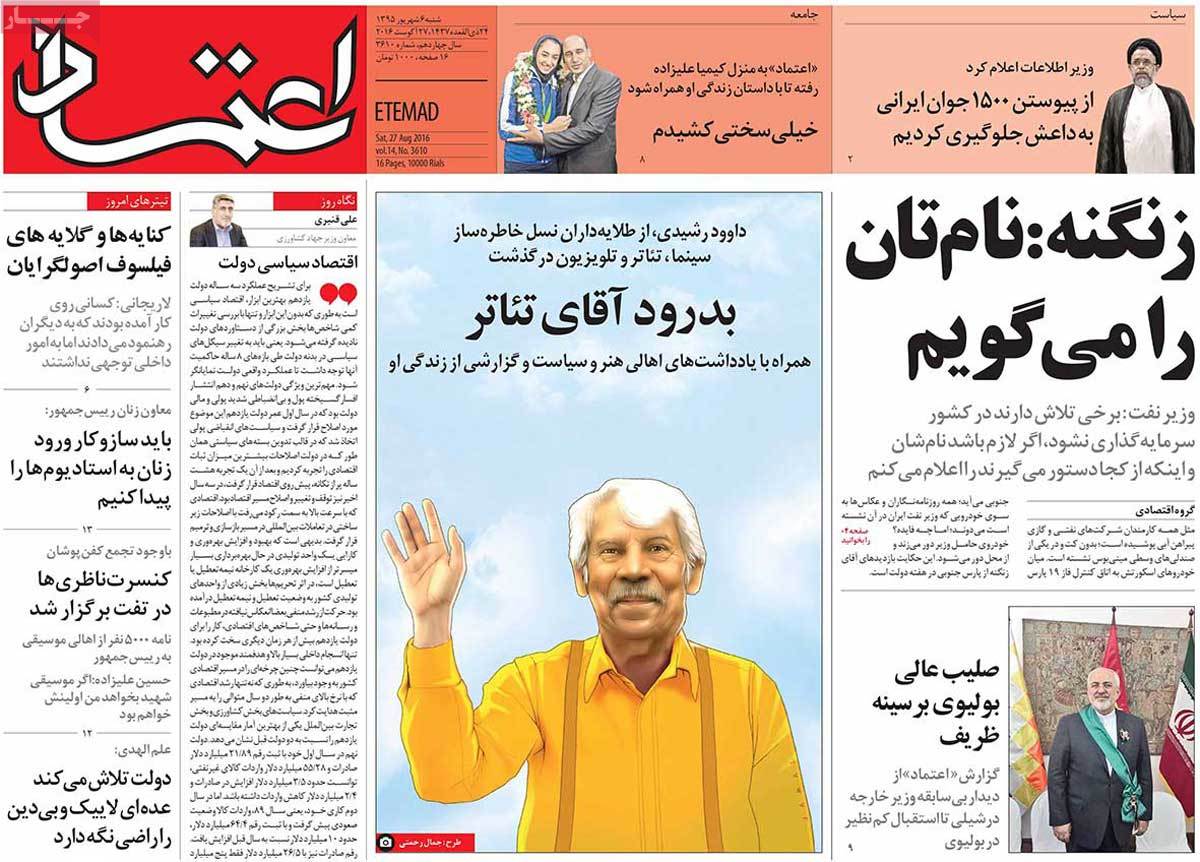 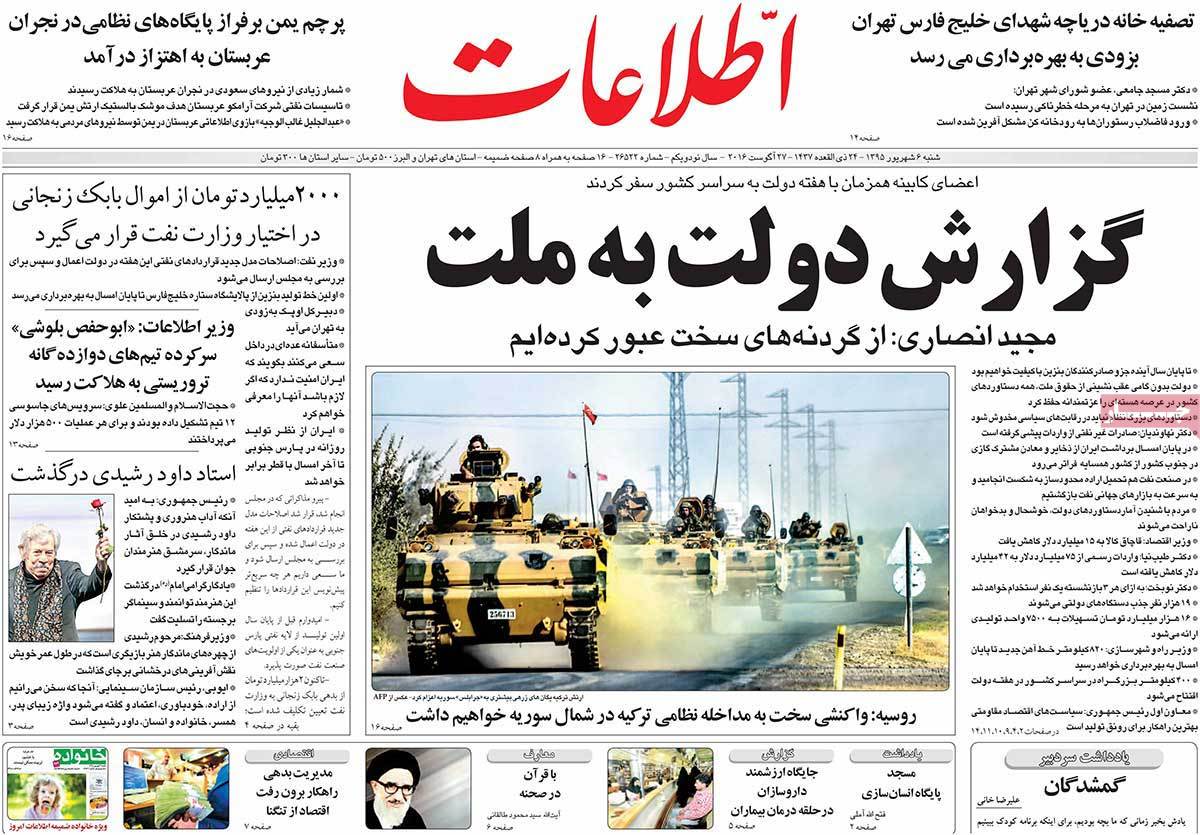 2- Last Survivor of Iranian Soldiers’ Bus Crash Saves Lives of 3 People: Kidney and Liver of the Soldier Given to 3 Needy People after He Went on a Coma 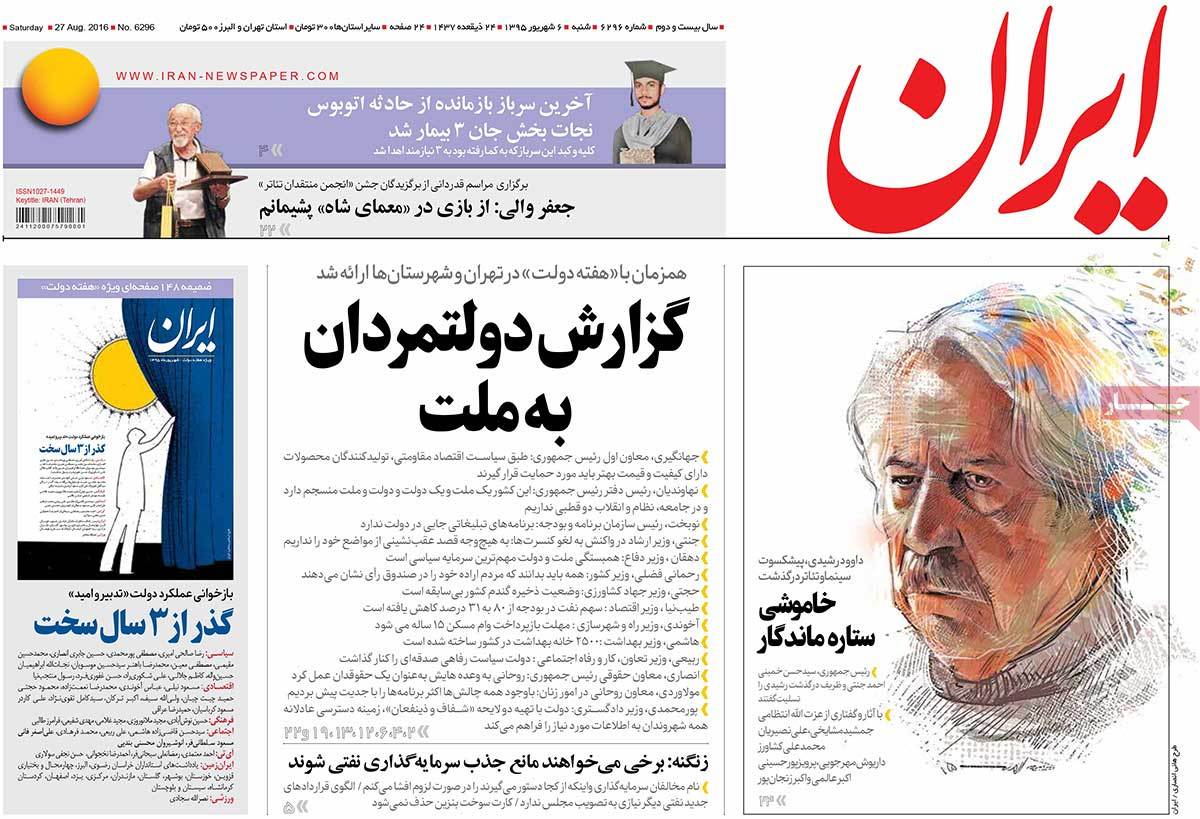 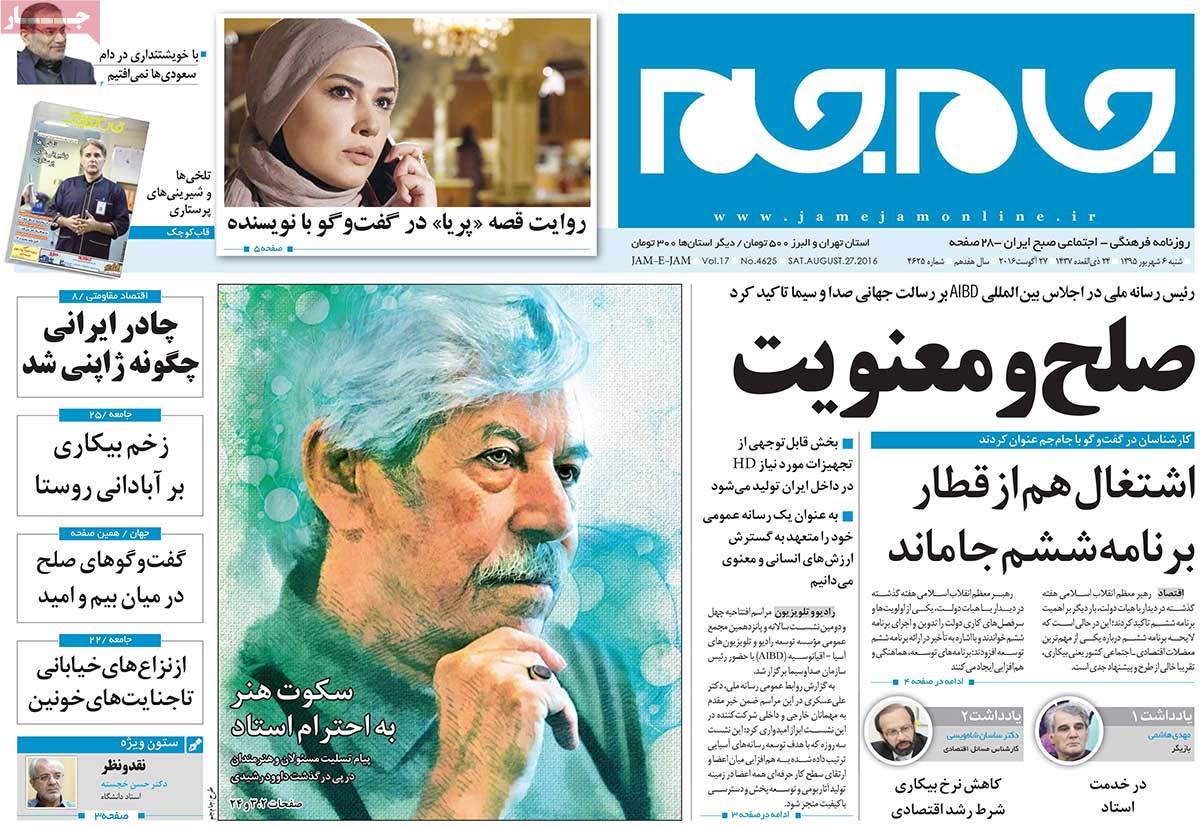 1- Zarif: Leave the US to Me! ‘I’m Prepared to Receive Letter of Comfort from US Treasury Department in a Bid to Convince Foreign Banks into Working with Iran’!

2- American Rope to Save Riyadh from Yemen Deadlock; Kerry to Saudi FM: There’s No Military Solution to Yemen Crisis 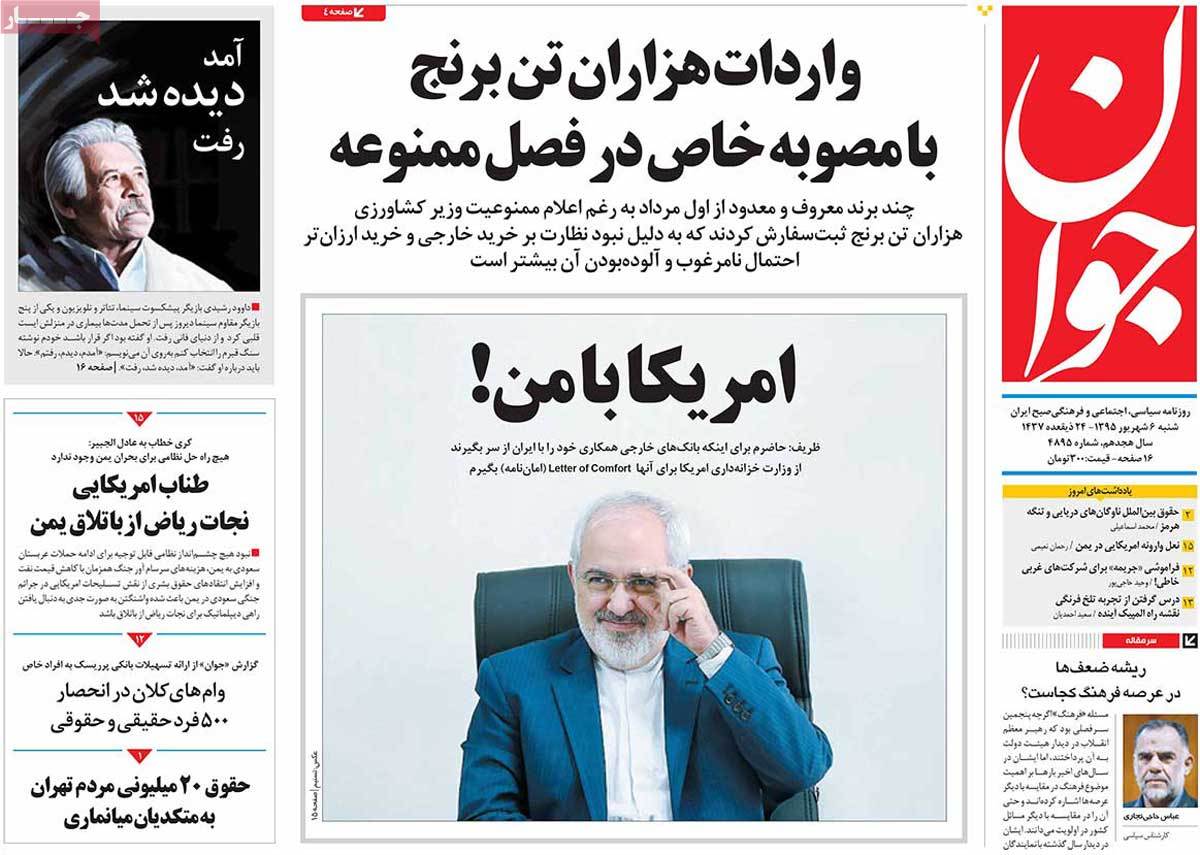 1- US Is Accomplice of Al Saud’s Crimes in Yemen: Zarif in Reaction to Kerry’s Baseless Claim

2- Hundreds of Projects Inaugurated across Iran on Government Week 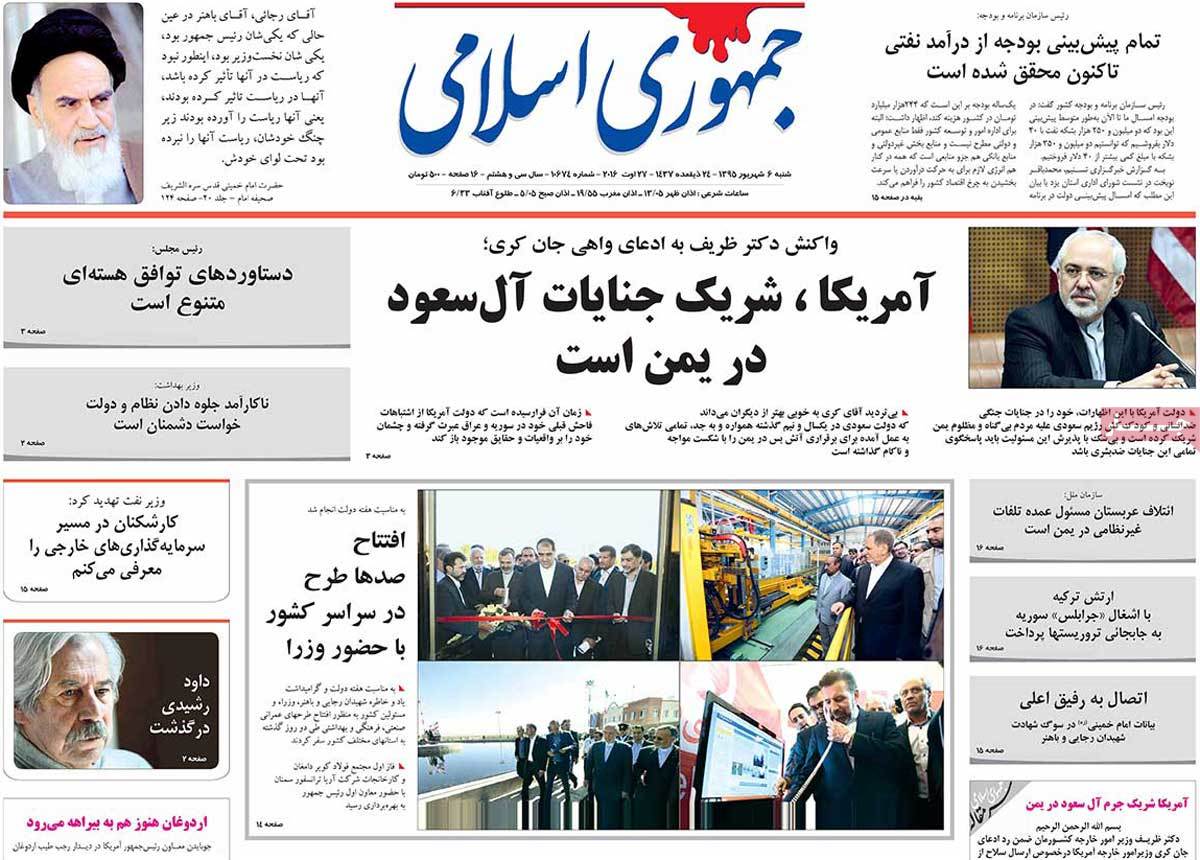 1- Iran’s Support for Any Move that Stabilizes Oil Market: Minister 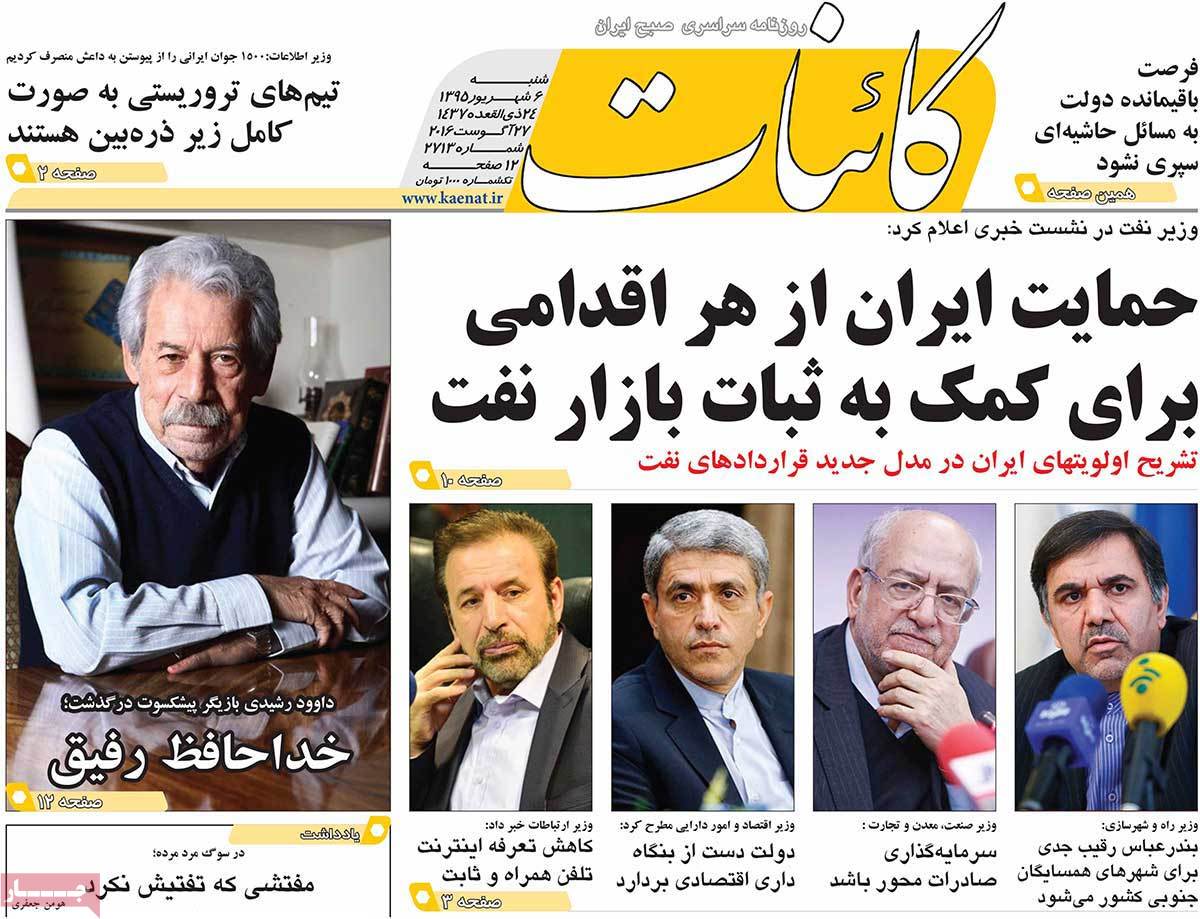 1- Pentagon Analyst: US Is Just a Paper-Made Tiger; They Considered Imam Khomeini a Weak Lion Who Is Scared but Roars

3- SNSC Secretary: Iran Not Afraid of Tearing Up JCPOA; Shamkhani: US Measures Show It’s Not Committed to Nuclear Deal 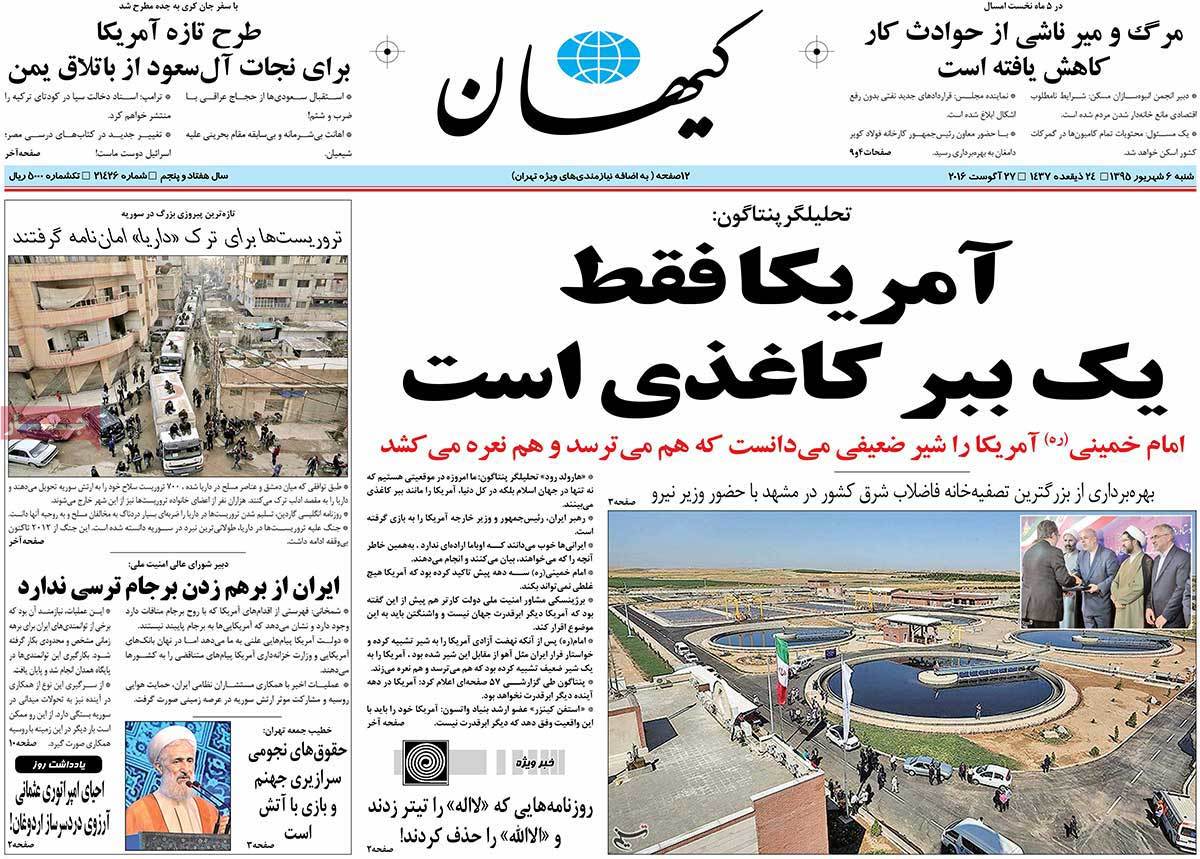 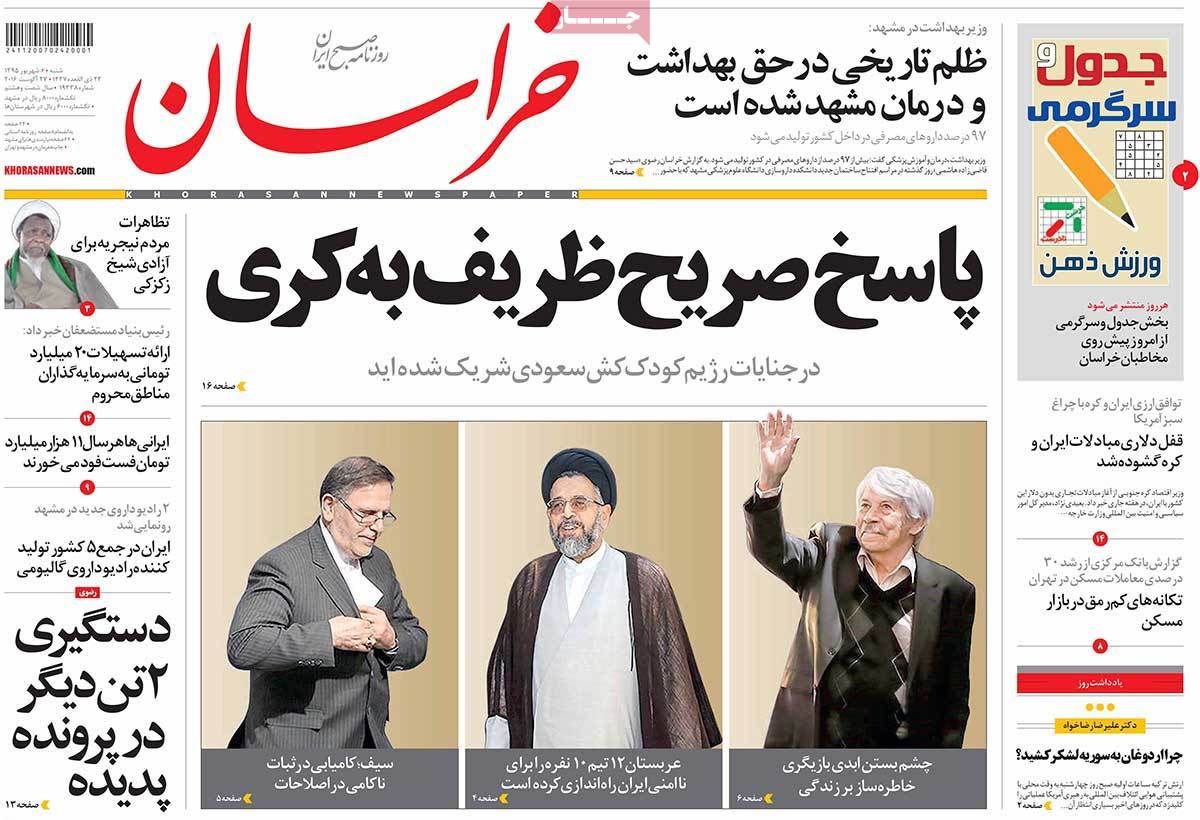 2- Iran-India Cooperation to Remove Grounds for Infiltration of Takfiris [Extremists]: Shamkhani in Meeting with Modi 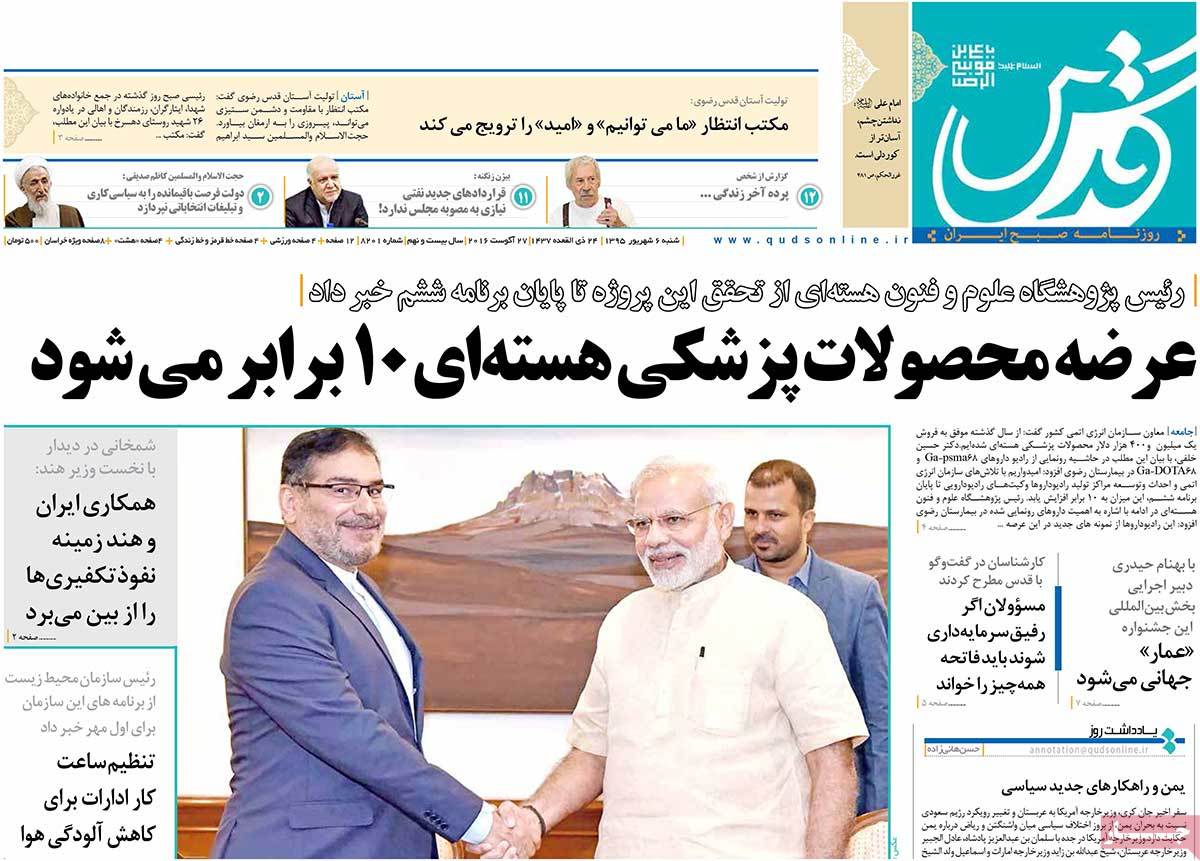 4- Defence Industry Can Respond to Any Type of Threat

5- Democracy Is Endangered Because of a Lack of Strong Parties: Bahonar 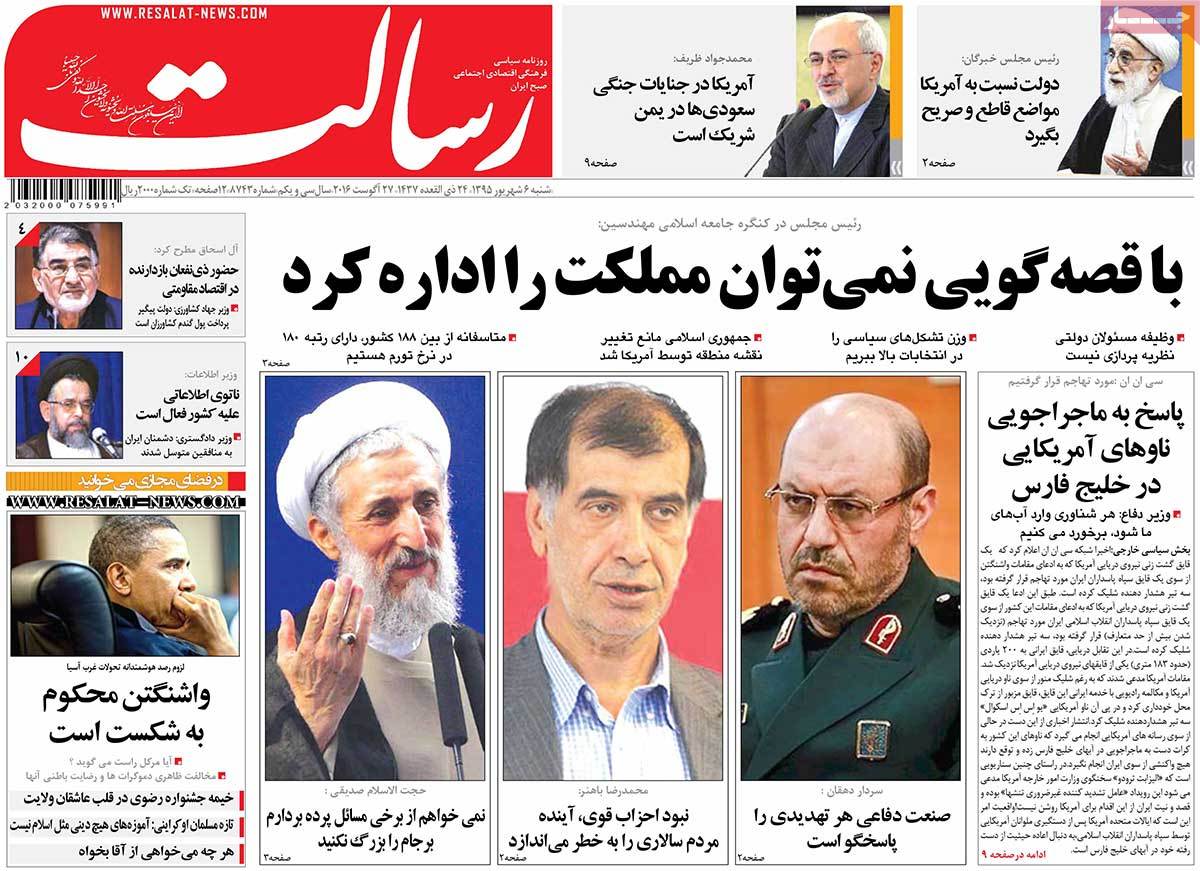 1- Economy Minister: The Blessing of Oil Has Become a Suffering for Iran

2- President’s Chief of Staff: Iran Has an Integrated Government and Nation

3- Third Parties Have No Effect on Iran-India Ties 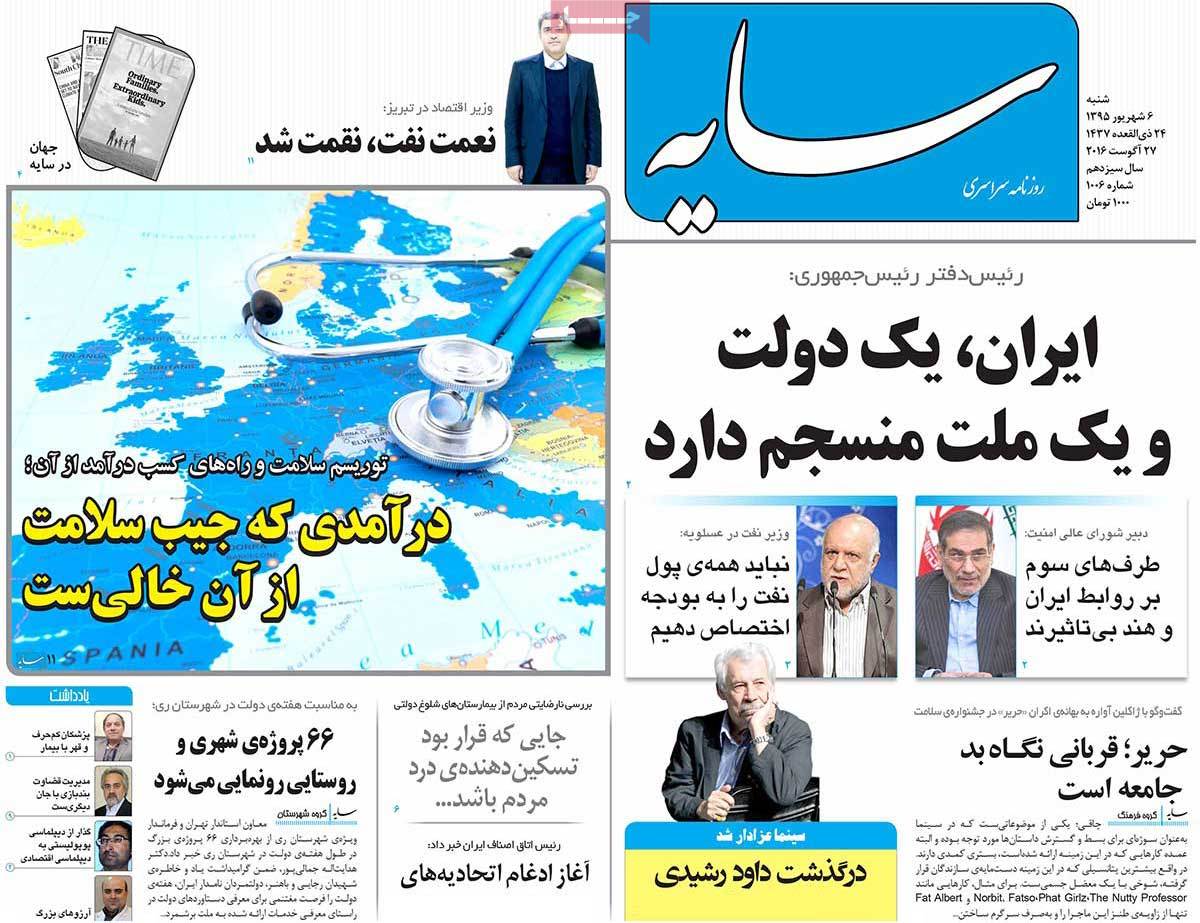 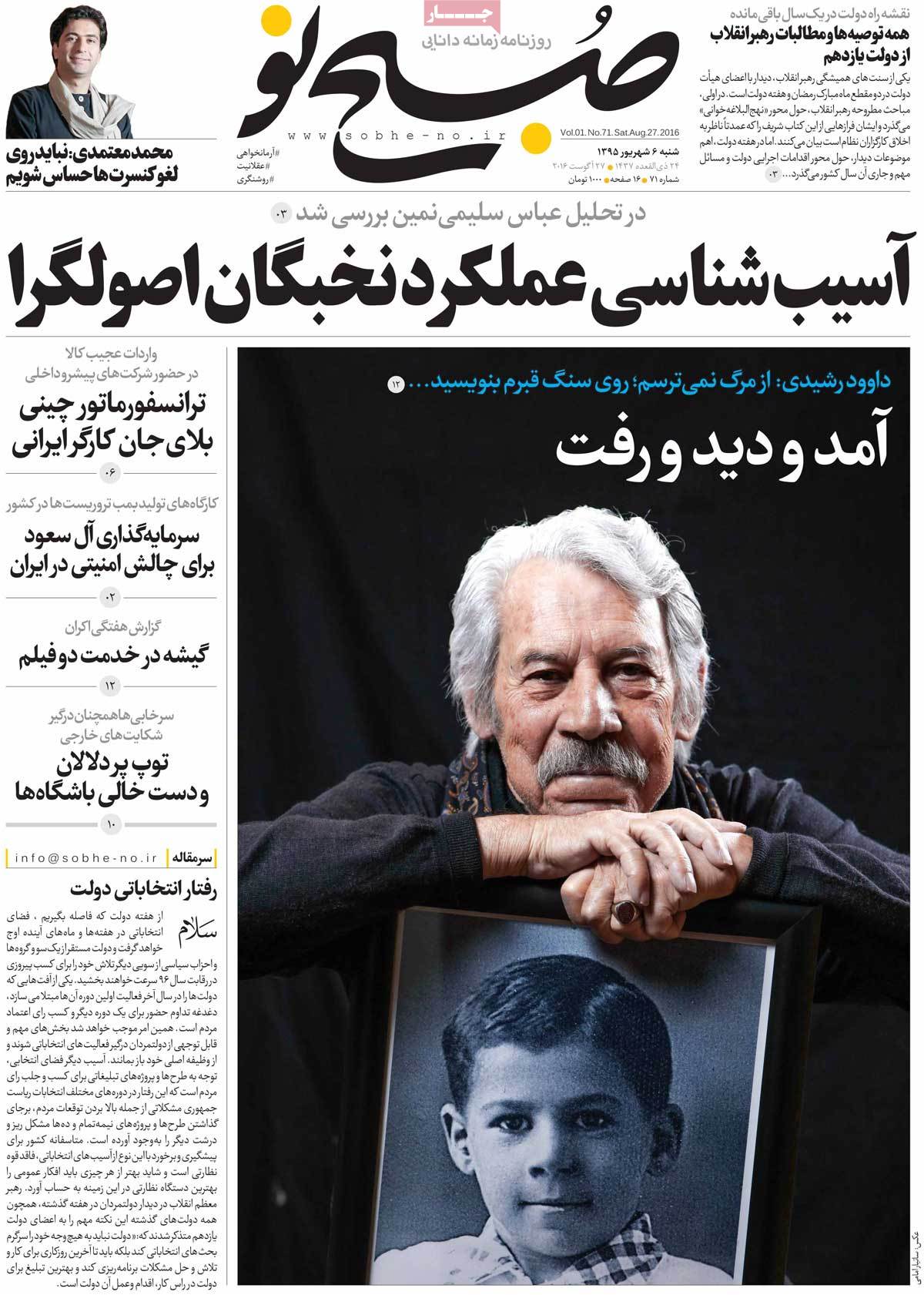 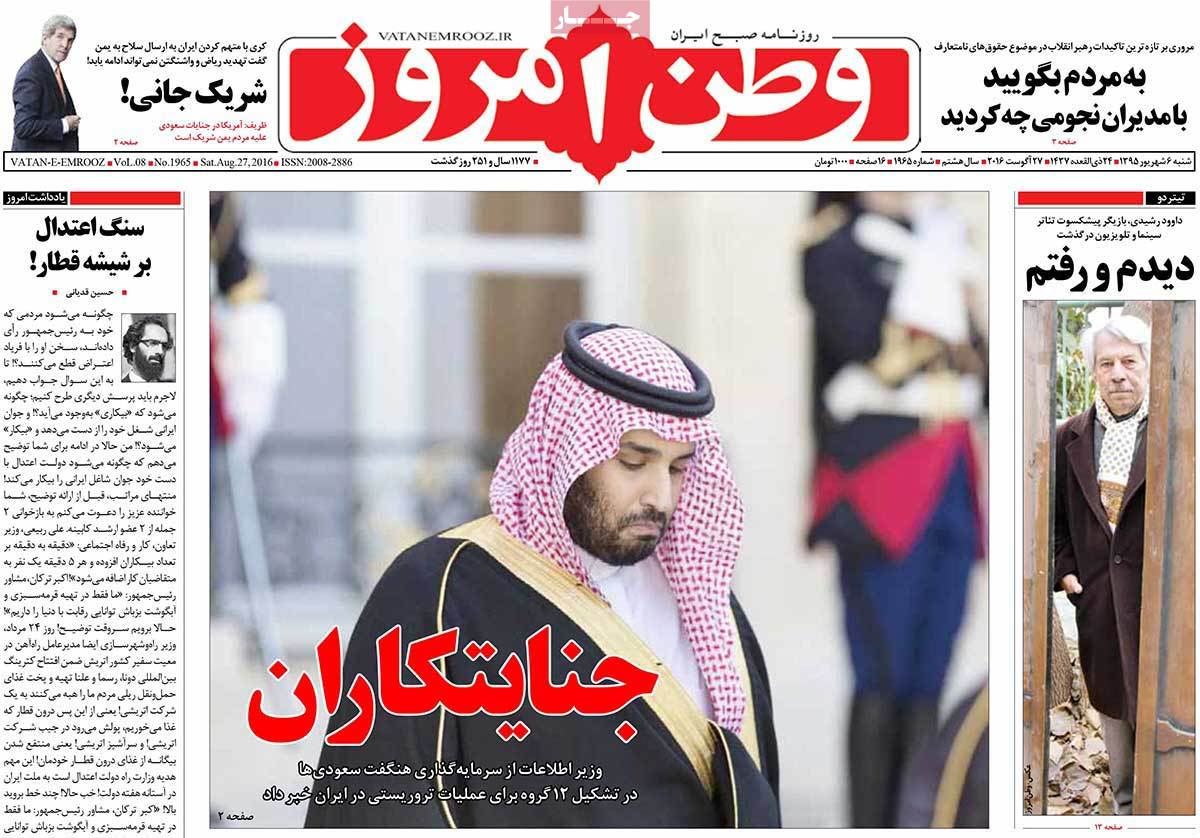