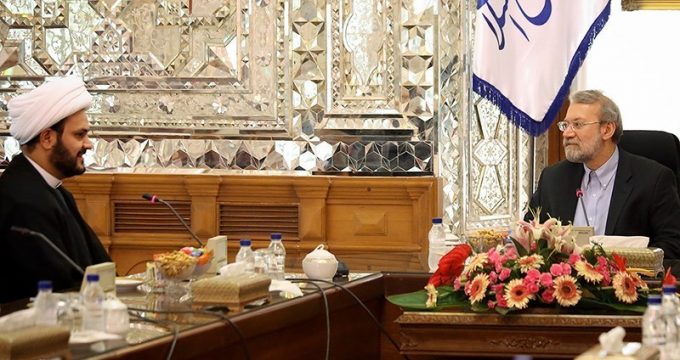 Ali Larijani and Sheikh Akram al-Kaabi met on Saturday in Tehran; “your analysis of the region is accurate and Saudi Arabia is playing a very negative role in the region. However it is important to note that Saudis have always failed in their plans,” he told Mr. al-Kaabi. “Saudi Arabia has been fighting with Yemen for a year and a half now; however they have had no success in this war.”

Clarifying on Iran’s official lien of policy on Iraq, Larijani told the meeting that Iran absolutely opposed disintegration of Iraq, a position supported by high clerical order in Iraq. “Ayatollah al-Sistani’s position on this issue has been critical; it is imperative to know that enemy’s project in Iraq and Syria is an ongoing project and the issue will not be resolved by handful of victories,” he added.

Sheikh Akram al-Kaabi, for his part, believed that Saudi Arabia had been arming terrorists in Syria by extremely expensive rockets bought from the US, delivered to all terrorist groups in Syria through Turkish borders.

Mr. al-Kaabi, who is in his ever visit to Tehran, pointed to the Iran’s aid to Iraqi people “I express my humble gratitude to Iranian people and Leader of the Islamic Revolution who stand by our side in Syria. Iranians have sacrificed much blood and soldiers in Iraq, who had fought along their fellow Iraqi and Syrian soldiers in the battle against terrorist groups,” he told Larijani.

“By the grace of God, many areas which were under control of ISIL have been liberated and we have won several battles by the aid of Iran. These Takfirist terrorists are only present in Mosul and some areas in Al-Anbar deserts now,” al-Kaabi said. “When US occupation forces were in Iraq, they imagined (however futilely) they could eliminate Al-Qaeda through a series of military operations, but since Al-Qaeda had an intellectual base in Iraq and popular support among Sunni tribes, they managed to survive and establish a more mutated version of itself as ISIL.”

Al-Kaabi, who is also major commander of Popular Mobilization Forces of Iraq, believed that the Mosul liberation operation was a decisive battle which would determine the Islamic Resistance future direction; “It is a battle with the US and Barzani’s party, who has trying to form an Israel-supporting government in Iraqi Kurdistan.”

“If resistance groups under Iran’s support were not present in Iraq, the country would be in terrible trouble. As one of the groups under Iranian support, Harakat al-Nujaba is present in all areas of operation in Iraq. We were also present in Aleppo for a long time and actually our forces are currently based in Aleppo, controlling the area,” he detailed.

On the Movement’s cooperation with Lebanese Hezbollah, he told the meeting that “we fought alongside Hezbollah forces in Zeynabieh, Damascus. Along with their fighters, we were under siege in Aleppo for a while, trying to find a way to Khanasir in Aleppo.”

Elsewhere in his speech, al-Kaabi revealed details of support for the Takfirist terrorist groups; “Al-Nusra Front is completely and directly supported by Qatar, with Saudi Arabia and the US to have never withheld support for this terrorist group,” he believed. “These terrorists are so much supplied with military equipment and arms that they even use advanced rockets to target a single person,” he said.

On the so-called ‘ceasefire’ in Syria, al-Kaabi said that the terrorists in Syria would not recognize any ceasefire and peace and use this opportunity to occupy other areas. “According to the documents we have, over 140 countries support terrorism in Syria. In fact, we are not fighting against Takfirists in this country, but that we are fighting against 140 countries under Leader Ayatollah Khamenei’s guidelines and have achieved great victories so far,” he concluded.