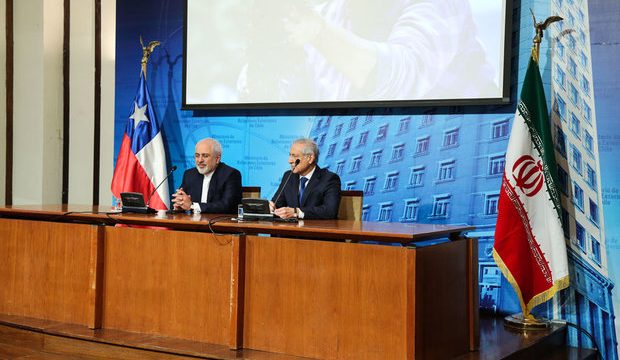 During the meeting, Zarif discussed avenues for promoting mutual cooperation, especially in the field of economy, in the post-JCPOA era.

Based on the deal, both sides can organize political talks on mutual relations and issues of mutual concern in Tehran and Santiago at the level of deputy ministers or the two countries’ representatives.

Zarif told a joint news conference that he is pleased to be first Iranian foreign minister visiting the country and appreciated the Chilean government and people for their hospitability.

Zarif also thanked the Chilean government and people for their support to nuclear deal between Iran and 5+1 Group, saying, ‘We have always been by the Chilean nation and resumed ties with it after the establishment of democracy in the country following Pinochet era.’

‘We are happy to have enhanced political, economic and commercial ties with Chile after the establishment of democracy in it and believe that excellent ties between the two countries will pave the way for economic stability in both countries and region,’ he said.

‘We consider democracy valuable and are ready to sever ties with the countries trample upon democracy,’ he said.

During the news conference, Valenzuela congratulated Iran on the nuclear deal reached between Tehran and 5+1 Group for peaceful use of nuclear energy, saying that the deal has paved the way for new level of ties between Iran and world.

He also said that Iran-Chile trade has improved by 200 percent after the removal of sanctions, hoping that dialogues with the Iranian foreign minister and economic delegation will bear fruit soon.

The two countries share numerous political and economic commonalities, he said, noting that his country is seeking to enhance ties with Iran.