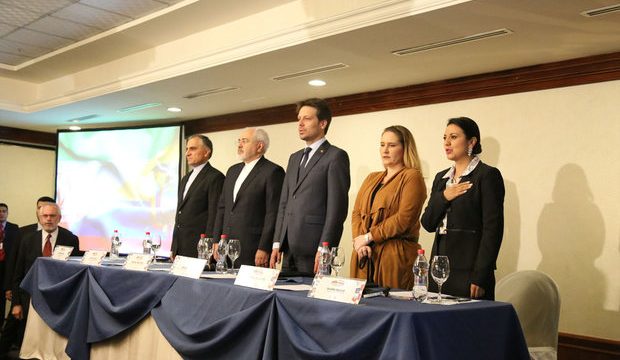 Zarif started his six-nation Latin American tour from Cuba on Sunday night (Aug 21.)
After Cuba, he went to Nicaragua, then to Ecuador.

‘Ecuador’s Foreign Minister Guillaume Long said on Wednesday that the South American country’s authorities spoke with a visiting Iranian delegation about the need to stabilize oil prices,’ the UK Reuters has reported.

Also, online newspaper Al Monitor released a report on the issue saying ‘An Iranian delegation is in South America in hopes of capitalizing on the economic potential after the nuclear deal between Iran and the six world powers.’

Further, Turkish Anadolu Agency has reported that the Ecuadorian Foreign Minister Guillaume Long said ‘We are very admirers of Iran in technological, scientific and biotechnology areas … where it has made progress.’

‘Iran and Ecuador on Wednesday discussed ways that the two countries can strengthen oil prices as Iran signals it may support joint efforts by exporters to prop up flagging crude,’ The Japan Times has released on Zarif’s Ecuador visit.

Zarif is now in Chile as the fourth leg of his Latin American tour. After Santiago, he will fly to Bolivia and Venezuela.