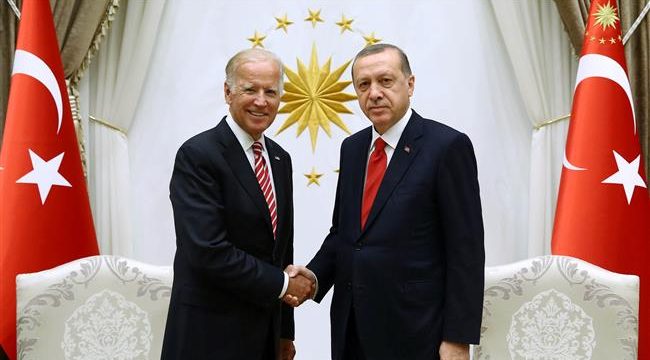 Erdogan made the remarks on Wednesday following a joint press conference with visiting US Vice President Joe Biden and hours after the Turkish military launched an operation on Syrian soil under the pretext of fighting terrorism.

The Turkish president also noted that Turkish-backed Syrian militants had retaken the Syrian town of Jarablus from Daesh Takfiri militants following the incursion that involved Turkish tanks and special forces supported by US and Turkish fighter jets.

“As of this moment, the Free Syrian Army and residents of Jarablus have taken back Jarablus. They seized the state buildings and official institution buildings in the town. According to the information we just received, Daesh had to leave Jarablus,” he said.

In his turn, Biden said the US hoped to continue to work closely with Turkey in the battle against Daesh.

“We believe very strongly that the Turkish border must be controlled by Turkey, that there should be no occupation of that [Syrian side of the] border by any group whatsoever other than Syria that must be whole and united but not carved in little pieces,” he added.

Erdogan said earlier in the day that the operation in northern Syria was launched against such “terror groups” as Daesh and the Democratic Union Party (PYD) – a US-backed Kurdish group based in Syria – that “constantly threaten” Turkey.

Meanwhile, Turkish Prime Minister Binali Yildirim has announced that Ankara’s incursion, which the Syrian government has condemned as an “aggression” against the Arab country, will continue until fighters from PYD-affiliated Kurdish People’s Protection Units (YPG) return to the east of the Euphrates river.

‘No reason to shelter Gulen’

During the press conference, Erdogan also noted the Turkey’s priority is the swift extradition of Fethullah Gulen, a US-based opposition figure viewed by Ankara as the mastermind of a failed coup in the country.

“The agreement between the United States and Turkey requires the detention of such people. This individual continues to manage a terrorist organization from where he is,” said Erdogan.

The coup happened on July 15, when a faction of Turkish armed forces attacked government buildings using tanks and helicopters, in an attempt to seize power from Erdogan. Relations between the US and Turkey soured after Washington refused to extradite the cleric.

“We will abide by our system. We will continue to abide by the system and, God willing, there will be enough data and evidence to be able to meet the criteria that you all believe exist,” said Biden, adding, “We have no reason to shelter someone who would attack an ally and try to overthrow a democracy,” he added.

Earlier, Biden held a joint press conference with Yildirim, in which he denied his country’s involvement in the failed coup against the Turkish government, insisting that Washington is the best friend of the Turkish people.

“The US did not have any foreknowledge of what befell you on the 15th (of July),” Biden said, while condemning the “treasonous” act by the Turkish armed forces involved in the botched putsch.

“The people of Turkey have no greater friend than the United States of America,” he added, while emphasizing the continuation of Washington’s “unwavering support” for Turkey.