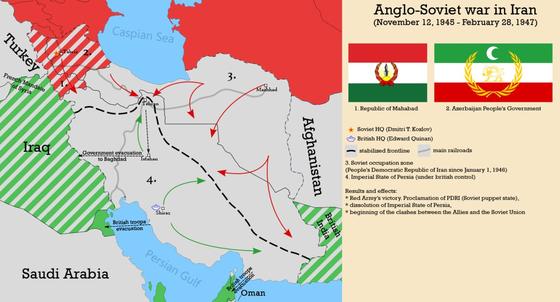 The Anglo-Soviet invasion of Iran refers to the military invasion of the Imperial State of Iran by the United Kingdom and the Soviet Union between August 25 and September 17, 1941. This operation is known by the code name Operation Countenance.

The purpose of the invasion was to secure the oilfields at Abadan to ensure a supply route to the USSR in the struggle against Nazi Germany on the Eastern Front.

Although Iran had declared its neutrality, Shah showed sympathy for the Axis Forces. During this tenure, he was deposed and replaced on the throne by his young son Reza Pahlavi.

Iran, called Persia until 1935, is divided since 1907 into two zones of influence, a Russian north, and the other British, South, in the context of the Great Game between the two empires. These empires benefit from disorder surrounding the Constitutional Revolution of 1905-1911, the weakness and corruption of the last emperors Qajars to expand their influence in the country.

With the end of World War I, British and Russian troops left the country. In 1921, the constitutional monarchy was restored. On February 21, 1921, Colonel Reza Khan (1878-1944), former head of the Cossack guard, became head of government. He filed Ahmad Shah Qajar, the last of the Qajars, and enthroned himself Shah in December 1925. Implementing a policy of rapid modernization of Iran, it relied on the technical assistance of European countries (Germany, France, Sweden) unrelated to the powers who coveted the land above and sign an agreement with the USSR. The economic comparison that operated with Germany, the first trading partner of Iran in 1939, would irritate the British.

Following the German invasion of the USSR in 1941, the UK and the USSR became allies. Reza Pahlavi of Iran was much closer to the Third Reich, while ensuring that the country remains neutral. The British feared that the Abadan refinery, owned by Anglo-Iranian Oil Company, from falling into German hands. But this refinery, which produced eight million tons of oil in 1940, represents a crucial part of the Allied war effort.

For the Soviets, Iran represented a vital channel to channel U.S. aid to the Soviet Union. The raids of German submarines and floating sea ice greatly complicated the convoys through the Arctic to Arkhangelsk. The railway trans-Iranian route was essential for transporting equipment to the Soviet Union from the Persian Gulf.

The USSR and the British Empire were putting pressure on Iran and the Shah, but it only increased tensions and triggered pro-Germanic rallies in the capital, Tehran. Reza Shah refused to expel the many German residents present in Iran. He then refused to use the railway line to the Allies, because of the neutrality proclaimed Iran. This leads to the British and the Soviet invasion of Iran on August 25, 1941.

The Iranian warship Babr (Tiger) after being shelled by the British sloop HMS Shoreham, during the surprise attack on Iran, August 1941.

The invasion was fast and proceeded without major difficulty. In the South, the British command in Iraq (known to Iraq force), renamed six days later in Persian and Iraqi command (Paiforce), under the command of Lieutenant-General Sir Edward Pellew Quinan of the British Army, in advance Iranian territory.

The Soviets from the north with the 44th, 47th and 53rd Armies of the Transcaucasian Front of the Red Army under the command of General Kozlov. Naval and air forces were also involved in the battle.

The Iranian army mobilized nine infantry divisions. Reza Shah called with U.S. President Franklin Roosevelt in the words of the Atlantic Charter: “… Based on statements that your Excellency has made repeatedly about the need to uphold the principles of international justice and the right of peoples to freedom. I ask your Excellency to take effective and urgent humanitarian steps to put an end to this act of aggression. This incident takes place in a peaceful and neutral country that has no other aim than the preservation of its tranquility and its reforms. ” – A letter dated on 25 August

However, this call failed to get a quick response of U.S. President to save the nation of the Shah, as shown in response to Roosevelt: “Seeing that the issue in its entirety is based not only on the vital question to which your Imperial Majesty refers, but also on other basic considerations raised by the global ambitions of Hitler’s conquests. It is certain that the movement of conquest ofGermany will continue and will expand from Europe to Asia, Africa, and even the Americas, unless stopped by military force. It is also clear that countries that wish to retain their independence must engage in a great common effort if they do not want to be swallowed up one by one, as happened to many countries in Europe. In recognition of these truths, the Government and people of the United States of America as we know, not only now developing the defenses of these countries with all possible speed, but they are also entered a huge extensive program of material assistance to countries that are actively engaged in resistance to German ambitions for world domination. ”

Roosevelt also reassured the Shah by noting “the Iranian government statement made by British and Soviet governments, stating that they have no designs on the independence or territorial integrity of Iran.” However, the Soviets will introduce later separatist states in the north, while the U.S. and the UK will help to overthrow the popular and democratically elected Iranian Prime Minister Mohammad Mossadegh during the Abadan crisis in 1953.

The campaign began at dawn on August 25 by an attack on the British ship HMS Shoreham in the port of Abadan. The Iranian sloop Palang (“Panther” in Persian) fast flowing, and the remaining vessels were destroyed or captured. Resistance did not have time to organize and oil installations in Abadan was invested by two battalions of the 8th Indian Division’s 24th and Indian Brigade making an amphibious crossing the Shatt al-Arab from Basra. A small force landed at Bandar-e-Shahpur HMAS Kanimbla the auxiliary cruiser to secure the port and oil installations there.

The Royal Air Force attacked airbases and communications. The 8th Indian Division (18th Brigade of the 25th Brigade more under the command of the 10th Indian Division) ahead of Basrato Qasr Shiekh (which was taken on August 25th) and August 28 reached Ahwaz when the Shah ordered the cessation of hostilities. Further north, there were eight British and Indian battalions under the command of Major-General William Slim advance of Khanaqin (160 km northeast of Baghdad and Basra 480 km) to the oil fields of Naft-i-Shah, through Pai Tak Pass, leading to Kermanshah and Hamadan. The positions of the Pai Tak were taken on August 27 when the defenders go into the night and the air assault was given on August 29 Kermanshah, advocates calling for a truce to negotiate surrender terms.

As for the USSR, which justifies its intervention by the sixth paragraph of the Treaty between Moscow and Tehran in 1921 which clearly stated that the Soviet Union had the right to introduce its troops in the neighboring territory if they develop a threat on its southern borders, it moves from north to Maku, whose defenses have been weakened by air strikes. There are also Soviet landings at Bandar-e Pahlavi on the shores of the Caspian Sea. In one incident, a Soviet ship suffered a “friendly fire”.

Without any outside help, the Iranian resistance was quickly overwhelmed and neutralized by tanks and infantry Russian and British. British and Soviet forces met at Senna (160 miles west of Hamadan) and Qazvin (160 kmwest of Tehran and320 kmnorth east of Hamadan) on August 30 and 31 respectively. Iran was defeated, the oilfields were saved and the precious railway trans-Iranian in Allied hands.

Lacking transportation, the British decided to make no strength between Hamadan and Ahvaz. Meanwhile, the new Iranian Prime Minister Foroughi, accepted the departure of the German ambassador and his embassy staff and the closure representations German, Italian, Hungarian and Romanian. In addition, all German citizens must be handed over to Soviet authorities and the UK. Non-fulfillment of this condition triggered the entry of Soviet and British troops in Tehran on September 17, the day after the arrest of Reza Shah and his departure into exile in Mauritius at first and then South Africa, leaving his son Mohammad Reza Pahlavi replaced on the throne. Soviet and British forces left Tehran on October 17, after the German spies had understood that indeed Iran had sided with Soviet and British for the remainder of the war.

Losses in naval operations were of two Iranian warships sunk and four others rendered useless by the Royal Navy. Six Persian fighters were killed. Approximately 800 soldiers, sailors and pilots Iranians were killed, including Gholamali Bayandor, Iranian admiral of the fleet. Approximately 200 civilians were killed in air raids in Gilan. British and Indian losses amounted to 22 dead and 42 wounded.

Abadan under occupation during World War

With this occupation corridor Persia was kept open and could provide a massive flow of material (more than 5 million tons of military equipment) to the USSR but also mainly to British forces in the Middle East. Following the abdication of his father, Mohammad Reza Shah of Iran was September 16, 1941. The inexperienced young man, who is propelled to the Peacock Throne at the dawn of the twenty-two years, began his reign with a purely nominal power and protocol, severely limited by the British.

Exasperated by the liberties taken by Reza Shah, the latter had toyed with the idea of rehabilitating the Qajar dynasty. So they threw their sights on Soltan Hamid Mirza who was the son of former regent Mohammad Hassan Mirza and nephew of Ahmad Shah Qajar. However, the likelihood of this pretender to the throne seemed very weak as his profile revealed significant flaws: Soltan Hamid Mirza did not speak Persian and knew better London and the Italian Riviera that left his homeland at the age of four years.

The new Shah signed a treaty of alliance with the British and the Soviets in January 1942 that Iran provided a non-military assistance to the Allied war effort. Article five of the treaty, although not fully respected by the Iranian leadership, committed the Allies to leave Iran “not more than six months after the cessation of hostilities.” In September 1943, Iran declared war on Nazi Germany, thus qualifying it for membership of the future UN. At the Tehran conference in November this year, President Franklin D. Roosevelt, Prime Minister Winston Churchill and General Secretary Joseph Stalin reaffirm their commitments to Iran’s independence and territorial integrity and show their goodwill by extending economic assistance to Iran.

After the war ended, the British withdrew but Soviet troops stationed in northwestern Iran not only refused to withdraw but also supporting a revolt that led to the creation of ephemeral states separatist and pro-Soviet in Iranian Azerbaijan in late 1945: the People’s Government of Azerbaijan and the Republic of Mahabad. Both are Soviet puppet governments. This triggered the Iranian-Soviet crisis, Soviet troops withdraw from Iran in May 1946 after receiving a promise of oil concessions. Without Soviet troops to protect them, the Soviet republics of the North collapsed and the oil concessions were revoked. This is the context of Iran’s occupation by foreign troops has been writing the Persian anthem EyIran in 1946.