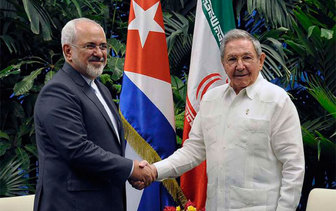 Zarif and Castro discussed latest regional and international developments and explored ways of enhancement of bilateral ties between Tehran and Havana.

Promoting economic cooperation and holding the upcoming summit of Non-Aligned Movement in Venezuela were major topics of discussions between Zarif and Castro.

Before meeting with Castro, Zarif had also a meeting with Cuban Vice President Ricardo Cabrisas Ruíz and discussed promotion of economic cooperation between the two states.

Zarif is expected to depart for Nicaraguan capital, Managua in the coming hours.

Iran and Cuba on Monday signed a memorandum of understanding to boost their economic cooperation. The cooperation document was signed on the sidelines of the first joint trade meeting of Iran and Cuba.

Heading a 120-member delegation, Zarif arrived in Cuba on Sunday night on the first leg of his Latin American tour.

He will visit Nicaragua, Ecuador, Chile, Bolivia and Venezuela, respectively after visiting Cuba and during his week-long tour.

Iranian foreign minister will stay in one country each day and hold talks with senior officials of the six countries on his itinerary.