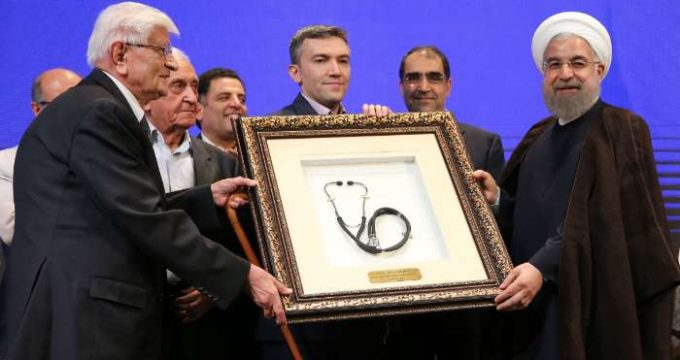 “The least that can be said about Joint Comprehensive Plan of Action (JCPOA) is that it guaranteed people’s health better and in other fields added to the nation’s dignity,” President said in a gathering to mark the national Doctors’ Day.

August 22 is celebrated by Iranians nationwide as the national Doctors’ Day to mark the birth anniversary of Abu Ali Sina, known in the West as Avicenna. The occasion is commonly celebrated in healthcare organizations to recognize the contributions of physicians to individual lives and communities.

Addressing a large group of Iranian doctors and those working in different fields of healthcare sector, President Rouhani said physicians are the best judges who can confirm how the JCPOA facilitated providing medicine and medical equipment for Iranians.

In the post-JCPOA era, Iranian pharmaceutical sector found a better connection with and easy access to their foreign counterparts, added the President.

He stressed that lifting the anti-Iran sanctions as a result of the implementation of the landmark nuclear deal with the world six major powers, made it easier for the Iranian healthcare sector to get better pharmaceutical services.

“The anti-Iran resolutions could not be tore up here, if it were possible, I would do that myself. The solution was to nullify them in the UN Security Council through legal mechanisms,” President Rouhani stressed.