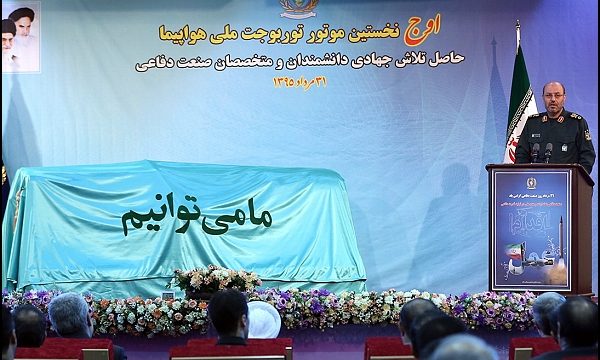 Speaking to reporters, Brig. Gen. Dehghan said the first homemade turbojet engine has been fully designed and manufactured by Iranian experts at the order of the Leader; “the engine marks one of the most complicated aerospace products which has been accomplished without even the slightest foreign interference.”

“Upon reaching the final product, Iran would become self-sufficient in making turbojet engines by joining the eight countries who possess the relevant technology,” he underlined.

The minister outlined that engine is the heart of an aircraft asserting “the first Iranian turbojet engine’s operating altitude reaches 50,000 feet and can be installed on various aircraft with maximum takeoff weight of 10 tons.”

Dehghan, while highlighting the complication involved in engine manufacturing, said the achievement marks a leap in the country’s aviation industry and acts as a platform for Iran’s entry to the field of designing and constructing heavy and semi-heavy turbofan and turboshaft engines.

The official further reiterated the complicated and intricate processes involved in designing and constructing numerous parts inside the engine, said design and construction of the first prototype turbojet engine will significantly boost Iran’s position in terms of modern science and technology both in the region and world; “another advantage of the major national achievement include increased national self-esteem in line with accelerated defense progress to protect the country’s airspace and national interests.”

He also expressed hope that Iran will manufacture maritime cruise missiles with supersonic speed in near future.

The commander pointed to the substantial measures taken in area of cruise missiles adding “we have attained whatever we were looking for in the field as we have multiplied and increased the accuracy of navigation systems.”

“Rocket ranges have become threefold and their functions have become diversified,” he continued maintaining “the defense industry now enjoys a kind of unity and interconnectedness which has led to synergy and increased capability.”

He further underscored that the Defense Ministry is now collaborating with more than 3150 national firms as well as 92 universities; “the outcome of Iran’s innovative outlook has been a fourfold rise in production capacity which results from taking proper advantage of domestic opportunities.”

At the end of his remarks, Iran’s minister of defense appreciated guidelines and supports of the Leader, the Iranian President as well as all organizations and agents involved in completion of Ouj project.