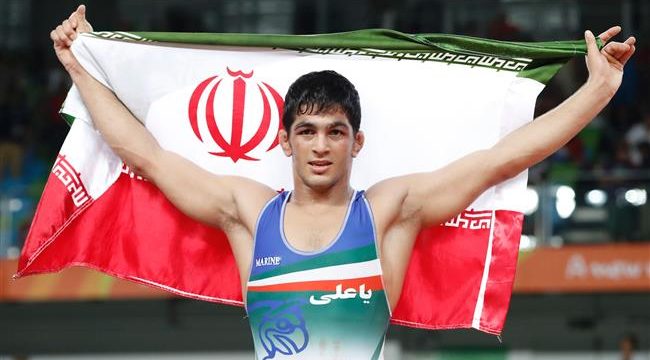 Iranian freestyle wrestlers Hassan Yazdani Cherati and Hassan Rahimi have adeptly employed a mix of primal hand-to-hand combat and complex tactics at the wrestling competitions of the 2016 Summer Olympics in Rio de Janeiro, Brazil, and picked up two medals, including one gold.

On Friday, the 21-year-old Yazdani Cherati, who had received a bye in his opening round contest of men’s 74kg freestyle weight category, outmuscled Haitian wrestler Asnage Castelly by 10 points to 0 in the first contest at the indoor Carioca Arena 2 stadium in Rio’s western district of Barra da Tijuca.

He then prevailed over his Turkish opponent Soner Demirtas 7-0 in the next challenge to march into the semifinal round.

Yazdani Cherati downed his Kazakh rival Galymzhan Usserbayev 10-0 by technical fall in the semifinal, and qualified for the final encounter.

Yazdani scored a takedown just seconds to the end of the final bout to defeat 29-year-old Russian Aniuar Geduev and collect the gold medal for the Islamic Republic of Iran.

Yazdani was down 6-2 at one point to Geduev but rallied despite continued stops exposing the Russian athlete on his last move to win 6-6 on criteria.

The Iranian athlete’s medal is the country’s first Olympic gold in freestyle wrestling since the Sydney games in 2000.

While Rahimi had a 9-0 lead over his Cuban opponent, he pinned Rodriguez’s shoulders to the mat to win the bout by a fall in the third round and collect the bronze medal.

Rahimi, who had a bye in the first round, overpowered Armenian wrestler Garnik Mnatsakanyan 13-0 in the second, before overcoming Russia’s representative Victor Lebedev 6-1 in the quarterfinals.

The 27-year-old Iranian sportsman however conceded a 5-10 defeat from Japan’s Rei Higuchi in the semifinal, and had to appear in the bronze medal bout.