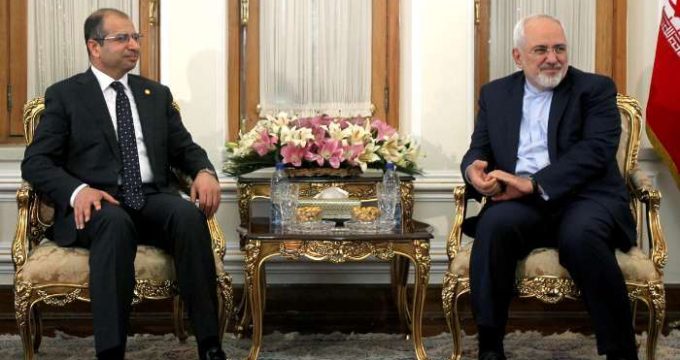 “We believe that cooperation in the region should include the presence and partnership of all (regional) countries,” the top Iranian diplomat said at a meeting with Iraq’s Parliament Speaker Salim al-Jabouri in Tehran on Saturday.

He added that Iran is not after skirmishes and unhealthy rivalry in the region.

Iran considers escalatory moves by certain countries as detrimental to the whole region, Zarif underlined, calling for efforts to make sure that no party will serve the interests of those who do not want the good of the region.

As regards the crisis in Iraq, the Iranian minister stressed the need for unity among all Iraqi sects, tribes and religions in the face of the ill-wishers that provoke rift and sectarian strife in the Arab country.

He further reaffirmed Iran’s support for the Iraqi government and nation in all circumstances.

The Iraqi speaker, for his part, expressed gratitude to Iran for its unwavering support for the Iraqi nation in the fight against terrorism.

Describing terrorism as the greatest and most immediate threat to the entire region, Jabouri emphasized that rapport and unity will lead to victory against terrorism and return of calm to Iraq.

Jabouri arrived in Tehran on Saturday morning for talks with senior Iranian officials on the latest developments in his country.

Iran and Iraq have enjoyed growing ties ever since the overthrow of the former Iraqi dictator, Saddam Hussein in 2003.

Iran, a close ally of Iraq, has been also supporting the Arab nation in the fight against Daesh (ISIL) since the terrorist group invaded Iraq in summer 2014.