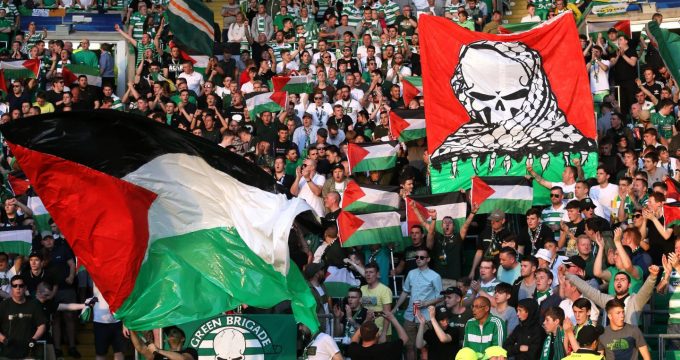 Sections of Celtic Park in Glasgow became a sea of green , red, black and white as the Scots refused to adhere to a UEFA ban on the protest against Israeli policies in East Jerusalem, the West Bank and the Gaza Strip

The team, who are the current Scottish champions, could face sanctions from UEFA for failing to prevent fans from bringing Palestinian flags into the stadium in violation of the ban. The body outlaws political protests at matches, as outlined in Article 16 of the European footballing body’s regulations.

It fined Celtic $20,750 in 2014 for fans waving Palestinian flags in a match against Icelandic outfit KR Reykjavik. They did so in protest at the Israeli military’s operation in Gaza that was taking place at the same time. The seven-week conflict left more than 2,200 Palestinians and 73 Israelis dead.

Activists from the Palestine Alliance group had handed out fliers and flags prior to kick-off, detailing why the protest was going ahead and mentioning the 1948 conflict that resulted in the creation of the State of Israel—what Palestinians now refer to as the Nakba, or catastrophe. Part of the protest was organized on Facebook via an event page entitled “Fly the flag for Palestine, for Celtic, for Justice,” that more than 1,000 people said they were attending.

A statement released by a group called Celtic Fans for Palestine before the game read: “When someone is representing Israeli state institutions, it is sadly never merely a game. Football, UEFA and Celtic FC are being used to whitewash Israel’s true nature and give this rogue state an air of normality and acceptance it should not and cannot enjoy until its impunity ends and it is answerable to international law and faces sanctions for the countless U.N. resolutions it had breached.”

Celtic is a football club with Irish Roman Catholic roots and the majority of the fans are Catholic. Irish Catholics are known for being notably pro-Palestinian in their leaning on the Israeli-Palestinian conflict, with many viewing the Palestinian cause as similar to that of the Irish under British occupation in Northern Ireland. Israel maintains a military occupation over Palestinians in the West Bank and a blockade on the Gaza Strip.

A representative from Hapoel Beer Sheva is yet to comment on the political protest but a spokesperson from the club declined to comment when requested by Israeli media outlets.

While the stands became a political staging ground, the game itself saw Celtic run out 5-2 winners in the first-leg of the crucial Champions League play-off, with the winner over two games heading into the elite European tournament’s group stages. The second leg in Israel is scheduled for next week.