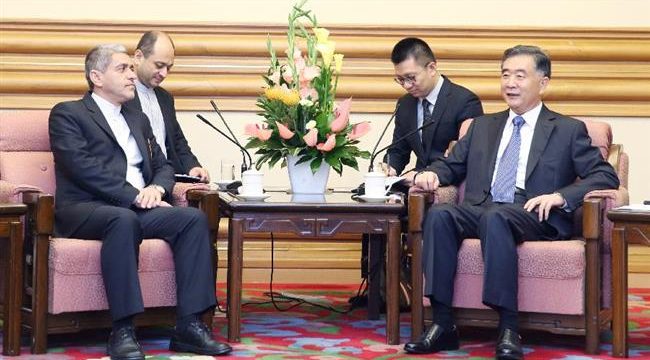 Iran says it has signed two memorandums of understanding (MoUs) with two major Chinese banks to provide loans for its key development projects.

The banks that will provide the loans to Iran are the Export-Import Bank of China (EXIM) and China Development Bank (CDB).  They signed the MoUs with Iran during a visit to Beijing by the country’s Minister of Economy and Financial Affairs Ali Tayyebnia.

EXIM had already signed another basic agreement with Iran to finance a high-speed train service between Iran’s capital Tehran and Mashhad in the north-eastern province of Khorasan Razavi.  The bank signed the agreement with Iran’s Ministry of Roads and Urban Development in January.

Tayebnia arrived in Beijing on Monday at the head of a high-ranking delegation to participate the 16th meeting of the Iran-China joint economic commission, which was held on Tuesday and Wednesday.

The Iranian minister later met China’s Vice Premier Wang Yang who urged Iran to take their bilateral cooperation to the next level.

“The two sides should…step up pragmatic cooperation in all sectors to push bilateral cooperation to a new high,” Wang was quoted by the Xinhua news agency as saying in Beijing.

The latest official figures show that China was the main exporter of goods to Iran over a period of four months starting 20 March 2016.  Its exports to the Islamic Republic accounted for 22.86 percent of Iran’s total imports in terms of value and 13.88 percent in terms of volume.

Also, figures show that Iran exported 11 million tons of non-oil goods, worth $2.937 billion, to China during the period.