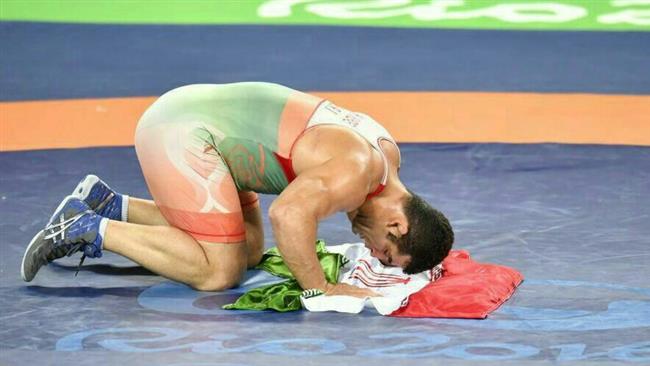 Ghasem Rezaei who had an Olympics title as a gold medalist in 2012 London games had an off draw in first round. In second round he faced Luillys Pérez from Venezuela who was an easy job for him and Rezaei won the match 8-0. In his second match, however, Ghasem Rezaei couldn’t defeat Cuban wrestler Yasmany Daniel Lugo Cabrera and conceded a 4-0 loss.

With his Cuban rival managing to ascend to final game, Rezaei was given another chance to fight for a bronze medal. In this level he stood against Xiao Di from China and defeating him 7-0 opened his way to fight for third place.

Ghasem Rezaei in his last game stood in front of Carl Fredrik Stefan Schoen from Sweden. Schoen went up 4-0 after a takedown and gut wrench in the first period. The Iranian battled back in the second period, scoring with back-to-back gut wrenches to make the score 4-4 and ultimately give him the victory on criteria.

Ghasem Rezaei’s bronze medal brought fourth medal to the Iranian camp after weightlifting champions Kiyanoush Rostami and Sohrab Moradi’s gold medals and a bronze which was grabbed by Saeid Abdevali in freestyle wrestling.