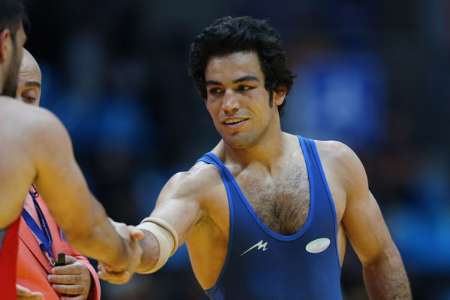 In a shocking upset for the Islamic Republic of Iran’s contingent at the 2016 Summer Olympics in Rio de Janeiro, Brazil, Greco-Roman wrestler and medal hope Habibollah Akhlaghi has been eliminated at the high-status sporting event.

In the repêchage round 2 on Monday evening, the 31-year-old Iranian sportsman lost to Germany’s Denis Maksymilian Kudla (3-1) who later went on to beat Hungary’s Viktor Lőrincz to win a bronze.

Earlier, Akhlaghi bested Azerbaijan’s Saman Tahmasebi after losing by a technical fall to Russian opponent Davit Chakvetadze in an octafinal round contest of the men’s 85-kilogram weight category in Carioca Arena 2.

Akhlaghi had earlier adroitly employed a mix of primal hand-to-hand combat and complex tactics and got off to an impressive start. He downed Zakarias Berg of Sweden 4-0 in his first bout at the qualification round.