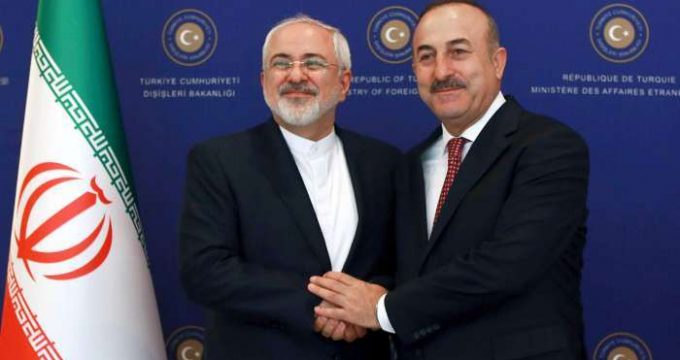 Ankara hosts Iranian FM; what visit mean to both sides?

Zarif’s visit of Ankara is the first visit of a top Iranian political official following a failed coup in Turkey last month. Tehran since the first hours of the military coup condemned the move, expressing strong position in support of President Erdogan. This issue made many analysts to talk about opening of new page in the political relations of Iran and Turkey following the power grab bid in Turkey. Many Turkish officials in the days after coup lauded Iran’s stances in support of their president. Riza Hakan Tekin, the Turkish ambassador to Iran, in a press conference in the Turkish embassy thanked Tehran for its standing.

Now Zarif’s Ankara visit is analyzed as an effort to deepen ties of the two neighboring countries. Although during the past 15 years they never experienced hostile and tense relations between them, however, the Syrian crisis has made the two big West Asian countries fail to have warm and friendly relations during the past four years.

But Iran’s clear stances on the recent military coup made the Turkish foreign policy administration more willing to develop ties with its Eastern neighbor than its Western partners. So, the visit of the Iranian FM can be seen as part of these new developments that began to roll on after the coup. During the visit, the Turkish FM Cavusoglu said: “I thank my brother Mohammad Javad Zarif for visiting Turkey.”

He continued: “In the initial hours and when there was not a clear picture of the situation, he several times phoned me, expressing support for the government and people of Turkey in the face of the coup plotters.” This timely Iranian stances came while the Western leaders took belated positions against the coup in Turkey. Talking to Euronews, Erdogan has criticized the Western leaders’ positions that he said contained evasive and ambiguous words and sentences following the coup.

In addition to expansion of bilateral ties of Tehran and Ankara, what makes Zarif’s Turkey visit so significant and outstanding is its coincidence with an array of important regional developments. Iranian FM’s visit to Turkey comes just two days after Erdogan met his Russian counterpart Vladimir Putin in St. Petersburg, the result of which was ending a 7-month political rift between Moscow and Ankara. Perhaps this non-accidental frequency of visits can come as part of the possibility of opening a new stage and prompting potential changes in regional policies of Ankara. The regional developments have put Ankara in one camp and Tehran and Moscow in another camp.

Although Erdogan’s government insists that up to now its policy has not changed in dealing with the Syrian conflict, the news about formation of a bilateral Turkish-Russian commission on Syrian crisis following Erdogan-Putin meeting confirm that a change in policy of Turkey at least in the medium term is possible. In addition to this bilateral commission, Zarif’s visit to Turkey had strengthened likeliness of formation of a coalition comprised of Russia, Turkey, and Iran to find a solution for the conflict in Syria.

This coalition can lead to considerable field changes especially in Syria’s northern regions next to Turkish borders. The coalition is actually a ray of hope in the five years of devastating crisis of Syria. Furthermore, these changes in Ankara foreign policy at least can scale down Erdogan’s fiery criticism of the Syrian government. In next steps, the changes can make Turkish approach more realistic in dealing with the Syrian crisis. It can make Ankara approve of the legitimate President Assad’s government rather than supporting the takfiri and rebel forces on the ground. Although in the short run it is unlikely to see this, the battlefield developments in the region and in Syria itself, including a full defeat of the terrorists in Aleppo battle can force Turkey to pursue the alternative approach.