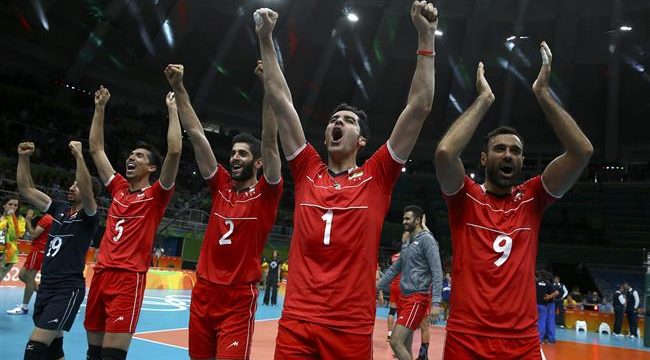 Iran’s national volleyball team has pummeled Egypt to achieve its second victory in a row at the volleyball tournament in the 2016 Summer Olympics in Rio de Janeiro.

The Iranian volleyball squad blanked Egypt 3-0 (28-26, 25-22 and 25-16) in their penultimate Group B game at the preliminary round of the competitions at the indoor Ginásio Gilberto Cardoso arena in the northern Maracanã neighborhood of Rio.

In other matches of the day, the Netherlands beat Puerto Rico 3-0, Russia blanked Japan 3-0, and Brazil hammered South Korea 3-0.

Iran national volleyball team, which has already booked a place at the quarterfinal round of the Rio Olympic Games, will face Russia at its last preliminary round match at 10:30 p.m. Tehran time (1830 GMT) on Monday.

The volleyball tournament at the 2016 Rio Olympic Games in Brazil started on August 6 and will finish on August 21.

The Islamic Republic of Iran is in Pool B with Argentina, Cuba, Egypt, Poland and Russia.

Brazil, Canada, France, Italy, Mexico and the United States have been drawn in Pool A.